From the gallery: CHOOSING MEAT

This is the story of how an African King, a Greenwich Village hero, a former World Trade Center worker, a ceramics enthusiast and people who care came together.

Dusty Berke is a 9/11 hero. No she didn’t rush into the burning buildings to save people, nor did she ever work at the site, but she is an impassioned community activist.

Tiles For America was started shortly after the attack. It is an empty lot owned by the MTA (M.ass T.ransit A.authority) with a simple chain link fence around it. It is right across the street from what used to be 150 year old St. Vincent’s Hospital. (I say ‘used to be’, because greedy politicians such as Mayor Bloomberg and councilwoman Christine Quinn saw to it that after the hospital went bankrupt in 2010 – it was quickly turned into a giant condominium complex, leaving all of Greenwich Village and lower west side Manhattan without a hospital.) St. Vincent’s handled the cholera epidemic of 1849, took in the only survivors of The Titanic. It was at the center of the AIDS epidemic and took in the first survivors of the World Trade Center 9/11 attack and in 2009 cared for the passengers of ‘the miracle on the Hudson‘ – the landing of Airways flight 1549 by Capt. Chesley B. Sullenberger III. The poet Edna St. Vincent Millay got her middle name from the hospital.

Just hours after the attack, loved ones rushed to the hospital clutching quickly made flyers looking for their loved ones. The hope was, their loved ones would yet be found under the rubble, perhaps were passed out inside the hospital or were wandering around the city in a daze. They gathered outside the hospital and across the street at the empty lot waiting and waiting….and waiting. Volunteers came from the community with clothing, blankets, food and offers to donate blood for 2,998 victims that were never to arrive at the hospital. The anxious hours that passed turned into days which turned into weeks. The gathering place for survivors was along side this empty lot.

Local resident Lorrie Veasy who was the owner of a paint your own pottery shop called ’Our Name Is Mud’ came to the hospital with her husband to donate blood the day of the attack. Wanting to do more and to reach out and comfort those who waited and to comfort a community, she created 500 ceramic angel and flag tiles and attached them to the fence. Customers came to the shop to make tiles of their own. ‘Texas loves you!‘, ‘We will never forget’, ‘God bless the USA’, ‘In loving memory of…‘. Videos of the tiles made it onto the internet and soon school children and people of all ages from around the world started to send their own hand painted tiles to the store to be put onto the fence. Germany, Spain, England, Israel. From Maine to Alaska tiles arrived and created a place of hope and comfort. For eleven years the tiles became a tourist destination. A place of pride in the community. A place to remember and never forget.

‘Our Name Is Mud’ sadly went out of business, but right around the corner, lives Dusty Berke, a long time Greenwich Village resident who was and is determined to preserve the tiles memorial. ‘The Tiles For America Preservation Society’ was founded by her. In 2011, the ten year anniversary of 9/11, hurricane Irene threatened to devastate lower Manhattan and possibly the tiles. Dusty quickly gathered a group of scrappy volunteers who within hours took down all the tiles and brought them to safety. When all was clear they were lovingly re-hung on the fence.

In the meantime . . . in 2010, the MTA was planning to construct an air shaft on the lot and that plan came to reality early this year. The tiles? They were to be ‘put in storage’ in Albany. The community’s faith in that idea was nonexistent, especially to Dusty Berke. Along with local residents Paul McClure, Andretti Mullens and friends, a call went out on the street and the internet. 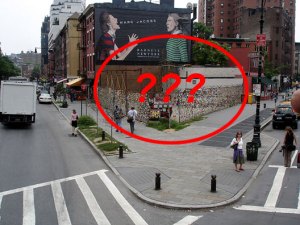 As a local tour guide, I pass by this lot every week and could not believe my eyes, nor contain my anger when I saw posted signs pleading to help save New York’s first 9/11 memorial. You see, in 1983 I got a job at The World Trade Center as a space planner at the design firm Dancker & Sellew. We worked in the clouds on the 102nd floor. At the time I lived in Brooklyn Heights and would walk across the Brooklyn Bridge every morning towards the two shimmering towers. The view from the top was breathtaking. In stormy weather the building swayed to and fro. We would hang magic markers from the ceiling and watch them make the same pattern on the paper on our desks over and over again. It was surreal. Wonderfully surreal and I was so, so proud to work there. To my luck, our lease was up several years later and the company relocated elsewhere downtown. The thought of these tiles also coming down was incomprehensible to me. On a rainy August 14th I joined Dusty and her friends and we gathered on the sidewalk and determinedly asked anyone who passed by to sign a petition to save the tiles.  The mood was optimistic. But eventually the word was out the demolition crews were coming and September 11, 2012 was to be the last day of the tiles thanks to the callousness of our politicians. As a born and raised New Yorker and as a photographer, I made it a mission to photograph all of the tiles. A memorial concert was held on September 11th. The next morning we waited and waited and waited. When were the bulldozers due?

Dusty and Andretti were busy buying packing materials to rescue the tiles. The fence may belong to the city, but the tiles – belong to the citizens of the world. Every day I contacted Dusty, ‘call me when you’re taking down the tiles!’. Wednesday September 12th passed, I took some more pictures. Thursday September 13th I showed up, no one was there. Word was the demolition was to take place Monday, September 17th.  On September 14th, I assist mom in taking our dog to the vet. I received a phone call.

It was ‘Ladi’, His Royal Highness James Burehmo, to be exact . . . King James Oladipo Aroko-Ola Burehmo the Oba of Idera in Nigeria. A true African king. He leaves his village as king, and comes to New York every summer as a Gray Line tour bus driver to earn money for his people. When I worked for Gray Line as a tour guide, Ladi and I became fast buddies and dear friends. Ladi, a gentle giant, always has a smile on his face. His voice instantly elicits joy and confidence. We have stayed in touch ever since. ‘Hans, I just passed by the tiles and they are boxing them up!’. My mother saw the look on my face, and she simply said ‘go’.

As I arrived, the last of the tiles were being taken down. Word had come a short time earlier that councilwoman Christine Quinn’s office had said they were taking ownership of the tiles, possibly threatening arrests. There was no time for Dusty or Andretti to do a phone or email blast. They rushed to the site, with many sets of pliers and boxes and hurriedly took down as many as they possibly could and asked any passerby to help. As the last of the tiles were coming down I arrived. Eleven years later and the fence was almost bare, the visual history temporarily erased for now. I looked up at the shell of what was St. Vincent’s Hospital and teared up as I saw the tiles being wrapped up. I photographed the moment as quickly as I could, upset I couldn’t be there right away, but time was of the essence. Passers by stopped in their tracks as what had become a routine sight, was now gone. 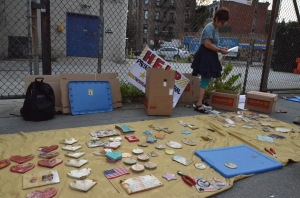 Andretti takes down the last tile

The tiles will live on, in respect to the 2,998 victims, the survivors, the community and those loving hearts and hands that painted the heartfelt messages on little square pieces of ceramic. The goal is to open a museum in an empty storefront across the street. It will be nice if the city and or construction workers will give us the rusty fence they are going to trash anyway. We hope to line the wall of the museum with that rusty chain link fence and hang the tiles once more. A memorial of survival, of determination and of love. As the sun set the last heart-shaped tile was packed up, the boxes closed in hopes of opening one day soon at the planning of the museum. The tiles are safe now, we are determined.

This is how an African King, a Greenwich Village hero, a former World Trade Center worker, a ceramics enthusiast and people who care came together, to save a piece of American history. 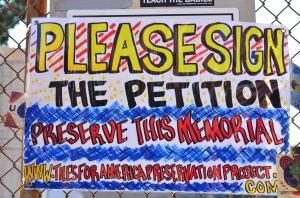