SOCIAL SECURITY STRIPS MY 88 YR OLD MOTHER OF HER 1958 USA CITIZENSHIP BECAUSE SHE “FAILED TO REPORT TO THE GOVERNMENT” WHEN SHE APPLIED FOR HER BENEFITS AFTER WORKING HARD IN THE USA FOR 33 YEARS!!

Social Security today made the most outrageous claim I have ever heard!!!
We went to the lower Manhattan Social Security office to seek a replacement card for mom. We had all the legal documents: USA passport, Social Security card and, government sealed naturalization papers. The barely literate woman told my mother that the Social Security office that makes her monthly benefit payments, (that mom worked hard for 33 years), has never recognized her as an American Citizen because (direct quote) “you failed to report to the government when you applied for your benefits.”
We were in shock and mom almost lost her balance with her cane as her blood pressure started to rise rapidly and she grew faint.
The SS worker claimed, that because her papers were so old, from 1958, the computer does not recognize her as a citizen. By her logic, any person who applied to become a naturalized citizen before the computer age, is NOT recognized as an American citizen.
We thought we were not hearing right. After repeatedly arguing with her, we were told to go to another office on another floor, but it was closed. We had taken a difficult arduous hot trip by bus and taxi ($25. each way) to apply for her replacement card. So we were handed a card with an 800 telephone number on it to further find out if mom is a citizen or not – after having voted in every damn election since 1958 and proudly voting her first time for President Kennedy in 1960!!!
The 800 left us on hold for over one hour, we never got through.
Mom is so distraught, she has become ill.
So America – this is this wonderful country we have. Unless you “report to the government” when you apply for your Social Security benefits and you were not born here, you are STRIPPED of your citizenship!!!
(I am going back tomorrow to the SS office the have it out with them.)

Dear all: Thank you all for your emotional and strong supportive comments. ! I went back to Social Security today and saw 2 more people who generally all had the audacity to say (with heavy broken Chinese/English) the same thing no matter what office or position they hold, it is like hitting your head against a brick wall or a bad nightmare you can’t wake up from. They all claim: Her 1958 docume…nt is too old and has to be sent to their offices (who knows where) to be verified. So they are taking a xerox copy and verifying THAT, while we have the original with a government seal in OUR hands! Furthermore, they say it is HER fault for not having known that when she became a citizen that she had to also notify Social Security that she had become an American vs. the other story that she should have “reported to the gov’t” when she retired – huh?!?!!! So – HOW did she get 4 USA passports in her lifetime? How did she get her SS card and benefits? My mother worked for the CEO of Manufacturer’s Hanover Bank, her security clearance was top level to work on the top executive floor-how did she get that?? And now, because of some idiots in the local office here, logic has flown out the window along with her citizenship?!?!?!! AND – they took her social security card away from her! We are left awaiting the pending “investigation”. You do not wish to hear mom’s foul opinion of this country right now, sorry guys…. I will next contact local politicians (NOT fake councilman Jimmy ‘camera ready’ van Bramer) and the news stations. We are emotionally and physically wiped out, mom is still too shakey to leave the house. Thank you ALL for your loving support.
JULY 24 UPDATE:
Social Security-gate UPDATE: They say “write your congressman” – I paid mine a visit! Congressman Joseph Crowley, 14th District, Queens and got results (we hope). I was met by his executive assistant Ms. Madrid whose first reaction was, “What more proof do you need?!”.
These are the facts: Immigration papers “pre computer age” have a different set of numbers and are truly not linked into today’s …Social Security computer system, an astonishing fact considering on the web site Ancestry.com you can look up birth/death/marriage/prison/burial records from the 1700’s! This is a HUGE failure on our government’s part.
Ms. Madrid had my mother sign a letter approving congressman Crowley investigating the matter, and immediately in front of me, called Social Security herself. You could hear the woman at the Social Security offices saying “Absolutely not! Absolutely not!”
MOM WAS AND STILL IS A NATURALIZED UNITED STATES CITIZEN ! !
The local office here, has to have someone physically look up the records (who knows where) and verify it’s her, despite the fact she is in their system and despite the fact we had alllllll the proof in the world. The entire situation comes down to (no racism intended) poor English and bad attitude. What should never, ever have been said to her, (twice!) is that she is not a citizen in the SS computer system – that is the result of poor translation on Chinese American women working at the office. Maybe it is their incorrect translation, maybe it was because we saw them at the end of the day and they were both in a foul mood, but either way we received (indirectly) an apology from the congressman, a confirmation of citizenship today, and told instead of the 4 week “research/waiting time”, it will just be the standard 2 week period for her.
In the meantime, our wonderful local WPIX11 TV news station, with the help of friend and their reporter Greg Mocker offered to help if, after 2 weeks there are no results.
Once again, mom and I thank you ALL for your quite passionate support !
God bless America . . .
News media and senators next . . .

PHOTO OF THE DAY: Writer’s Block

PHOTO OF THE DAY: Writer’s Block

Photo of the day: This morning’s subway breakfast is now being served . . . 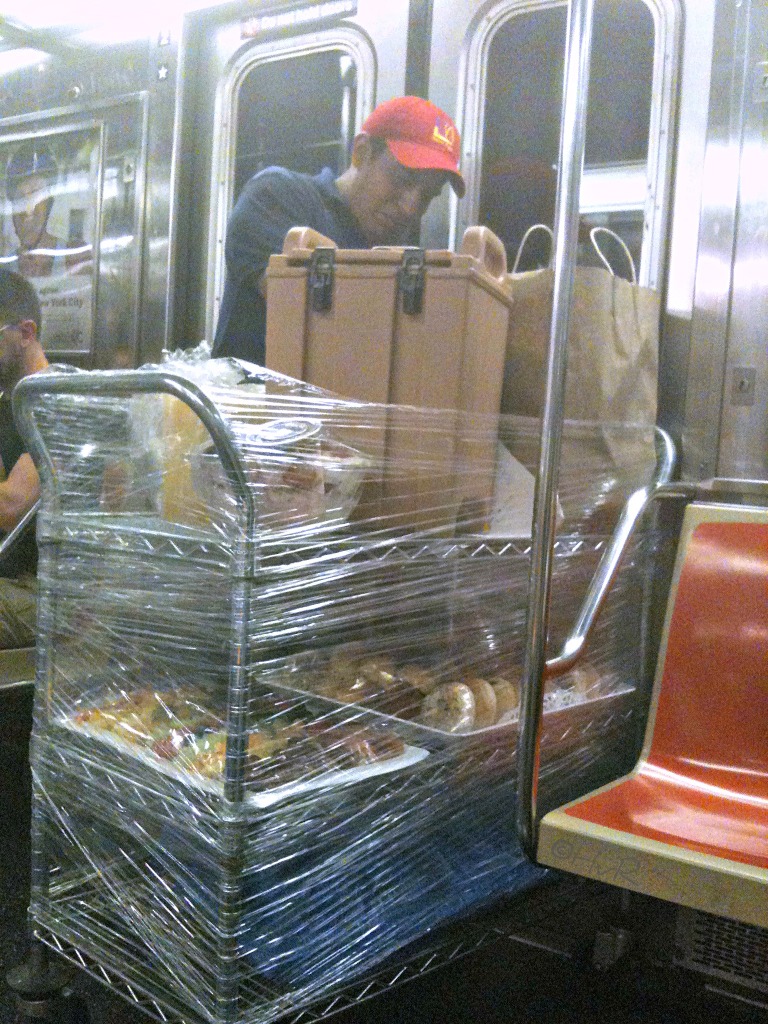 Photo of the day: This morning’s subway breakfast is now served . . . bagels, assorted fruits, coffee and fresh orange juice. You never know what to expect in a NYC subway 🙂

Photo of the day: HAPPY 4TH OF JULY !