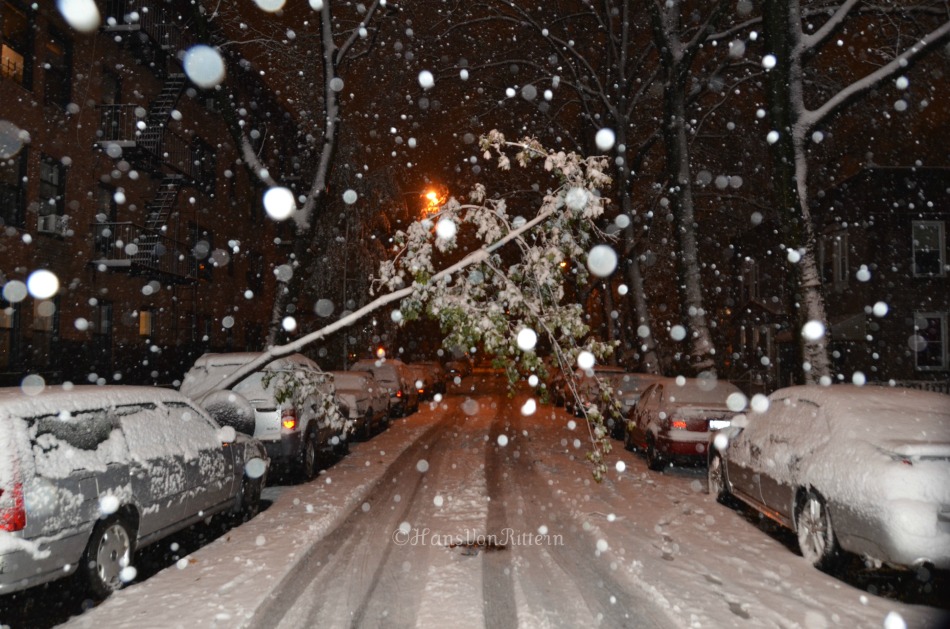 SILENT NIGHT, HOLY CR_P WHAT A NIGHT!: As if hurricane Sandy wasn’t enough, New York received 4 inches of snow, it’s the heaviest early snowfall in November ever last night. I walked just four blocks in my neighborhood of Sunnyside, Queens and witnessed four trees come crashing down. The trees still have their leaves and the very wet snowfall created too much of a weight burden that they can bear. We have such a dense canopy, I decided it was safer to head home than to continue taking pictures. It was a silent night, but a bit of an un-holy night.

(The white ‘dots’ in the photo, is the reflection of my camera’s flash on the snowflakes.)

Photo of the day: TWO GENERATIONS VOTED! WE DID IT!

TWO GENERATIONS CHANGE THE COURSE OF AMERICA: My mom Ursula Von Rittern 86, and Hans Von Rittern (me, almost) 57 stood in line for two hours in the cold to exercise our right to have our voices heard. We voted! This morning we can breathe a sigh of relief. Because of all your kind words of support yesterday, I thought I would post a (self taken) close-up of the two of us on line. Ursula was overwhelmed at yesterday’s response and was gleeful and humbled that she got so many ‘likes’. “You made me famous” she giggled. We thank you all! XOXO

My 86 year old mother stood in line proudly and voted!

This is 86 year old Ursula Von Rittern, my mother. She immigrated to this country from war torn Germany after WWII and settled in NYC. She has voted with an absentee ballot for the past ten years so she doesn’t have to stand in the long lines. “This year I am voting in person dammit, no matter how long I have to stand in the cold, this is too critically important!” So – we did! GO MOM!
Note the black folding chair in one hand and her cane in the other, she came prepared!

VOTE WITH YOUR VAGINA 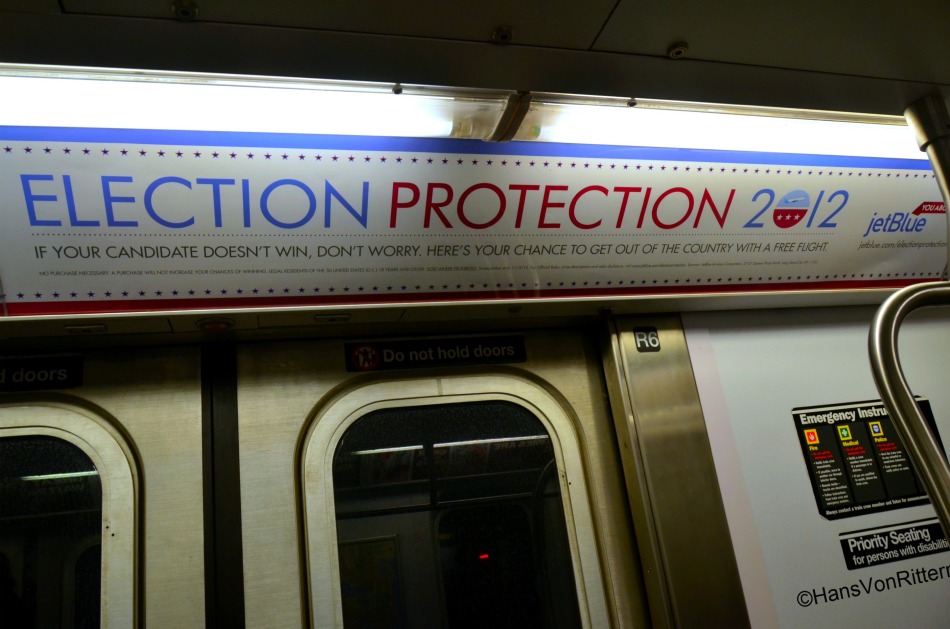 Photo of the day: IT’S GETTING DARK SO EARLY – Top 10 reasons you know daylight savings time is over 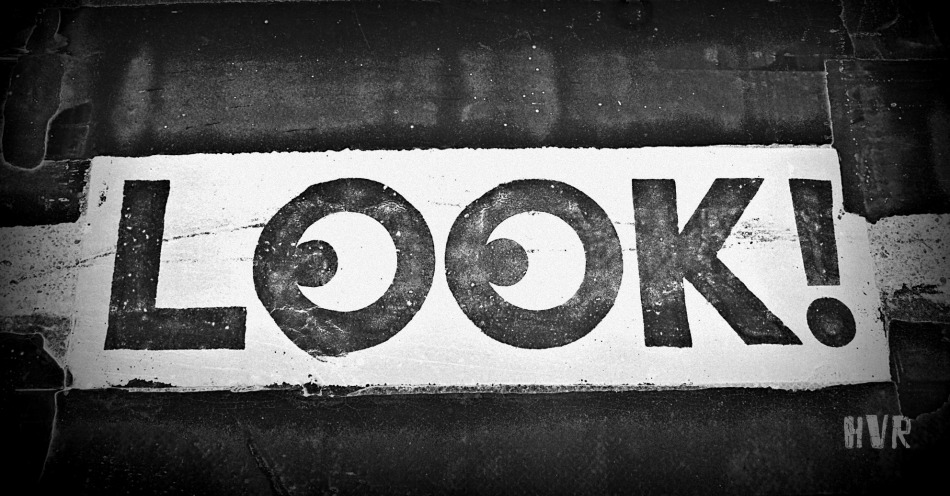 IT’S GETTING DARK SO EARLY: Top ten reasons you know daylight savings time is over.
1.You look up from your computer and all of a sudden it seems like midnight!
2. Your stomach growls at 6pm.
3. The time on none of the electric gadgets in your house matches.
4. You all of a sudden realize you don’t know where the instructions are for that new watch.
5. How DO you reset the time on this thing?!
6. You rely on the only correct time in the house, your TV and cell phone.
7. Your dog wants to go walkies earlier than usual.
8. All your friends seem to sign off earlier than usual on Facebook.
9. It seems like you’ve wasted the whole day at work since it’s dark when you go home.
10. You reallllly have to keep your eyes open to watch Leno or Letterman.

Photo of the day: “If I Could Turn Back Time” 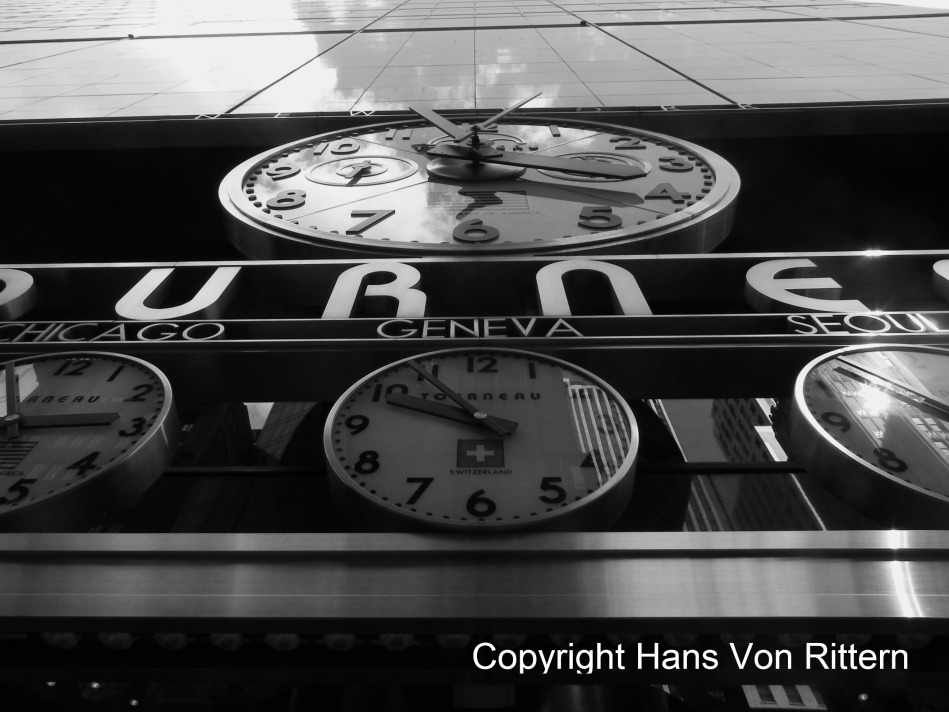 If I Could Turn Back Time
CHER lyrics
Songwriters: Warren,
Diane;

My world was shattered, I was torn apart
Like somebody took a
knife
And drove it deep in my heart
When you walked out that door
I
swore that I didn’t care
But I lost everything darling then and
there

I grew up on Rockaway Beach. My first time seeing the ocean was from this stretch of sand. My first sense memories of sand between your toes and then in your shoes comes from Rockaway. The smells were wonderful: the salt air, the wooden boardwalk had a certain indefinable smell, the sun tan lotion (usually Coppertone) wafting through the air and the hot dogs grilling at the beach stand.

For the first ten years of my life, 1955 to 1965, we were too poor to vacation ‘out of town’. Rockaway was the working man’s Riviera. The longest stretch of urban beach in the United States on a peninsula stretching out into the Atlantic. You took the bus or the  subway to get to the beach. We lived in Rego Park, Queens. We boarded the Q11 bus on Woodhaven Blvd. and then transferred to the ‘beach bus’ further down the blvd. It was a long arduous trek that took patience and stamina, but the rewards were well worth the two hour ride. If the buses were too crowded with teeny boppers and their transistor radios, you transferred to the scenic ’A’ train which took you over the bay with it’s little inlets and fisherman’s houses on stilts. It was a scenic journey in those old rattling subway cars with rattan seats, that now seems so much more romantic than it did at that time. I would give anything to relive that journey in one of those old subway cars again, they were different times. People had patience then, it wasn’t the era of hurry and rush, you accepted the fact that you would travel two hours by public transportation to get there.

The goal was 116th street. A wonderful honky tonk of old 2-story shops from the 1930’s hawking beach wear, surf boards, Italian ices, pizza and straw hats. Depending on how long it took to get there you quickly decided how much further up the beach you would walk to find a quieter spot away from the teenagers. (That meant of course, a longer walk back too). Right at the corner of 116th was an old wooden hotel that looked exactly like the Del Coronado hotel in the Marilyn Monroe film “Some Like It Hot”. The main floor was open with a huge open air old fashioned bar where you ordered your hot dogs and beer. Right across on the beach was the main life guard station which usually had the bikini girls right nearby. Planted strategically was the umbrella rental man. I remember the umbrellas distinctly, they were yellow and green horizontal striped. It was all on the honor system, you paid him, hauled the heavy wooden umbrella to your spot and were expected to return the umbrella yourself.

As it got hotter and your supplies ran low you would walk back to the old wooden hotel for more refreshments. It was sort of a badge of honor to have splinters in your feet to show you were tough enough to walk the splintery boardwalk back and forth without your flip-flops. Old biplanes would fly over head heralding the latest soft drink, radio station or local stores. Then there was the ice cream man. No – not in a truck, but a boy who carried a metal box with dry ice laden with Good Humor bars and orange drinks. “Ice cream and orange drinks heah!” We were in heaven. Portions of the beach to the left had stone jetties which created tidal pools, a place of fascination for a little boy. To the right were old wooden jetties with fisherman trying for their days catch. If you walked far enough to the right you would wind up at Riis Park. By 1965 it was the era of ‘Beach Blanket Bingo’, the Beach Boys, and surfer girls – tanning was a must. A good way to get an even tan was to take long walks. Those walks were wonderful, hunting for seashells, sea glass, and other little treasures of the sea. If you wanted to take a walk, you would ask your beach towel neighbor, “mind watching my stuff?” and off you went, sometimes for hours and your things would still be there upon your return. Incomprehensible in today’s times!

You timed your return home by whether or not you were going to stop at Playland, an old wooden amusement park that you would see in the old time black and white movies today. A rickety wooden rollercoaster called ‘The Atom Smasher‘, tunnel of love, games of chance, the smell of cotton candy was heady and the Nathan’s hot dogs were the best! It was a tough choice – sunset on the beach and a not so crowded long ride home, or, screaming thrills and a more crowded bus stop near Playland. Either way, you were lulled by the rocking of the old bus on your way home. Shoes filled with sand, sea shells clinking in your tin pail, sunburned arms and your beach towel smelling of sea air. Treasured memories.

My great-grandfather and grandfather were sea captains from Hamburg, Germany, they traveled the seven seas, the ocean is in our blood. So in the fall and in the winter, when the buses were empty and the beaches were quiet and desolate, we went to the beach for winter picnics and long introspective walks on the beach as the wind whirled the sea air through you hair. Searching for seashells was the best – no competition, that is when this picture was taken. The sound of the wind was like music, the ocean waves and the cries of the seagulls were so soothing. The old wooden boardwalk seemed ghostly without the sunbathers but it was as if it was our own private beach, just us and a few locals.  The silhouettes of the old wooden cottages looked like and Edward Hopper painting. Their colors blue, white and green with a little yellow here and there. The beach and boardwalk without the throngs seemed to go on forever and ever. Around 3pm we would head back to 116th  street where we would sip some hot cocoa and wait for the few buses to take us back.

In my teen years 116th street and the beach was the cool place to hang out with your friends and bring the latest 45’s to dance to on the beach as they played on your portable record player. We would have tanning contests to see who would come back the darkest from summer vacation, I won 3 out of 4 years in high school. In my junior year Susan Kopp won – she had used iodine and lemon juice mixed with her Coppertone (considered a death sentence today).

In my college years we traveled to the Caribbean for our vacations and the Rockaways became a thing of the  past. Now sadly it truly is with the destruction of hurricane Sandy. You never realize how much you  miss something until it is gone. What I wouldn’t give to have that one last hot dog or orangeade on the boardwalk “hot dogs and orange drinks, heah!”

Rockaway Beach is a part of me, it always will be.

Photo of the day: A ‘SPECIAL DAY’ IN NEW YORK 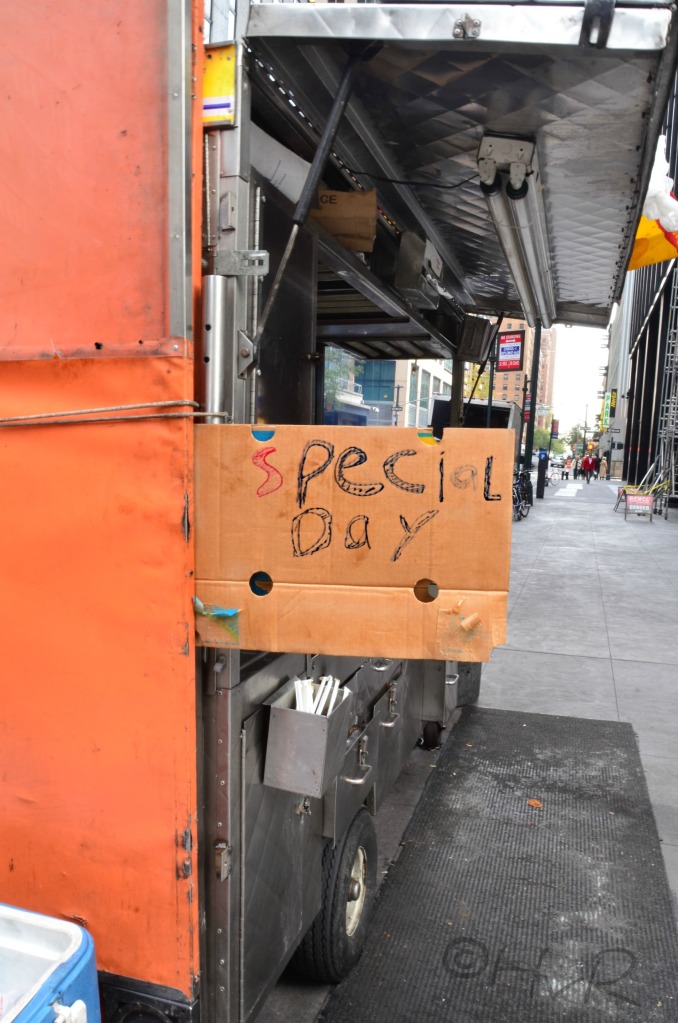 SPECIAL DAY: As New Yorkers struggle to get to work due to lack of electricity, subways, enough buses, lousy political leadership, gas shortages, roads impassible and some neighborhoods completely wiped off the map, life does go on. This street vendor amidst his lack of customers declared it a “Special Day.”

Photo & motto of the day: BUT THE WORLD CONTINUES TO GO ‘ROUND