Postcard story from New York – “MEMORIAL DAY 1931, THIS IN MEMORY OF OUR FOLKS WHO HAVE GONE AHEAD” 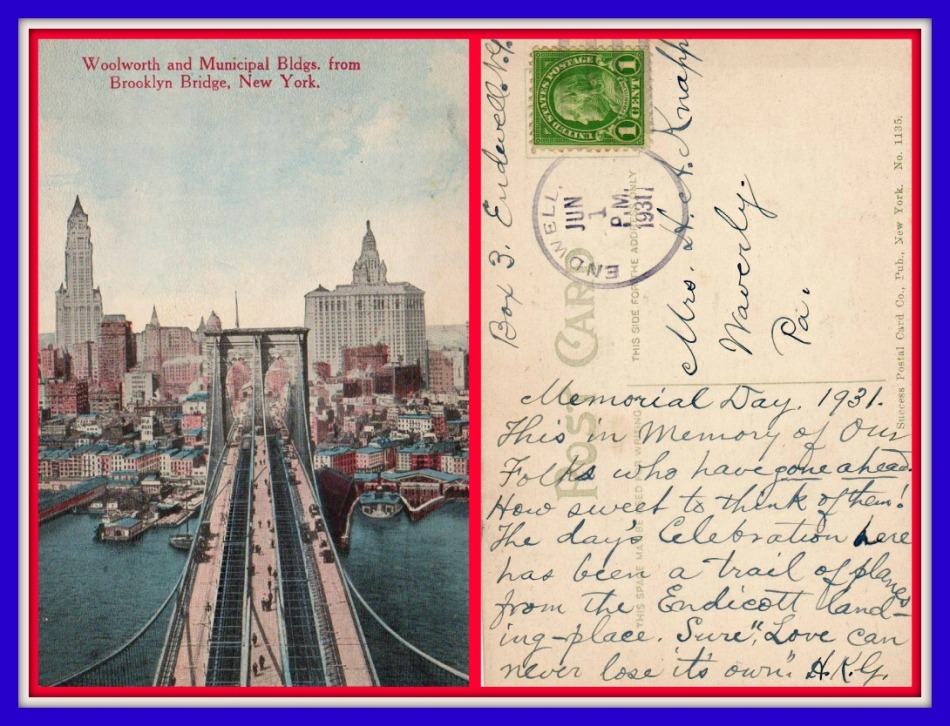 “Memorial Day 1931 This in Memory of our Folks who have gone ahead. How sweet to think of them! The day’s Celebration here has been a trail of planes from the Endicott landing place. Sure “Love can never lose it’s own.” H.K.__”

Her husband Henry A. Knapp (b.1851, d. 1931 the year this card was written) started as a filing clerk in Pennsylvania and rose to become a prominent lawyer who, in 1899, established the borough of Vandling in Lackawanna County, Pennsylvania. As of the 2010 census, Vandling has a population of 751.

The ‘Endicott landing-place’ refers to a landing strip that was to become the Tri-Cities Endicott Airport, established in 1936.

The poetic quote: “Love can never lose it’s own” is from a poem entitled “Snowbound/Firelight” by influential American Quaker poet John Greenleaf Whittier.

“…Yet Love will dream, and Faith will trust,

(Since He who knows our need is just,)

That somehow, somewhere, meet we must.

Alas for him who never sees

The stars shine through his cypress-trees!

Who, hopeless, lays his dead away,

Nor looks to see the breaking day

Across the mournful marbles play!

Who hath not learned, in hours of faith,

The truth to flesh and sense unknown,

That Life is ever lord of Death,

And Love can never lose its own!”

Postcard story from New York – “THE BROOKLYN BRIDGE – ‘THE JUMPING OFF PLACE‘ ” post card sent with a George Washington connection!

Postcard story from New York – “THE BROOKLYN BRIDGE – ‘THE JUMPING OFF PLACE‘ ” post card sent with a George Washington connection!

To: Miss May McCorkle

“The jumping off place”

A macabre sense of humor or did the sender really jump? No records have been kept of early day suicide jumps off the Brooklyn Bridge, so we will have to guess: joke or jump?

The addressee is rather an astonishing distinguished surprise! Miss Elizabeth May McCorkle of North Carolina, was wife to ruling church elder Mr. Orin Datus Davis.

Mr. Davis has served the church in various ways, including the guardianship of its invested funds. He has been its representative many times in Presbyteries and Synods, and was a Commissioner to meetings of the General Assembly in Lexington, Virginia, and Bristol, Tennessee. He also was founder of the Davis and Wiley Bank of North Carolina which dates back to the mid 1800’s.

In his married life Mr. Davis was fortunate as in other matters. Seeking guidance from the “Giver of all Good“, he selected Miss Elizabeth May McCorkle as his helpmate and companion in life aka wife. She is the eldest daughter of the late James M. McCorkle, Esq., a leading lawyer of the Salisbury Bar, and a lineal descendant of Colonel Richard Brandon of Revolutionary fame. Colonel Brandon’s daughter, Elizabeth, it will be remembered, was the “little woman” who provided a hasty breakfast for General George Washington on the occasion of his visit to Salisbury in 1781 ! So Elizabeth May McCorkle is the daughter of the “little woman” who served George Washington breakfast. Amazing the things you discover when researching old postcards!! 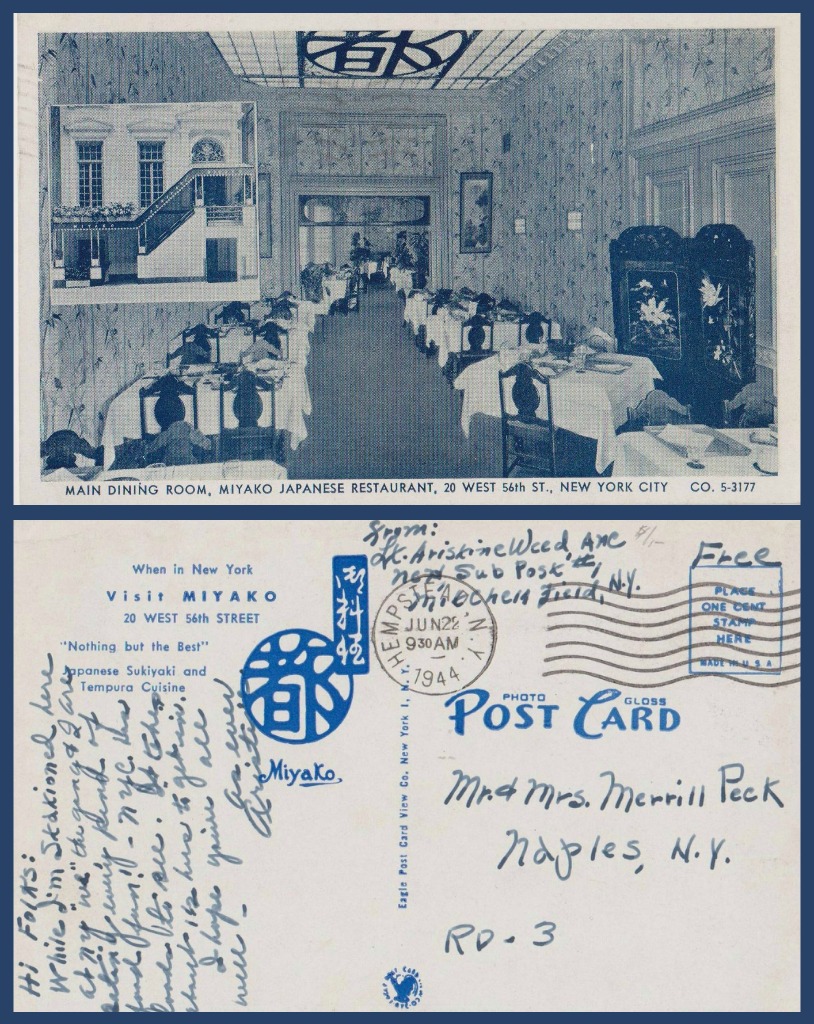 POSTCARD STORIES FROM NEW YORK – AAC LIEUTENANT visits MIYAKO RESTAURANT 1944
Description: When in New York visit MIYAKO, 20 West 56th Street. “Nothing but the best.” Japanese Sukiyaki and Tempura cuisine.
To: Mr. + Mrs. Merrill Peck
Naples, NY Ro. 3
From: Lt. Ariskine Weed AAC
New Sub Post #1
Mitchell Field*, N.Y.
June 22, 1944
Hi Folks:,
While I’m stationed here at NY “we” the gang & I are eating every kind of food, fun! N.Y.C. has loads to see. It takes about 1-1/2 hrs to “get in.” I hope you’re all well –
As ever, Ariskine
* Mitchell Air Force base was located in Hempstead, Long Island from 1918-1961. Having researched the lieutenant, he heralded from Naples, Florida and was still alive in 1945 in the Army Air Corps.

Today launches a new series called “Postcard Stories from New York”. Each week I will feature a vintage postcard sent to a loved one from the Big Apple New York City. Let’s see what thread they will weave over time. Here is the premier card:

Mondays on Memory Lane: DINING AT STOUFFER’S “TOP OF THE SIX’S” 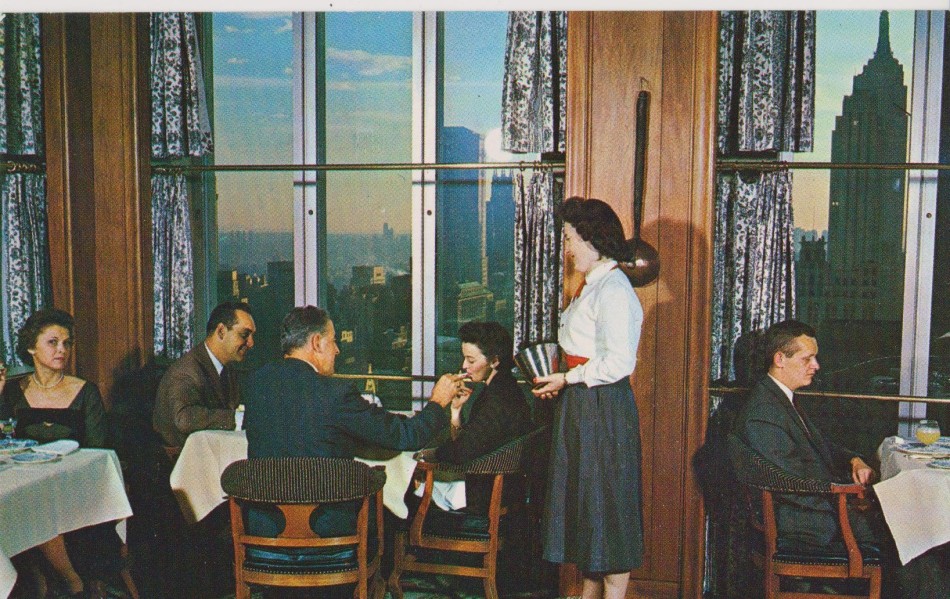 Mondays on Memory Lane: STOUFFERS ‘TOP OF THE SIX’S’ RESTAURANT – As a child, “Top of The Six’s” meant a special occasion. You had done well in school or it was prom night or you were in love and wanted to impress with the sweeping view of the Empire State Building. The rooftop restaurant was located at the epicenter of the posh section of Fifth Avenue, between 52nd/53rd Streets, with a lobby fountain wall designed by Isamu Noguchi and easy subway access downstairs. Today it is but a postcard memory.

It all started in 1922 the Stouffer family opened a lunch counter on East Ninth St. in downtown Cleveland, Ohio. They sold sandwiches, dairy products and Lena Stouffer’s soon-to-be-famous deep-dish Dutch apple pie. By 1935 they expanded to six restaurants in the Cleveland area and in 1937 they opened the first Stouffer restaurant in New York City.

In 1946 Stouffer’s opened on Shaker Square and at the Westgate shopping center in the Cleveland suburbs. It was at the Shaker Square location that patrons began requesting takeout orders of items on the menu and the Stouffer foray in to frozen food began by 1954. By this time Stouffer’s had restaurants in Florida, Philadelphia, Atlanta and Detroit.

1958 – Opens restaurants at the stainless steel deco-like #666 Tishman Building (built 1957) located at 666 5th Avenue in New York City one on the 1st & below-street levels, the other on the 39th floor, at the time the highest public restaurant in N.Y. They went there, by the millions. In July 1973, about 15 years after it opened, the restaurant announced that it was about to serve its 10 millionth meal. Ominously, a review that month found the cuisine anything but haute.

They continued to expand, building a frozen food processing plant in Solon, Ohio in 1968 and they ventured into specialty casual dining eateries with names like Rusty Scupper, Cheese Cellar and the Grog Shop. In 1969 NASA chose Stouffer’s products for Apollo 11, 12 and 14 for astronauts to dine on.

But it was the Stouffer’s “Top of the…” restaurants that became the special occasion places to go. “Top of The Hub” in Boston, “Top of the Rock” in downtown Chicago, “Top of the Sixes” in New York City, “Top of the Flame” in Detroit and “Top of the Town” in Cleveland.

The view was terrific from 40 stories up, especially in those days long before the World Trade Center, when a restaurant on top of a skyscraper was a novelty. Prices were reasonable. Children liked the view, and so did young couples on dates. Men proposed to their wives there,” it was a time when going to ”the city” meant journeying from Queens to Manhattan. You didn’t necessarily go there for the food, it was that wonderful atmosphere.

On September 18, 1996, The New York Times announced the closing of this beloved rooftop gem. The new tenant would be the Grand Havana Room, a cigar temple that will bear as much resemblance to a smoke-filled parlor as, say, the Oak Room at the Plaza Hotel. Right now I’d give anything for a mid-west cooked Stouffer’s meal atop of the Six’s. The best I can do, is to go to my rooftop, spread a tablecloth and open my microwaved Stouffers dinner – it’s just not the same.

What are your memories of “Top of the Six’s”?