Posts tagged ““Top of the Flame” in Detroit”

Mondays on Memory Lane: DINING AT STOUFFER’S “TOP OF THE SIX’S”

Mondays on Memory Lane: STOUFFERS ‘TOP OF THE SIX’S’ RESTAURANT – As a child, “Top of The Six’s” meant a special occasion. You had done well in school or it was prom night or you were in love and wanted to impress with the sweeping view of the Empire State Building. The rooftop restaurant was located at the epicenter of the posh section of Fifth Avenue, between 52nd/53rd Streets, with a lobby fountain wall designed by Isamu Noguchi and easy subway access downstairs. Today it is but a postcard memory.

It all started in 1922 the Stouffer family opened a lunch counter on East Ninth St. in downtown Cleveland, Ohio. They sold sandwiches, dairy products and Lena Stouffer’s soon-to-be-famous deep-dish Dutch apple pie. By 1935 they expanded to six restaurants in the Cleveland area and in 1937 they opened the first Stouffer restaurant in New York City.

In 1946 Stouffer’s opened on Shaker Square and at the Westgate shopping center in the Cleveland suburbs. It was at the Shaker Square location that patrons began requesting takeout orders of items on the menu and the Stouffer foray in to frozen food began by 1954. By this time Stouffer’s had restaurants in Florida, Philadelphia, Atlanta and Detroit.

1958 – Opens restaurants at the stainless steel deco-like #666 Tishman Building (built 1957) located at 666 5th Avenue in New York City one on the 1st & below-street levels, the other on the 39th floor, at the time the highest public restaurant in N.Y. They went there, by the millions. In July 1973, about 15 years after it opened, the restaurant announced that it was about to serve its 10 millionth meal. Ominously, a review that month found the cuisine anything but haute.

They continued to expand, building a frozen food processing plant in Solon, Ohio in 1968 and they ventured into specialty casual dining eateries with names like Rusty Scupper, Cheese Cellar and the Grog Shop. In 1969 NASA chose Stouffer’s products for Apollo 11, 12 and 14 for astronauts to dine on.

But it was the Stouffer’s “Top of the…” restaurants that became the special occasion places to go. “Top of The Hub” in Boston, “Top of the Rock” in downtown Chicago, “Top of the Sixes” in New York City, “Top of the Flame” in Detroit and “Top of the Town” in Cleveland.

The view was terrific from 40 stories up, especially in those days long before the World Trade Center, when a restaurant on top of a skyscraper was a novelty. Prices were reasonable. Children liked the view, and so did young couples on dates. Men proposed to their wives there,” it was a time when going to ”the city” meant journeying from Queens to Manhattan. You didn’t necessarily go there for the food, it was that wonderful atmosphere. 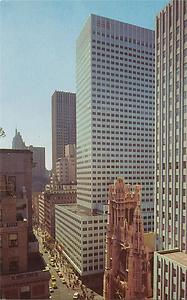 On September 18, 1996, The New York Times announced the closing of this beloved rooftop gem. The new tenant would be the Grand Havana Room, a cigar temple that will bear as much resemblance to a smoke-filled parlor as, say, the Oak Room at the Plaza Hotel. Right now I’d give anything for a mid-west cooked Stouffer’s meal atop of the Six’s. The best I can do, is to go to my rooftop, spread a tablecloth and open my microwaved Stouffers dinner – it’s just not the same.

What are your memories of “Top of the Six’s”?