Photo of the day: “YOU GOTTA HAVE FREUNDE/FRIENDS”

Photo of the day: “YOU GOTTA HAVE FREUNDE/FRIENDS” – Meet 40 more of my new friends from all over Germany! This was “group #2” that I took  all over town for the Christmas holidaze.
Isn’t funny how in every tour group there are always certain types: the ones who HAVE to sit up front in the bus “or I’ll get sick”, the permanently befuddled, your instant best friend, the camera buff, the person who constantly sez “I saw this when I was here last time”, the note taker, the spendthrift, the shopaholic and of course – the know it all. I will not reveal who is who . . . but they’re all there, and I love ’em all.
FRÖHLICHE WEIHNACHTEN !

Photo of the day: MEET 35 OF MY NEW FRIENDS FROM ALL OVER GERMANY 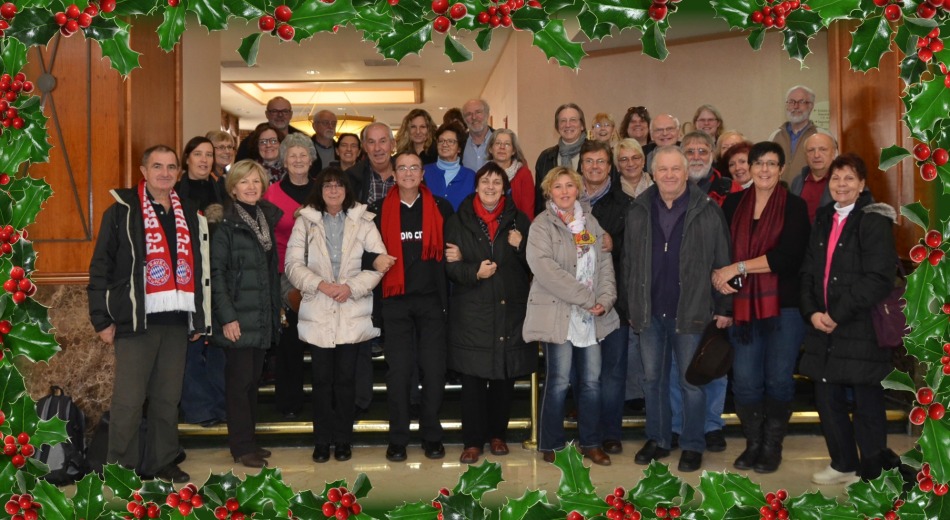 Photo of the day: MEET 35 OF MY NEW FRIENDS FROM ALL OVER GERMANY – I spent 5 days showing them New York through my eyes. From picking them up at the airport and showing them Manhattan for the first time as we drove down Fifth Avenue, to my full up and downtown tours including, of course, a visit to the Empire State Building. Their last full day is spent shopping. I chose either uptown Macy*s or downtown SOHO. I felt like Santa – so many had their special requests: “Where can I find a wooden train?” “I need Levis jeans.” “Where is the Harley Davidson store?” “Does Tiffany carry charm bracelets?” Hansanta answered all thier wishes.
I went with the SOHO group and those who weren’t so eager to shop got a walking tour with me of the Brooklyn Bridge, the stock market on Wall Street, the Trade Center and St. Paul’s Church. Topped off by a subway ride back to SOHO. German’s on their first New Yawk subway ride is a hoot – like little kiddies in an amusement park!
Here we are on our last day, all big smiles on our way to the airport. The next group is just 4 days away….
FRÖHLICHE WEIHNACHTEN !

Photo of the day: REASSURING THE SHORE AT CONEY ISLAND 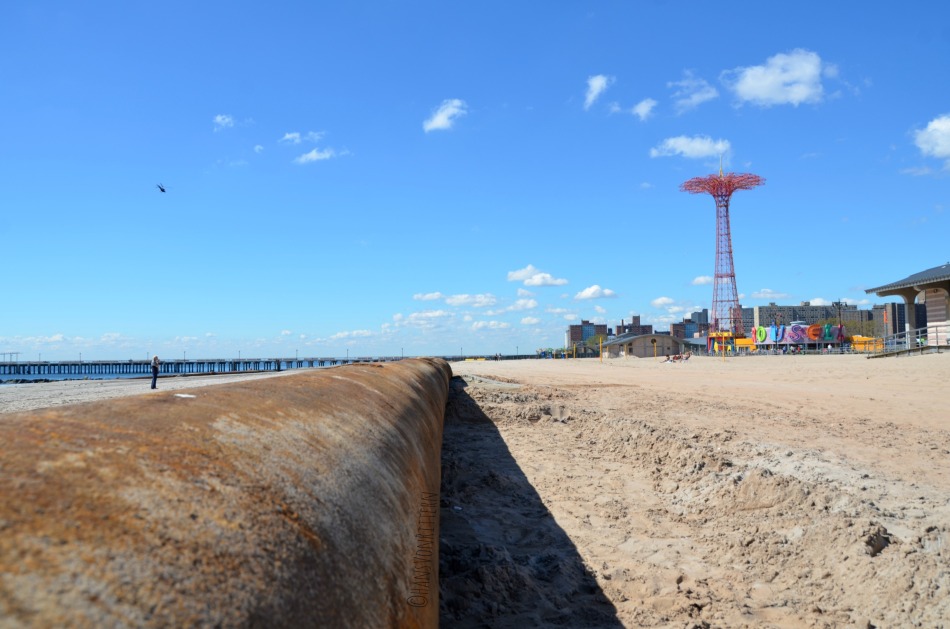 Photo of the day: REASSURING THE SHORE – I am taking my German tourist guests on my 5 hour long tour of Brooklyn today, via Harlem Spirituals Tours. From the Fulton Ferry landing at the Brooklyn Bridge allllllll the way to Coney Island for a Nathan’s hot dog lunch – wunderbar! Our last and final stop will be the 5 Pointz Graffiti museum as a surprise ending 🙂
At Coney Island for the past few weeks we have been met by this long pipe snaking along the beach. Early in September the $7.2 million Army Corps of Engineer’s project to pump 600,000 cubic yards of sand along Coney Island’s shore began. Although the beach closed for the summer after Labor Day and red flags indicated no lifeguards were on duty, there were a few sunbathers and swimmers adjacent to the area where the work is getting underway.
While restoration work is going on, there were rolling closures of roughly 1,000 foot wide sections of the beach where construction work is active, according to the Army Corps of Engineers (ACE). The beach nourishment project extends from West 37th Street to Brighton Beach, and is expected to be completed in the fall.
Coney Island was hit hard by Super-storm Sandy and soon, its beaches will be well on their way to being protected against future flooding. There’s a ship out on the horizon pumping the sand from the ocean’s floor (and surprising a few startled crabs I bet) and pumping it methodically onto the beach where it is sifted and raked. You can hear the rumbling of the stones and shells as they go whizzing by inside the large rusty pipes lining the beach. Soon we will be enjoying pristine sand to stick our toes into! Join us?!
Harlem Spirituals: http://www.harlemspirituals.com/