Photo of the day: EARTHLY REMAINS – THE LAST RECORD STANDING AT COLONY RECORDS 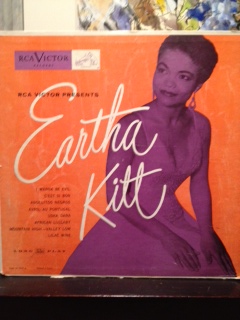 EARTHLY REMAINS – THE LAST RECORD STANDING AT COLONY RECORDS: My 100th post.
A story of eerie coincidence. Colony records was an iconic sheet music and record store on Broadway which sadly closed after 64 years a few weeks ago. Repeat patrons included Benny Goodman, Elvis Presley, Mick Jagger, Elton John, Liza Minnelli, Eartha Kitt and Michael Jackson, who in his later years took to scheduling after-hours appointments to drop by.
In my Sept. 28 blog “The Music Man’s Last Verse” I told the story of meeting Richard Turk the owner as I was trying to photograph the moving out and demolition of the store. We shared our memories of the store and (it turns out) our mutual love for singer and actress Eartha Kitt. “I was obsessed with her song C’est Si Bon, and of course fantasized about her as the Cat Woman on the Batman TV show.” Richard fondly recounted. His fantasy came true when one night, “Eartha Kitt came in, the store simply exploded!!! An absolute dynamite personality!”
I myself became obsessed with her when I saw her sing “I Want to be Evil” on the Ed Sullivan show in the early 1960’s. In the era of blonde Doris Day virgins, here was this black woman that wanted to be evil, I thought it was divine! I sought out all her records and amassed quite a collection with the help of Colony Records. In 1978 my dream came true when I met her March 1, 1978 at the Mark Hellinger theater when she starred in all the all black version of ‘Kismet’, a new show called “Timbuktu”. She made her entrance on top of a pyramid of black muscle men, one of them being a former Mr. Universe. She slithered down the pyramid and strode to the front of the stage, curled her bare toes over the edge, rose her arms and purred “I’m here!” It usually took many minutes for the wild enthusiastic applause to die down. I was in heaven. I crashed the opening party and was invited into her dressing room and she herself then invited me to Sardi’s opening party and we became friends after that, dancing nights away at Studio 54 and then exchanging letters while she toured with the show.

Fast forward to Wednesday, September 26, 2012 and Richard and his son  were shooting some video memories in the Colony, everything was cleaned out and they were in the basement when his son showed Richard one solitary record left on a shelf. “This is 100% the truth…” Richard said,  “This LP was the only item left in the empty Colony”
RCA 1953 Viktor 10″ LPM 3062  “RCA Viktor Presents Eartha Kitt” containing both songs “C’est Si Bon” and “I Want to be Evil”.  As Richard put it, “Erie shit…stranger than fiction eh!!”
The Earthly remains of Colony Records…Richard has kept the record for his private collection.