Photo of the day: “COME TO THE JEFFREY LEDER GALLERY MY FRIEND!”

Photo of the day: “COME TO THE JEFFREY LEDER GALLERY MY FRIEND!” – So, life is disappointing? Forget it! We have no troubles here at the Jeffrey Leder Gallery! Here life is beautiful…
The paintings are beautiful…even the photographs are beautiful (and selling) !
My dear friends Tom Orzo, Mindy Cassle-Rosato, of course Mom, Deborah Blau and Frederica Meister all came for the grand opening party of the 5 Pointz “Whitewash” exhibit that I am a part of! Why don’t you join the ranks of graffiti lovers, street art lovers, preservationists and the passionate and check out my 16 photos along with the fantastic works of artists Auks, Cortes, Jerms, Just One, Meres, Orestes, Shiro, See TF, Topaz, Zimad, Hunt Rodriguez proving art is forever! A mourning and celebration of the destruction of the world’s most spectacular street art museum. $20 catalog available for sale in the gift shop.
Come see the exhibit till June 8 at the Jeffrey Leder Gallery: 2137 45th Road, 1/2 block away from the #7 & G Court Street subway station. Two blocks away from 5 Pointz and MOMA’s PS1. Open 12 noon – 6pm.
http://www.jeffreyledergallery.com/whitewash.php
Willkommen, bienvenue, welcome!
Fremde, etranger, stranger.
Gluklich zu sehen, je suis enchante,
Happy to see you, bleibe, reste, spray paint!
TAGS:

Photo of the day: “IT’S A VON RITTERN!” – A very proud Ursula Von Rittern, aka “mom” points to the six photos exhibited in the “PHO-TO-GRAFFS” exhibit that opened this weekend at the Gold Coast Gallery! Great news: I sold some pieces and I am featured in the gallery’s store too!!

Mom checks out ‘the Von Ritterns’ for sale

I’d like to extend my deepest thanks to Marie Flageul and Meres One without whom 5 Pointz would not have been what it is and to their treasured friendship. To Jude Amsel, gallery director of the Gold Coast Arts Center for her kind guidance. To two of my dearest friends who came out to support me, tour guide alums Deborah Blau and especially to Tom Orzo who took the time to drive a very proud and delighted Ursula Von Rittern (not bad for 88 years old, huh?) to her son’s gallery premier. I am a very lucky man.

Tuesday November 19, 2013 is a day I will not long forget. It was a twist of events and cruel fate that brought many powers of good and evil together.

My dear friend and fellow tour guide Tom Orzo and I picked up 6 German tourist guests at the Queen Mary 2 at the Brooklyn piers for a 3 hour city tour. Normally Tom and I end our tour with a surprise visit to 5Pointz. Since we were coming from Brooklyn, Tom (doing the driving) insisted we make 5Pointz our first fateful stop. At 10:45 we were heading down Jackson Avenue when Tom kept calling out “Oh my God! Oh my God! Oh my God!”. I thought it was his over-reaction to a smaller building in front of the Graffiti Museum that was being torn down. My back was to the museum, I’m facing my German guests telling them how extraordinary a site they are about to see. Now I realize their faces seemed odd and puzzled, so I turn around to the shock of seeing men on high cranes slopping white paint all over the building, obliterating 12 years of spectacular intricate art. I quickly got out to see if I recognized anyone.

I ran back to the van and we sped to the main loading dock/entrance to the building. And there it was, a vandalized, obliterated work of art – 12+ years destroyed. I ripped open the door to the van and ran into the arms of curator Marie Flaguel and held her as tightly as I could. I cried deep from the gut. I couldn’t stop, I could not speak, I kept gasping for air. I was afraid to let go for fear of seeing Marie’s face. Finally I had to. “It’s all gone…” she said as tears streamed  down her face. The owner Jerry Wolkoff, the same man who had asked the artists to paint the murals on his building, had hired non union thugs to destroy over 1,500 pieces of art outside and even throughout the entire inside of the building. Murals that would take your breath away now had erratic white brush strokes all over them. Oddly enough, the greater more powerful murals – had extra coats of white paint over them, it was deliberate, fearful, vindictive and hateful. How do you find words in a moment when you realize it was one of the greatest mass desecrations of art in the 21st Century. An art genocide.

As Marie was filling me in on what happened, one of my German guests, Andrea Pröscholdt-Krulich, ran over in tears. “Why?! Warum?!” she kept asking. She was quite shaken. You see – her son was a graffiti artist who had recently committed suicide. She had planned on this trip to New York to visit 5Pointz to pay homage to her son. She never thought that a ‘routine Manhattan city tour’ would have included our surprise visit here. Andrea and my guests were stunned at the amount of press around us and the unexplainable goings on. They looked on in wonderment – here they were in ‘free’ America’, in ‘progressive’ New York and they were watching Hitler-like tactics unfold before their stunned eyes. Some of my older guests were survivors of World War II. I had to get back on the coach and explain what was happening. Then  I realized something. I was with a group of Germans, some of whom had been through a time in Germany when Hitler from 1936 to 1937 rounded up all “modern” art – “Entartete Kunst“ and declared it ‘degenerate’ and had it all destroyed. Over 5,000 works were seized, including 1,052 by Emil Nolde, 759 by Heckel, 639 by Ernst Ludwig Kirchner and 508 by Max Beckman, as well as smaller numbers of works by such artists as Alexander Archipenko, Chagall, James Ensor, Matisse, Picasso and even Van Gogh. What Jerry Wolkoff did was no different! 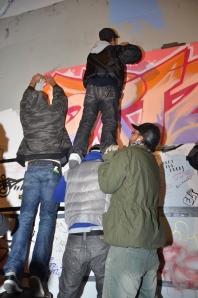 But we were not there to mourn the destruction of the museum, their clock was ticking and I was there paid to give a tour. We continued with our tour, but every time we came to a red light or got stuck in traffic, the conversation always went back to the disbelief of 5Pointz. We dropped off our guests and I headed to a candle light vigil that was held at 5pm.

GERMANY MOURNS WITH YOU ❤

The vigil’s atmosphere was like a tomb, what had been vibrant was dead. At night the ‘white” was even more ‘deadly’ and eerie. People kept coming, looking up in silent tearful disbelief and anger. Poster boards were taped onto the building for us to leave our messages. The purpose of the posters is – we will never ever again grace his walls with a single piece of art, line, scribble name or even a dot. Wolkoff had the audacity to claim he too cried. He claimed he had done this so the artist wouldn’t have had the pain of seeing their art work torn down over a period of months.  This scumbag reasoning is because he was afraid of the momentum we were gaining. On last Sunday’s rally, when 5Pointz was packed, Marie and Meres (co-curators) had gathered over 1,000 signed petitions in ONE day, to have the building land marked and saved. The owner Wolkoff cleverly erased the value of the building. Let us also not forget, the approval of the two twin glass towers that he plans to build on the same spot were approved by the weasel of a lying two-faced councilman Jimmy Van Bramer, the lowest form of politician there is: big smiling child like innocent face, with his hand holding a knife behind his back, ready to strike for his financial gain.  Wolkoff and Bramer – greed is the intoxicant but karma is the bitch.

So joining the ranks now of Picasso, Matisse and Van Gogh are artists Onur Dinc, Esteban Del Valle, Meres One, Spidertag, Kidlew, Kkade, Rubin, Aka Shiro, Veronique Barrilot, Contort, Jekl and Dyzer5, Bisco, Bishop203, Just One, Leias, Zeso, and Zimad, Lord Roc, Bisc1, one of my favorites Carlos “See TF” Game and so, so many, many more. Who is anyone to say they aren’t the next Keith Harring, Basquiat, or Matisse? It is a knife in the soul of a fading New York. 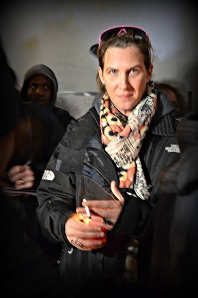