The first star I see tonight,

Have the wish I wish tonight.

The UNICEF Snowflake has been a New York City tradition since 1984. It is a gigantic crystal ornament that resides on the intersection of 57th St & 5th Avenue. Everybody at one point in their lives has thought of stars in sort of a dream sense. However, when you are approaching the Snowflake from either direction you would swear that you are on another planet traveling right next to a star, only you are in NYC. This Snowflake is 23 feet in diameter, 28 feet high and approximately 3,300 pounds. Perfect location for such a star like image, the intersection where it hangs is right smack in the center of some of the finest shops, restaurants and theatres in the world. From Tiffany’s to Bergdorf Goodman, from Henri Bendel’s to Nobu 57 and Carnegie Hall just around the corner on 57th and 6th Avenue. People from all over the world take photos of the Snowflake. It’s not only the magnificent structure consisting of 16000 illuminated crystal prisms but a symbol for hope.
More than a symbol, the UNICEF Snowflake is the centerpiece of an ambitious campaign to raise millions of dollars in support of health, immunization, nutrition, clean water and sanitation, education and protection for children in developing nations. It’s a reminder for UNICEF’s dedication to reach a point in time when zero children die of preventable causes. The Snowflake was dedicated to UNICEF by the Stonbely Family Foundation in 2002. Last year, acclaimed lighting designer Ingo Maurer and the French-based luxury goods company Baccarat unveiled this new UNICEF Crystal Snowflake, the world’s largest outdoor crystal chandelier of its kind.
(This is my 200th post! Thank you all!)

From the gallery: A TOUCH OF TIFFANY

A TOUCH OF TIFFANY: This black Venus graced the main entrance of Tiffany for Fashion’s Night Out 2011.
Her features sublime and the elegance of a gazelle. Decked out in Tiffany from head to toe. A glance of warm elegance graces the camera lens. Venus ascends.
http://fashionsnightout.com/

From the gallery: LYPSINKA TAKES MANHATTAN 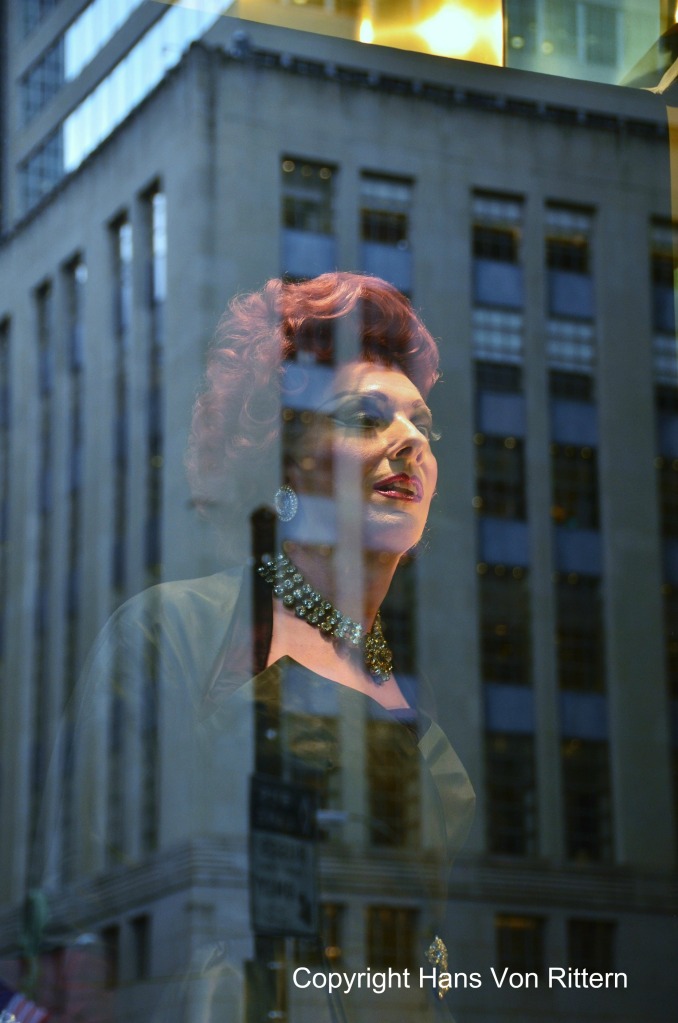 LYPSINKA TAKES MANHATTAN: In preparation for 2011’s Fashion’s Night Out Event, lip synch artist extrodinaire Lypsinka poses in Bergdorf Goodman’s windows on Fifth Avenue for her fashion shoot to accentuate the glamour of the event. Appropriately Tiffany, where Lypsinka has just spent the afternoon shopping, is reflected in the glass.
This year’s event is on Thursday, September 6.
http://www.youtube.com/watch?v=3swbPeDosm4
http://fashionsnightout.com/fno/nyc