Photo of the day: ROCKEFELLER CENTER-ED

Photo of the day: ROCK CENTERED – Following the incredible public response to Ugo Rondinone’s Human Nature public art display at Rockefeller Center, the exhibition has been extended by one month and will remain on view through July 7! Transforming Rockefeller Center Plaza between 49th and 50th Streets, Rondinone’s nine colossal stone figures stand like ancient sentries in the heart of Midtown Manhattan. Their immovable legs are gates through which visitors pass (and where they often pose for photos!) and their primal 16- to 20-foot-tall forms stand in stark contrast to the modern buildings that surround them. Some say they look like human figures…I say they look like stacked rocks – art is in the eye of the beholder. (And no, you can’t climb to ‘the top of the rock’).
Share your images of the exhibition using the hashtag #UgoNYC or upload your images to PublicArtFund.org, where they will live as part of their exhibition archive!
This exhibition is presented by Nespresso and organized by Public Art Fund and Tishman Speyer.

Photo of the day: psssssst…THE MARTIANS ARE HERE!

pssssst…THE MARTIANS ARE HERE!…: …and they’re watching you, ever so closely, all the time. Where you go, when you go there and with whom. They know your routine, your taste in clothes. One coffee – two sugars in the mornings, Monday’s it’s sushi for lunch, Friday’s it’s Mexican. They’re watching, hidden in plain sight on West 49th Street in Manhattan.
???? Look up – up there! Many stories above you head, there they are, just like the Martians in the 1958 Bugs Bunny cartoon “Hare-way to the Stars”. They’re curiously looking and watching.
What are they? New York City street lights, an odd kind unique to West 49th Street between Sixth and Seventh Avenues, opposite Rockefeller Center . These lights have ‘antenna’ atop their ‘heads’. I have studied them closely as they have me, and haven’t quite figured out what those ‘antennae’ are for. They’re not fiber optic lights for affect. I conclude they are either cameras or some sort of air measuring devices. If not…they’re a very 1960’s Calder-esque whimsical unique design, that none of us…have ever noticed before. They’re heeeere.

Photo of the day: A TREE IS COMING TO ROCKEFELLER CENTER! 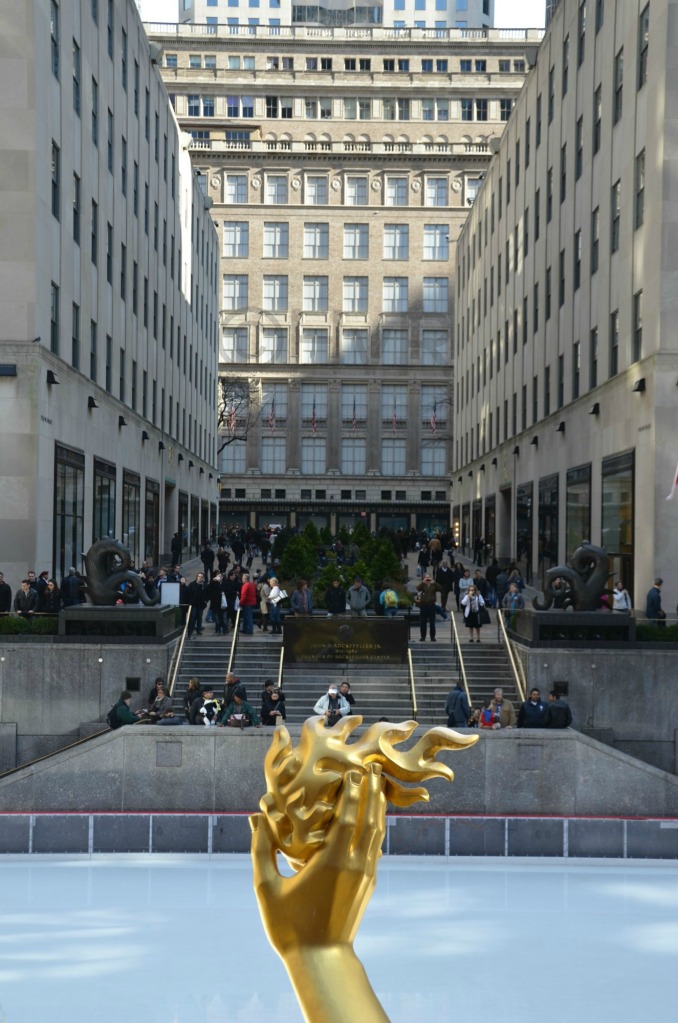 A CHRISTMAS TREE IS COMING!: Today Rockefeller Center will erect the annual New York City Christmas tree. Not your ordinary tree. This Norway Blue Spruce is from our neighboring state New Jersey and weighs 10 tons. It will stand a 80 feet (24 meters) in height, 50 feet wide (15 meters).
If you have ever complained about putting up the lights on your tree – you have nothing to complain about. This tree will take 40,000 LED lights winding over 6 miles of wire! The world famous Swarovski company will supply the crystal star atop the tree. The official lighting ceremony draws thousands of people including a gaggle of celebrities and will take place Wednesday, November 28th. Tis the season . . .

From the gallery: LEGO ♥ NY

LEGO  ♥ NY: These perfect Lego souvenirs are available at one of the coolest Lego stores around, the Rockefeller Center Store in midtown Manhattan. Inside the store there is a replica of Rockefeller Center, the Empire State Building and various other New York City landmarks. Model kits of famous NYC buildings such as The Gugenheim, MOMA, The Empire State Building all range about $39.99 – – – these blocks, just $1.99 = perfect!
http://stores.lego.com/en-us/New%20York%20City/LandingPage.aspx