Mondays on Memory Lane: I DREAM OF JEANNIE, BARBARA EDEN 30 AND 40 YEARS LATER

Mondays on Memory Lane – I DREAM OF JEANNIE 30 and 40 YEARS LATER: I have met Barbara Eden 1-1/2 times in my lifetime. The first time was in the year 2000 while I was working in downtown Manhattan. I was on my lunch break and would usually have my lunch near City Hall Park. On Wednesday, February 16th at 12 noon I got to the park and I could see this huge, huge line of almost only men outside of the mega store J&R Music and Computer World at 15 Park Row just opposite City Hall. There was this unusual heightened buzz of excitement about them so naturally I had to go over to investigate. I thought it was probably a Playboy Bunny or pin-up girl or some hot girl rocker. The line snaked out of the store and down the block. It was three to four men deep. The closer they got to the entrance of the store, they would all stand on their tippy toes to see “her” inside. “It’s Jeannie! It’s really Jeannie! Man, she looks great!”
‘Jeannie who’ I wondered, what Jeannie in 2000 could cause such a stir of excitement? I went to the guard at the door and tried to claim I was just going to shop – but no dice “Gotta get in line, all the other men are dreamin’ of Jeannie too, bud.” That Jeannie?! I was filled with excitement and headed around the corner to the back of the line, with at least 100 – 150 men ahead of me. What was so extraordinary about this frenzy was . . . this was way before Barbara Eden was heavily promoting the old beloved TV series as she does now and signing replicas of the famous bottle. She was there to promote the now defunct Cygion Cyber Genie, a micro PBX cordless phone system.
Since it was a promotional tour, her time schedule was limited. You could hear the J&R personnel saying that they had not expected such an enormous turnout. So, by the time I got inside the door, only to see her far on the other end of the store, the announcement was made, “I’m sorry fellas, but Miss Eden would love to meet you all, but she has to go.” That started a big roar of boos but also wolf call whistles to let her know how ‘hot’ they thought she was. Now in retrospect, I think working for Cygion must have been part of the wake up call to Barbara Eden to realize how still very beloved and popular she was thirty years after the show’s end.
Fast forward to Friday, October 27, 2010, ten years later and I am about to have my “Dream” come true! I am attending the Chiller Theater Autograph Show in Parsippany, New Jersey, where TV, movie, sci-fi, and music stars come for you to meet them and get their autographs and photos for a price. Finally I was going to meet Jeannie. I got there early and the lines were very long. Patty Duke was there, John Astin of ‘Addams Family’, Linda Blair, Richard Roundtree of ‘Shaft’ fame, LeVar Burton of ‘Roots’, the entire surviving cast of ‘Jeannie’ and ‘Dallas’ including Larry Hagman and so, so many more. So you’d think with that many stars inside, the crowd would evenly be distributed inside, the way water seeks it’s own level. No. Most people raced to the Jeannie/Dallas room, the wait in the hot hotel hallway was about two hours. (Larry Hagman passed me in the hallway on the way to the bathroom, lol, surreal.) 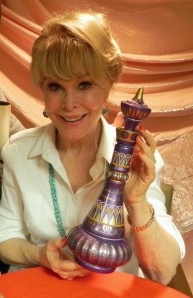 The wait was worth it. She was and is radiant. She beams love. There is an incredible gentility to her. She looked amazing! There was a man selling replicas of the bottle, which I had, had to have! I bought the bottle clenching it in my hand as I waited to meet Jeannie forty years later! How is it that I had aged and Jeannie hadn’t…yeah I know, she really is a genie! The moment came, I was next in line! My heart pounded, my palms started to sweat, my knees a little shaky, this was so surreal…a few steps more…a few steps more and I was in the arms of Barbara Eden. I had died and gone to heaven!

In 2010 I had met an extraordinary amount of celebrities on my wish list, including my obsession Cher (whom I had met before), but out of allll those stars, it was Jeannie that was the biggest thrill. To look at my nightstand today and see the signed bottle next to my bed is awesome, so I can truly ‘dream’ of Jeannie ♥.
http://15minutesmagazine.com/archives/issue_08/main.htm
http://www.examiner.com/article/some-tech-reincarnations
http://www.chillertheatre.com/main.htm