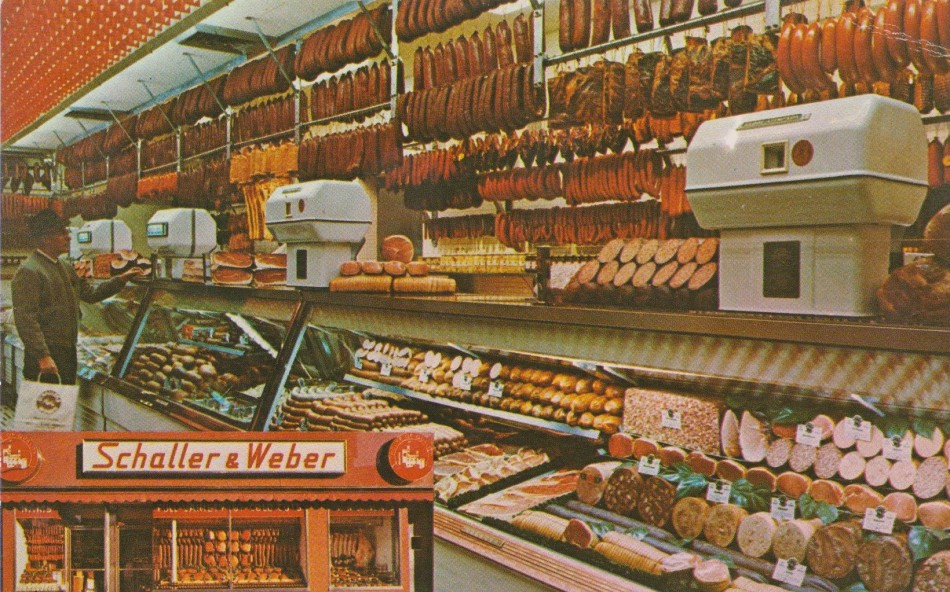 Mondays on Memory Lane: YORKVILLE’S SCHALLER & WEBER’S DELICATESSEN –  At the turn of the century from 1890 – 1910 one third on New York City spoke German, today hardly anyone does and instead you hear Spanish, Russian and Chinese.  I was born in 1955 and as a child we would go to the German section of the city named Yorkville. Yorkville’s center street was East 86th Street and it’s surrounding streets. In this area you could still here strains of “wunderbar” and ooom-pah-pah ♫♪ all around you. You could buy everything from back home: Mecki books, Salamander shoes, Zarah Leander and Heino records, teewurst, Loden coats, Tyrolian hats, beer steins, wooden nut crackers, Lübeck Marzipan, German magazines and newspapers and all the wiener schnitzel and beer you wanted.
That was then, today there are only 2 establishments left that I know of. The Heidelberg Restaurant (1648 Second Avenue) where today the little dark haired Guatemalan waiters wearing (much too big) lederhosen  tell you the day’s specials in a heavy Spanish accent. But…there is one staple that has remained – Schaller and Weber, opened in 1937 at 1654 Second Avenue/86th Street, a German delicatessen where the white haired old German butchers with German accents still politely slice the fresh deli meats daily.
When I was a little boy, this place was heaven to me and still is. You can just lock me up behind the deli counter and leave me in there for a week. Ahhh! The smoked hams, the dozens of salamis, the stuffed peppers, stuffed veal, weiß wurst, Westphalian ham and my obsession – roladen! Roladen are very thin slices of beef, rolled up with spices, bacon and onion inside, pan fried with a rich dark gravy, add boiled potatoes and you’re set. Then there are also the wonderful chocolates, sauces, white asparagus, smoked fish, hearty breads, Bahlsen cookies, Maggi and Knorr spices and a fine assortment of cheeses.
In 2013, for a person born in to an all German family, Schaller and Weber is that one place I can still retreat to and relive my childhood, inhale deeply and feel at home. The store, (thank god) has hardly changed. They are struggling to hang on throughout the great disruption of the second avenue subway being built. There were rumors of them not being able to afford to stay open, but when I reach the corner of 2nd Avenue and 86th Street – they are still there – a sight for sore eyes. I go inside and it is Christmas/Weihnachten 1962 and I’m standing in line with my numbered ticket to be called as I am fixating on all the goodies I hope my mother will buy for the Christmas holidays, always topped off with the treat of a Lübecker marzipan bar. Some kids dreamed of being locked up in toys stores and candy shops – I dreamed of being locked up in Schaller and Weber!
Here is a partial list of their goodies and a link to their web site:
http://www.schallerweber.com/find-buy/original-store/ 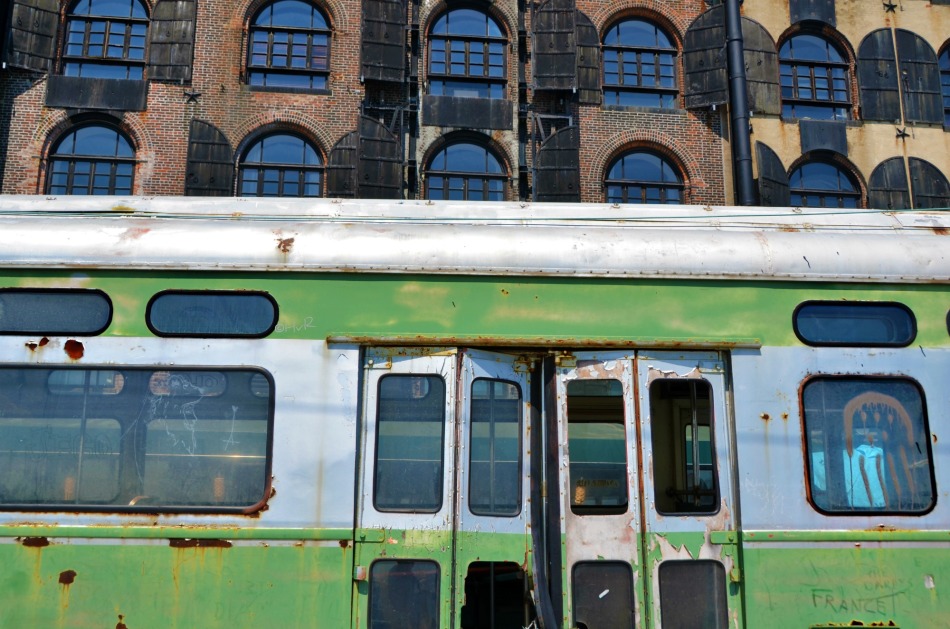 Photo of the day: HERE’S TO THE LADIES WHO LUNCH 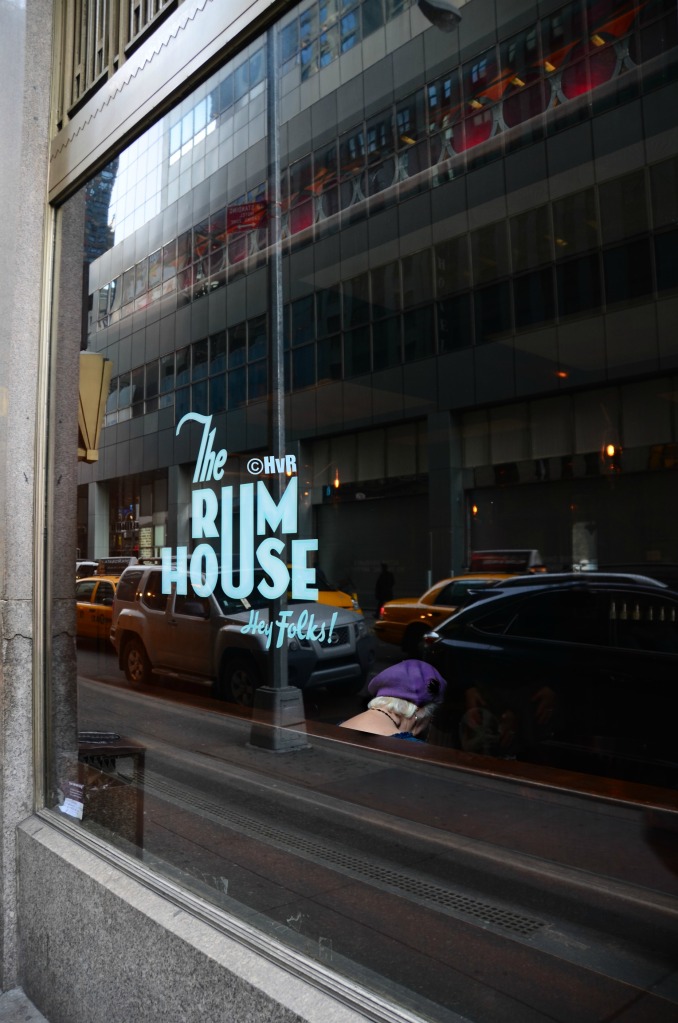 THE RUM HOUSE: It’s been a long day. The train was late, Bergdorf’s was too crowded and the help was slow, the dress was no longer on sale, the family never called – perhaps it was yesterday’s argument over tea. Getting a cab was impossible. Must keep an eye on the watch, the cat at home will want dinner soon. Maybe there’s interesting mail today – maybe not.  Maybe brunch with the girls tomorrow – maybe not. Here’s to the ladies who lunch. Does anyone still wear a hat? I’ll drink to that. 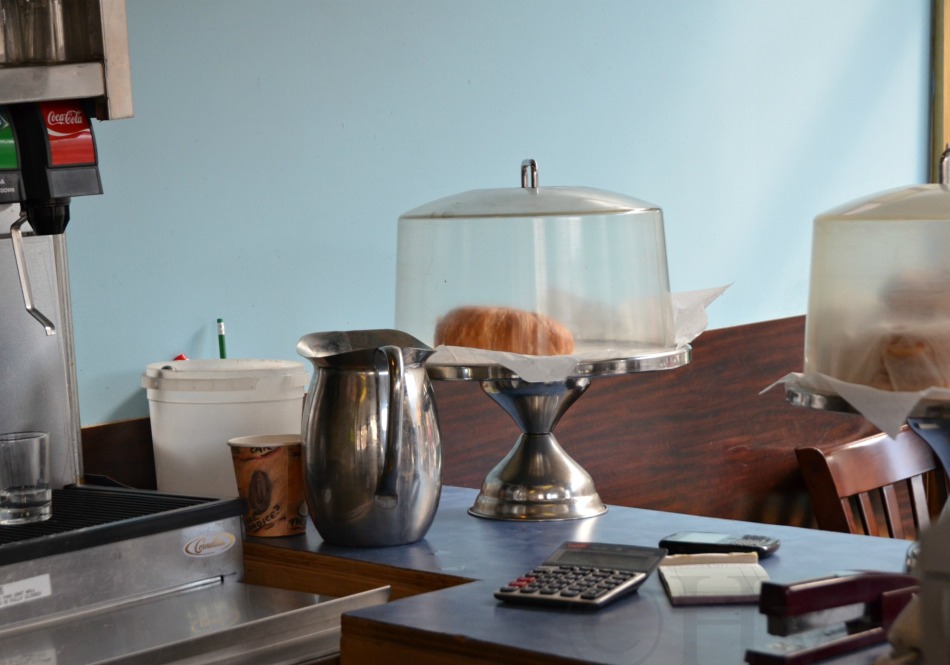 COFFEE SHOP STILL LIFE: Americana is the classic local coffee shop with the Coke machine, the cake tray bearing the last croissant, the classic pewter coffee shop water pitcher, the calculator to add the take-out order’s total. This little corner of Americana is the New Post Coffee Shop on Queens Blvd and 40th Street. It is comfort. Having stood still in time since the 1960’s, it is reassuring that the hectic pace of change can go away, just for that time you spend here. The classic ketchup bottle on the counter, those wonderful thick white coffee mugs, the cake trays with the plastic domes, the sizzle of the gridle, vinyl covered counter stools that twirl, laminate counters with plastic menus offering a wide variety of comfort food to make that awful boss, that annoying subway ride or that really bad day just go away.
http://www.newpostcoffee.com/