Photo of the day: MORNING REQUIREMENTS: STALE TOAST AND TWO PEANUTS – This is Oscar my ‘pet’ squirrel who comes by every morning to have his breakfast served by me. Every morning he has 2 unsalted peanuts and 1 pecan waiting for him on my third floor windowsill, but nothing gets him going more than a good old fashioned piece of stale toast! (But no coffee, it’ gets him too wired.)

Photo of the day: FEED ME! DINNERTIME FOR OSCAR 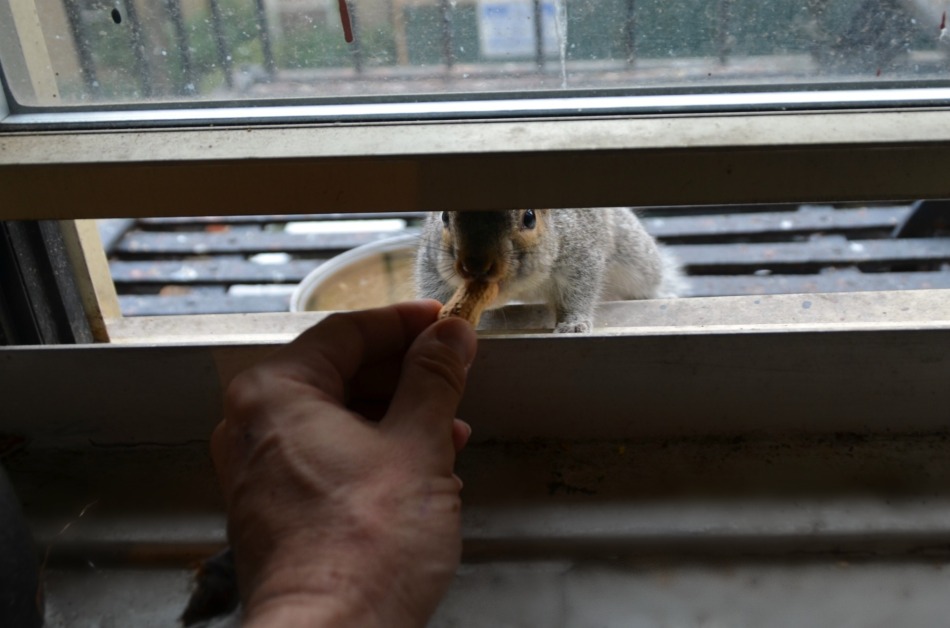 DINNERTIME FOR OSCAR!: This is ‘Oscar’ my (sort of) pet squirrel. He is named Oscar because he showed up on my 3rd floor windowsill about 5 years ago on the night of The Academy Awards. I have been leaving him a peanut on the windowsill every morning for breakfast ever since then. There is also a water dish (I have blogged about before) on the fire escape for him to drink from.
At sunset yesterday I heard a scratching at my window. Oscar was still hungry. I opened the window just a bit and his whiskery nose poked in and busily sniffed about. ‘There must be peanuts around here somewhere! I know he’s got ’em!’
Well, after four peanuts Oscar was finally well satisfied. He did take a fifth peanut and ‘hid’ it in the  fire escape stairs for tomorrow morning.
A funny Oscar anecdote: One summer I had forgotten I had left the window open and I am sitting in my office and all of a sudden hear some crunching.  I come into the living room and there was Oscar sitting on a nearby bookcase with a pile of peanut shells all around him. It was the funniest sight! Of course it went so lightning quick I didn’t have a chance to grab my camera then, but today I did. Hmmm, maybe tomorrow it’ll be walnuts