Photo of the day: MOURNING THE LOSS OF GAY PRIDE’S GRAY’S PAPAYA 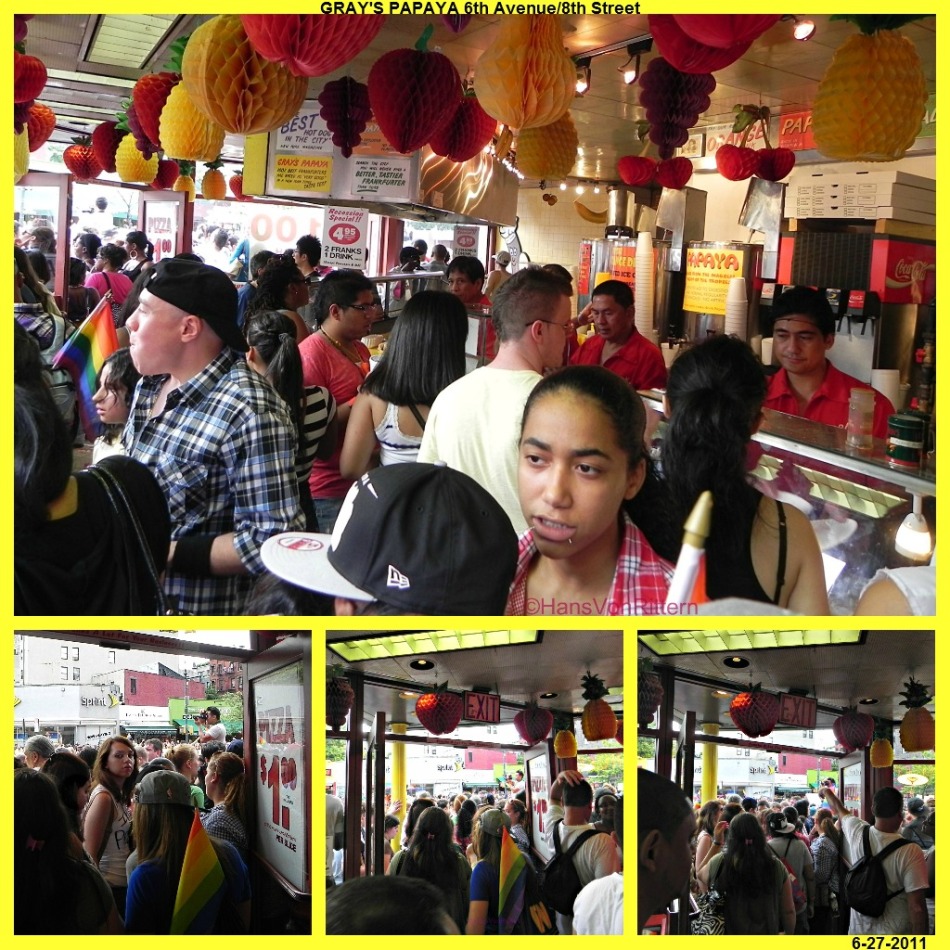 Photo of the day: MOURNING THE GAY PRIDE DAY’S GRAY’S PAPAYA ~ What on earth will Gay Pride be without the wonderfully bright yellow Gray’s Papaya on the corner of 6th Avenue and 8th Street, the epicenter of the Gay Pride day parade?!?!

For anyone that has ever followed the maddening crowd of the parade on the sidewalk as a spectacular spectator, knows the tightest bottleneck of the parade is when you come to the main intersection of 8th/6th. It is where the large Fifth Avenue sized fabulous parade has been squeezed onto narrow 8th Street and now pours onto the big 6th Avenue intersection again leading it to the ceremonial entrance to gay history’s Christopher Street. The police have therefore cordoned off any chance of you crossing the street within blocks of this big intersection. It does give the parade marchers the space to twirl and show-off before shashaying onto Christopher Street – it’s a divine madhouse! But the one chance you had to make it around the corner as a spectator was to cut through Gray’s Papaya’s open walk-through corner, and by the thousands we did.

It was a quick mini party stop for you to grab that desperately needed cold juice and those wonderfully tasty hot dogs and $1.00 slices of pizza, it was party on the go! The (sadly now) iconic paper fold out fruit decorations hanging from the ceiling made it feel like you were stopping by a madhouse Carmen Miranda fruit stand! With the perfect flow through traffic pattern open corner set-up, it was the absolute ideal guaranteed chance at grabbing that badly needed drink and some nourishment as you tried to make it further along the parade route. That super staff never missed a Latin beat, those dogs and slices were dished out as fast as we ordered them, those Papayans were one of the true martyrs of the parade! I always admired how they kept there cool while others were like “ay caramba!”. Nicholas Gray, the proprietor could not afford to have his monthly rent increased outrageously from $30,000 to $50,000 a month, therefore he was forced to close.

Yes there is Nathan’s in Coney Island and it has wonderful history, but most New Yawkers are not willing to pack a suitcase to travel to the outer reaches of Brooklyn for a dawg. So, Gay Pride and the largest Halloween Parade in the world and especially late night party goers all are going to miss you terribly, a very strategically placed Gray’s Papaya. Adios mis amigos, adios 😦 . . . 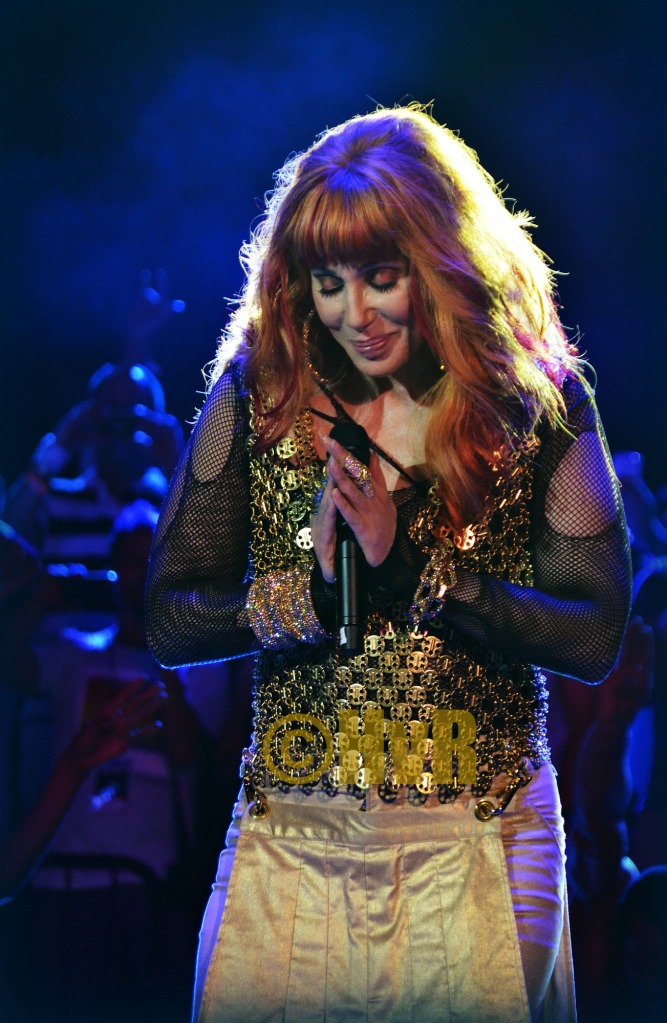 Photo of the day: SOME PEOPLE MARCH TO A DIFFERENT DRUMMER 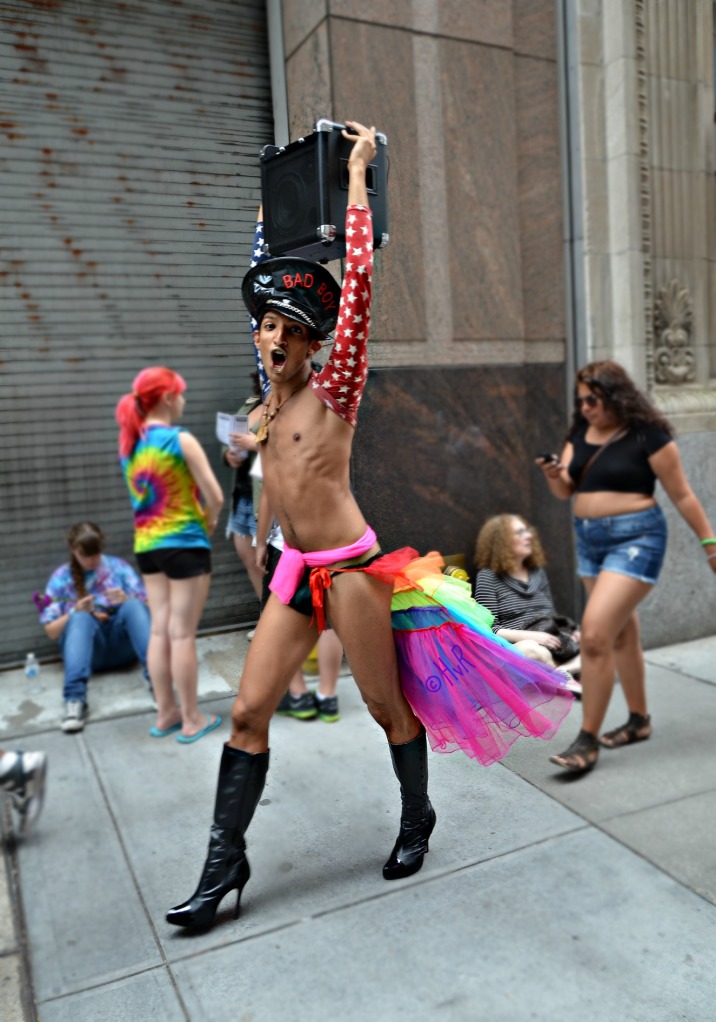 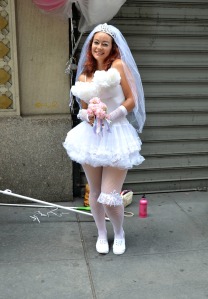 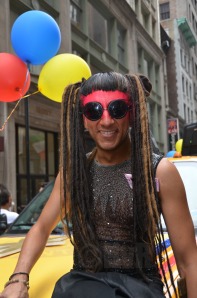 SOME PEOPLE WITH FRECKLES MARCH 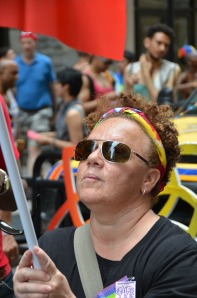 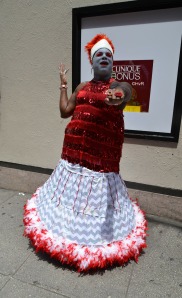 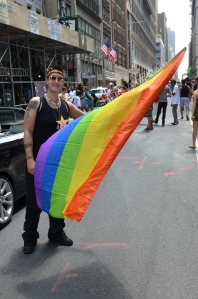 AND SOME FASHIONABLY FIERCE PEOPLE MARCH! 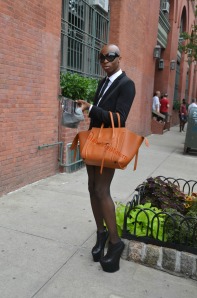 …WHATEVER THE BEAT OF YOUR DRUM IS – MARCH ! 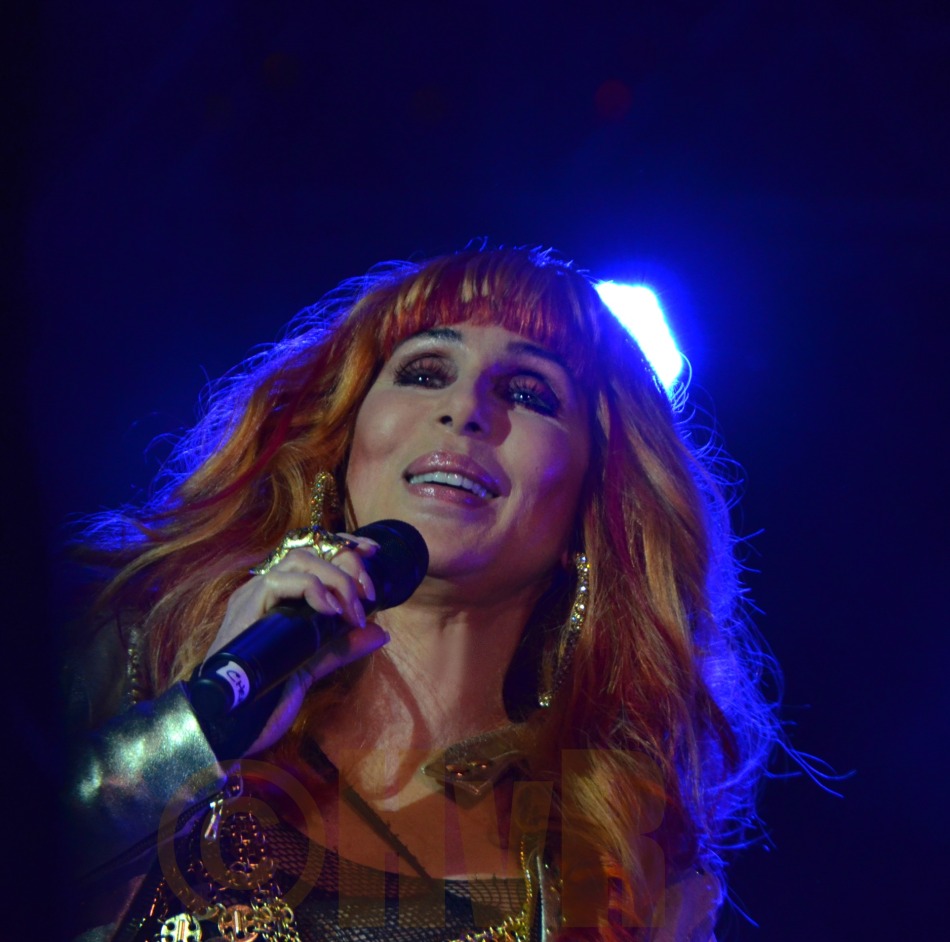 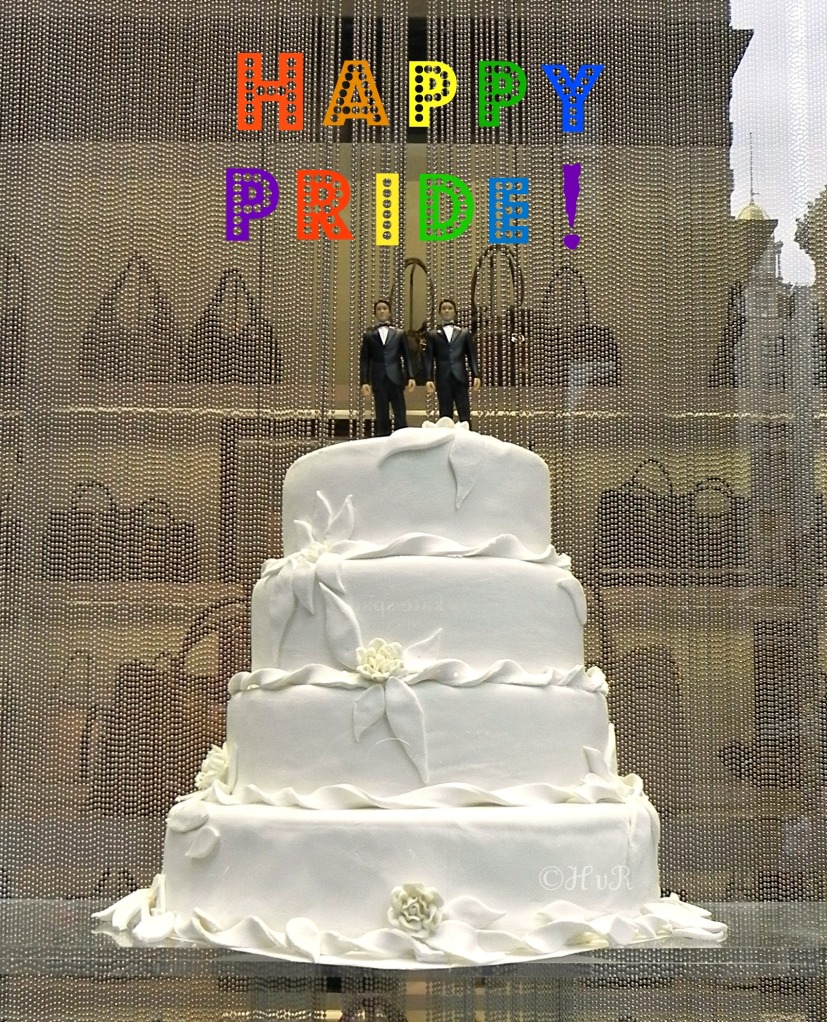 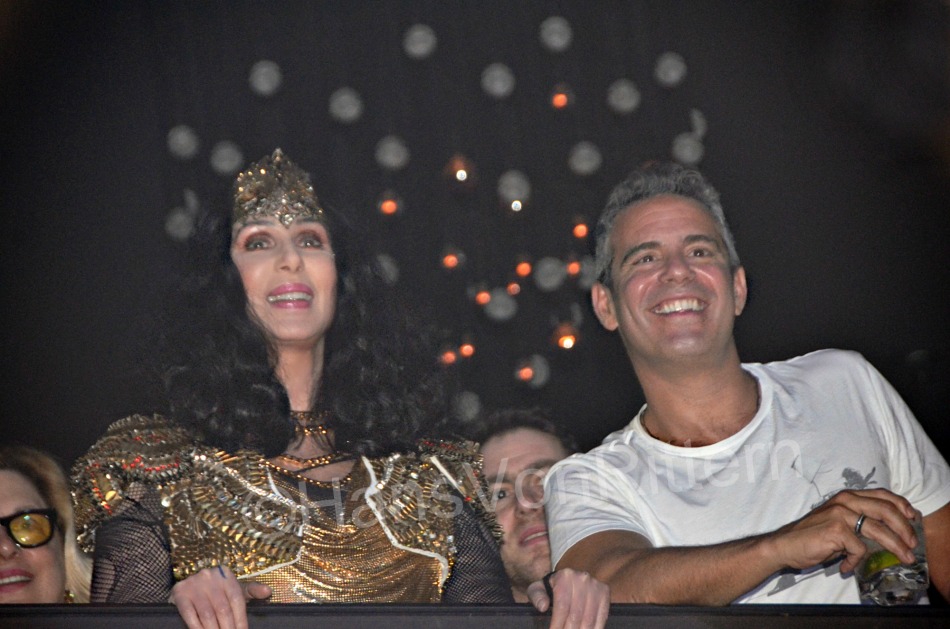 Photo of the day: MY NIGHT WITH ANDY COHEN AND . . . CHER ! – Last  night, at 2:30 in the morning the vision of Cher ascending the staircase amongst the club goers at Club Marquee was not a dream, it was a dream, some would say come true. The goddess herself after spending the evening with Andy Cohen’s “Watch What Happens Live” show on Bravo, joined Andy in attending a ‘Cher Fashion Show’ while her music was blasting.
Dressed in an Egyptian/street warrior type outfit, she and Andy watched with delight as she sang along to some of her songs. It was surreal to have Cher just a few feet away holding court over “her boys” and the Cher drag queens for Pride Week. Andy Cohen was charged with energy as he couldn’t stop grinning with sheer delight at spending the evening with Cher. Neither could we!
After the show she came down the stairs right through the club goers, onto the floor and joined the DJ on stage and spoke from the heart: “I have a lot of very special fans, but you guys are extra special. From the bottom of my heart, I mean this, I have had ups and downs in my career and you guys have never left me! You will keep me in sequins forever.”
Here’s a video montage of the evening:
https://www.youtube.com/watch?feature=player_embedded&v=gwKpNNeA0ac#at=199

Photo of the day: TIME AND LOVE CONQUERS DOMA AND PROP 8 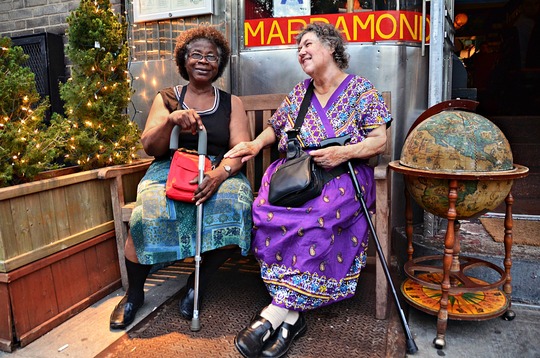 Mondays on Memory Lane: THE PALLADIUM DISCO 1986 “EVERY DAY IS GAY PRIDE DAY” 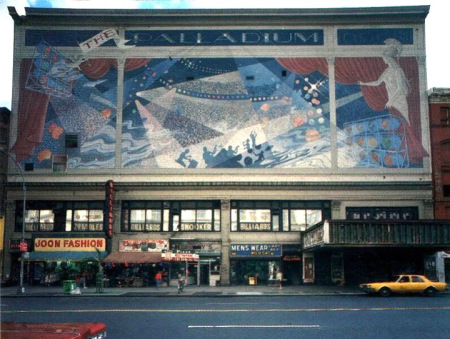 Mondays on Memory Lane: THE PALLADIUM DISCO “EVERY DAY IS GAY PRIDE DAY” – June is world wide Gay Pride month. One of the last great dance palaces of the disco era was the grand Palladium which every Sunday catered to an almost all gay audience. Owned and operated by the former Studio 54 masterminds Ian Shrager and Steve Rubell. It was one of the last clubs I attended around 1986 before “it just wasn’t fun anymore.”

The Palladium was converted from a movie theater to a music venue and then into a nightclub. The famous duo hired  Danceteria DJ Richard Sweret, who saw the possibility of a much larger audience for a downtown New Wave, Euro and house music-oriented club. From its celebrity-studded opening in May 1985, through the end of the 1980’s, it was one of the major features on a vibrant New York club scene. The club was a mainstay on the New York club scene until it was bought out in 1997 by the voracious appetite of New York University (NYU) and demolished for a sterile campus housing project. They have continued to destroy New York ever since.

Junior Vasquez’s Arena party, held Saturday nights and all day Sundays at Palladium between September 1996 and September 1997, was one of the most popular parties in the New York club scene at the time. Although the promoters billed Arena as “The Gay Man’s Pleasure Dome”, the party drew an eclectic mix of gay and straight from Manhattan and far beyond. 14th Street in those days was still seedy and therefore the attraction to gain entrance into the club as you bypassed the bums in the adjoining urine stenched doorways was ‘chic’ and daring. 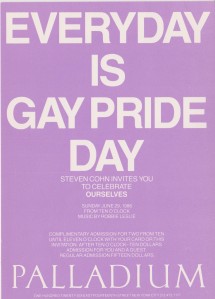 The Palladium represented architect Arata Isozaki’s transformation of a vacant and rundown theater, originally built in 1927 as the Academy of Music, into an extraordinary interior that can only be described as a sleek new structure, the equivalent of a seven-story building using more than 200 tons of steel, within the restored grandeur of the original shell. After the conversion from a venue to a club, the main dance floor of the Palladium was a huge space which used to hold the theater and seating. One interesting feature of the club was the large banks of TV monitors in grid formations that were used to display music vidoes. Each monitor could operate separately, or one large picture could be shown across the grid – we had never seen such technology before and it was mesmerizing to us at the time. 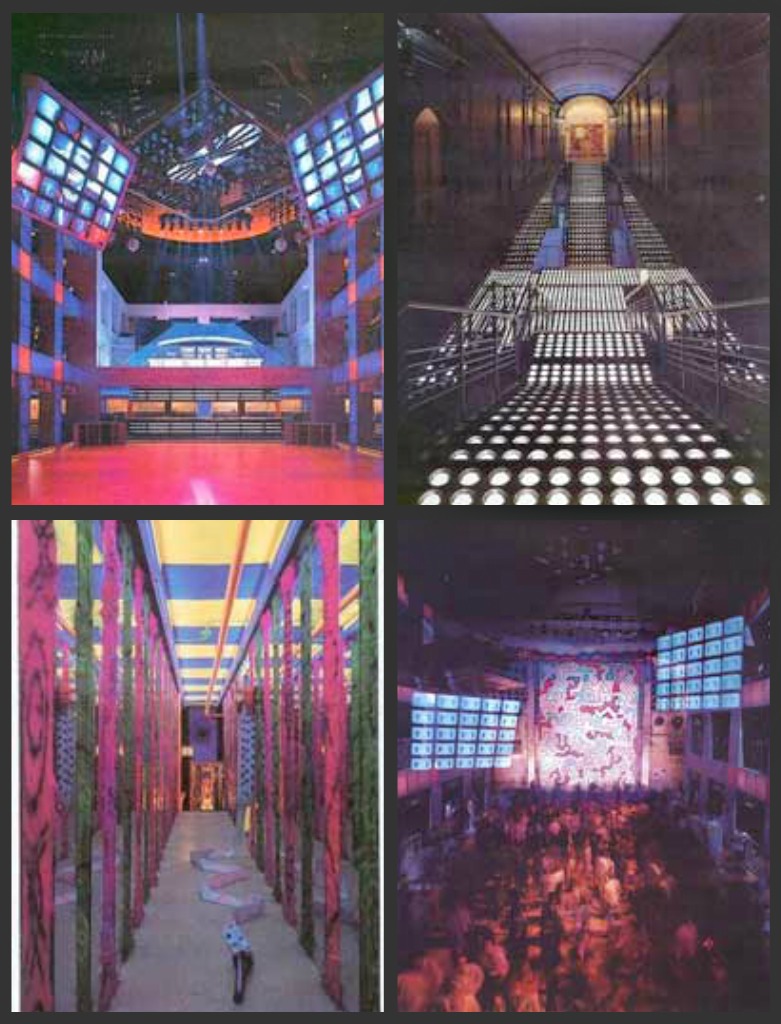 The entire gigantic cavernous club was big enough to hold different areas, the equivalent of three or four clubs! Besides the pounding main dance floor area there was a multicolored basement, and the famous upstairs “VIP room”, The Michael Todd Room. Murals were created for this space by the well known New York artists of the 1980s Jean-Michel Basquit, Francesco Clemente, Kenny Scharf and Keith Haring – these treasures are gone.

The video links below will show you the 1980’s grandeur it once was.

A rare visual tour into the past of The Palladium: http://www.youtube.com/watch?v=t5_NI2MSmp8

MTV music video A. Snap – The Power B. Technotronic – This beat is Technotronic: http://www.youtube.com/watch?v=vUdbX4B-74s