Photo of the day: HAPPY HALLOWEEN FROM BABY DIVINE! – If ever there was a fierce drag queen, it was Divine! Born Harris Glen Milstead, star of cult films like “Pink Flamingos”, “Mondo Trasho”, “Female Trouble”, “Lust in the Dust”, “Multiple Maniacs”, “Polyester” and all time classic “Hairspray”. She has been copied ever since and will never be topped or duplicated. . . until now.

I saw this Halloween tribute to her in the window of Two Boots Pizza in Greenwich Village. Tonight’s New York Greenwich Village Halloween parade is the largest in the world – our ‘carnival’. Filled with political satire, sex, gore, sex, humor, sex, and over the top creativity! Over 3 million participants and viewers and broadcast internationally. Only in New York !

Mondays on Memory Lane: 1981 ONE NIGHT ONLY AT THE RITZ WITH HOLLY WOODLAWN 2013

Mondays on Memory Lane: 1981-2103 ONE NIGHT ONLY AT THE RITZ WITH HOLLY WOODLAWN – Thirty three years ago I saw advertised in the local underground magazines that Andy Warhol’s outrageous transgender star Holly Woodlawn was to appear in Terrence McNally’s play ‘The Ritz” co-starring then infamous gay porn star Cal Culver better known as Casey Donovan. The show was at Xenon Disco, the strong competition to Studio 54 at the time. Xenon (as Studio 54 was) was also inside an old Broadway theater with huge pinball bumpers that came down from the ceiling that you had to bump with your hip so that alarm bells would go off, part of the current ‘the bump’ dance craze.
‘The Ritz’ was based on Bette Midler’s 1971 unusual meteoric rise to fame in the gay bathhouse ‘The Continental Baths’ owned by Steve Ostrow in the Ansonia Hotel. The Broadway play garnered Rita Moreno (as third rate Puerto Rican actress wannabe ‘Googie Gomez’) a Tony award and her role was reprised in the hilarious 1976 film.
The fact that Holly Woodlawn, herself Puerto Rican, certainly not ‘third rate’ but campy as hell, was performing in this play had me immediately buy tickets for the first night of previews (I couldn’t wait for opening night!). The show was a perfect fit for Holly and she was hilarious. After the show we danced the night away, in the early morning hours, on my way out of the disco I tore this poster off the wall – unbeknownst to me at the time, the show opened and closed that same night due to lack of funding.
For those of you too young to know who Holly is, but the name still sounds familiar, singer Lou Reed refers to Holly Woodlawn in his iconic song “Walk on the Wild Side,” in the opening lyric “Holly came from Miami, Florida.” Her antics and connections to a now much revered Andy Warhol past are legendary. I seem to be the only one who remembers that when iconic 1960’s/70’s music club Trude Heller’s at 418 6th Avenue (SE corner of 9th Street and 6th Avenue) started placing hand prints of the famous performers on their sidewalk, Holly placed her ass prints in the side walk. The block was framed and hung on the side of the club.
AIDS and changing tastes wiped out this entire glorious and glamorous era and the people and it’s clubs simply disappeared. But there is one of the few tough survivors – Holly Woodlawn. I was stunned and excited to receive a notice that she was going to make a super rare appearance at the Laurie Beecham Theater (Joan Rivers’ fav hangout) on Friday, May 17. I bought a ticket immediately and sat 2nd row. I brought with me my theater posters of Holly’s shows such as ‘The Neon Woman’, Women Behind Bars’ – both starring drag legend Divine. But my ultimate treasure is the one night only appearance of ‘The Ritz’. The posters caused quite a stir amongst her fans and old friends, taking pictures of them with their iPhones. Then 7:30 came, the lights were lowered and out she came, thirty three years after I had seen her – Holly.

She is the embodiment of a survivor! Now battling near crippling spinal stenosis, it was heartwarming yet hard to watch her cheerfully be helped on stage by two of her friends. “I am home!” she cried. Now 66, nothing else had changed, the sly wink, the double entendres, the off-the-wall humor, and above all, the immense amount of love streaming between her and her audience. She is sharp as a tact. Funny, irreverent, reflective and above all determined to have a good time. It was a mutual love fest. With no disrespect meant to either women but Holly has sort of morphed into long gone comedian Totie Fields. It was endearing. After the show she was helped from the stage in her wheel chair and her long time friends such as actress Brenda Bergman and fans surged towards her, some wanting autographs, some a photo and some just to recall one of the incredible Warhol days with her. She was able to sign only one autograph and she chose my ultra rare poster, “I can’t do it so well you know, Hans is your name? You know I am part German too,” she said with a determined smile. I was left speechless as I watched her struggle to lovingly sign my poster in hot pink ink. In that moment I was transported back to that first night of previews of “The Ritz”, I could hear “You’ll be swell, you’ll be great! Gonna have the whole world on a plate.” Holly Woodlawn does have the whole world on her plate – and I was lucky enough to be at her feast! 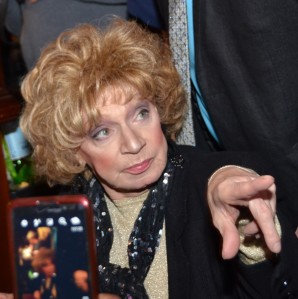 Read Holly Woodlawn’s autobiography “A Low Life In Heels”: http://www.amazon.com/The-Holly-Woodlawn-Story-Heels/dp/0312064292/ref=sr_1_1?ie=UTF8&qid=1369066058&sr=8-1&keywords=holly+woodlawn
“The Ritz” The farce is set in a gay bathhouse in Manhattan, where unsuspecting heterosexual Cleveland businessman Gaetano Proclo has taken refuge from his homicidal mobster brother-in-law, Carmine Vespucci. There Gaetano stumbles across an assortment of oddball characters, including a rabid chubby chaser, go-go boys, a squeaky-voiced detective and Googie Gomez, a third-rate Puerto Rican entertainer with visions of Broadway glory who mistakes him for a famous producer and whom he mistakes for a man in drag. Further complications arise when Gaetano’s wife Vivian tracks him down and jumps to all the wrong conclusions about his sexual preferences.
The Continental Baths’ amazing star studded history: http://en.wikipedia.org/wiki/Continental_Baths
Rock club Trude Heller’s: http://streetsyoucrossed.blogspot.com/2005/05/trude-trude-trude.html
Holly Woodlawn: http://en.wikipedia.org/wiki/Holly_Woodlawn 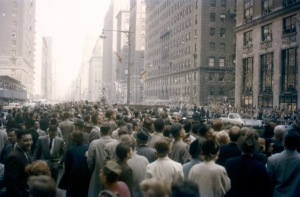