Posts tagged “1973 Reflections on my World” 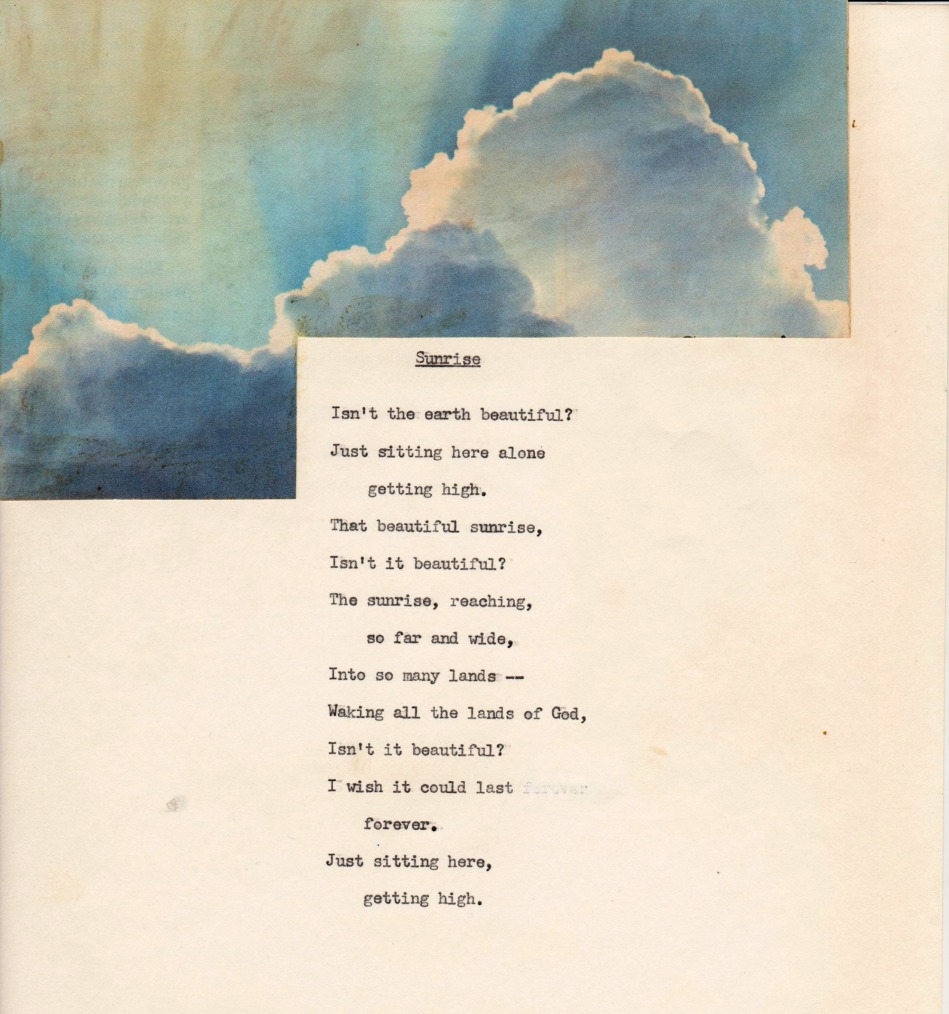 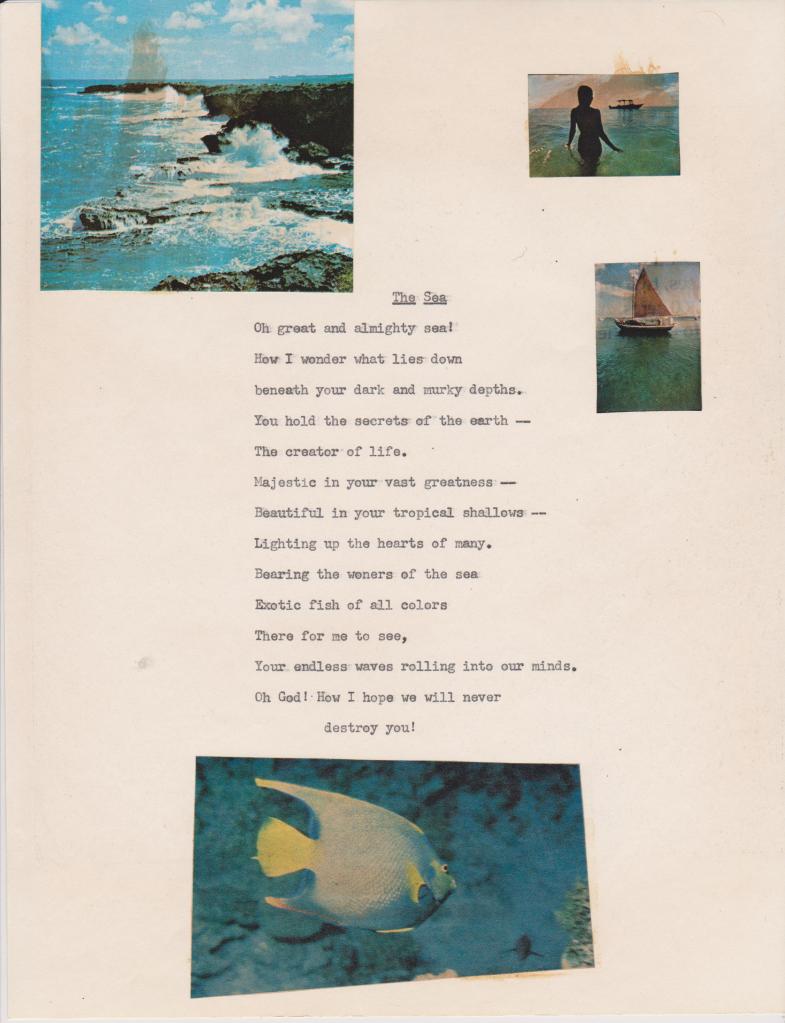 Photo of the day: THE SEA – Part of Mondays on Memory Lane, a few weeks ago I found my junior high school poetry project from 1973 (see last Monday’s post for the story) called “Reflections on My World”. There are twelve poems, here is the second “The Sea”.
THE SEA
Oh great and almighty sea!
How I wonder what lies down
beneath your dark and murky depths.
You hold the secrets of the earth –
the creator of life.
Majestic in your vast greatness –
beautiful in your shallows –
lighting up the hearts of many.
Bearing the wonders of the sea
exotic fish of all colors
there for me to see,
your endless waves rolling into our minds.
Oh God! How I hope we will never
destroy you!

Photo of the day: 1973 REFLECTIONS ON MY WORLD 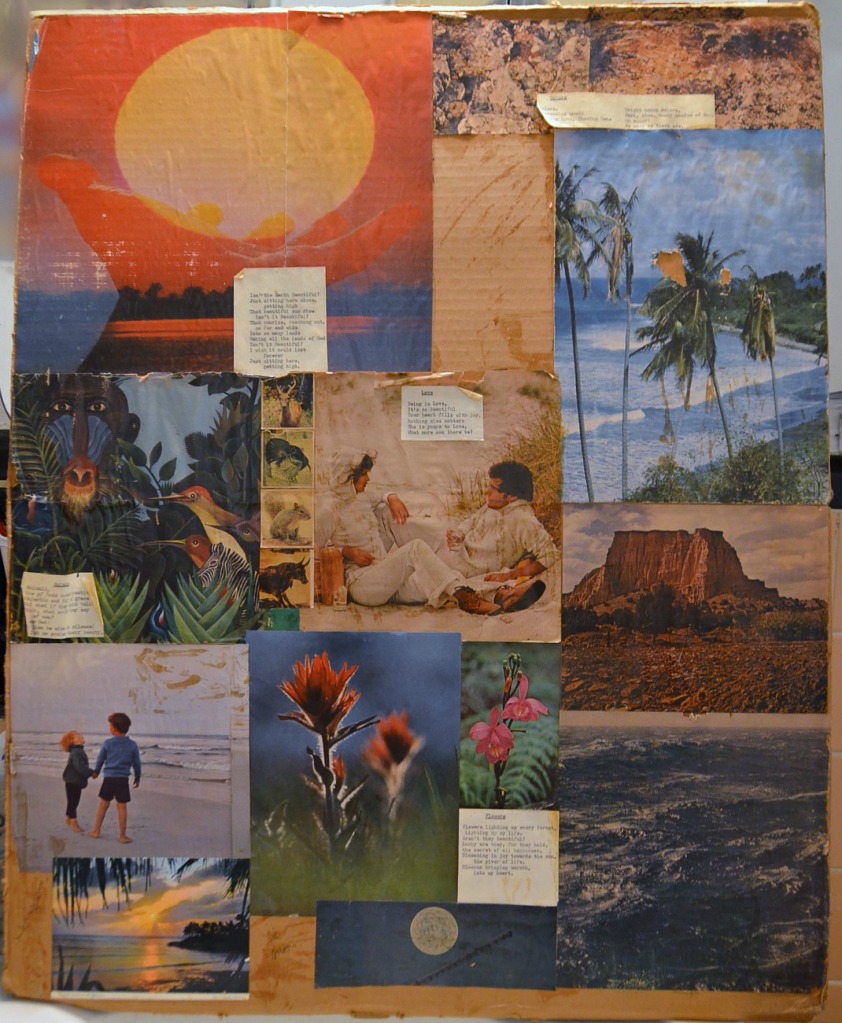 Photo of the day:  1973 REFLECTIONS ON MY WORLD – Returning back to Mondays on Memory Lane, I just found my junior high school ‘audio visual’ English project from 1973.

It was a collage of photos and poems accompanied by a typed booklet version as well. It was my first attempt at seriously writing and expressing myself at age seventeen. There are twelve poems: Sunsets, The Sea, Sun Rise, Animals, Love, Colors, Beaches, The Desert, Flowers, Horizons, The Moon and Children. I had always been a voracious hunter of magazines in our apartment building’s incinerator (aka garbage) room and would spend hours looking through magazines like Look, Life, Time, Good Housekeeping, Ladies Home Journal, National Geographic, the gossips mags, Newsweek, anything with pictures. So therefore, I think the twelve poems were decided upon by the photos I had clipped from the magazines. (Somewhere in my warehouse space there is still a treasure trove of boxes filled with magazine clippings.)

I received an A+ on the project from English teacher Mr. Palzer.  My audacity was, I had pasted a note on the back with an explanation of the project, as well as me having the balls to proclaim I deserved ‘at least’ an A if not an A+. In Mr. Palzer’s critique I was complimented on my self expression and insight. I had two grades, the first one was heavily crossed out by Mr. Palzer and next to it was the A+. With no other grade higher than an A+, I guess he at first wasn’t going to give in on my high opinion of my work – but then on second thought…he gave in J . Here after forty-one years, is the first of my twelve poems “Sunsets”.

The end of the day draws near,

remember how we laughed the day away,

our hearts filled with joy –

the sun lit up within us.

The sun shone so brightly through the trees,

swaying in the breeze,

birds floating in the air.

The sun now sets and the time has come to end this harmony,

as it slowly sets shining onto the peaceful sea,

glistening it’s last sparkle of light into our eyes.

spreading peacefully over the island,

ending the excitement of sunlit flowers as it sets.

into pale violets and yellows, 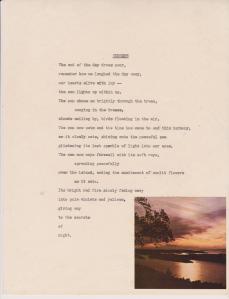 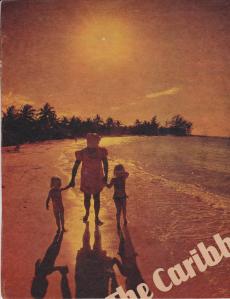