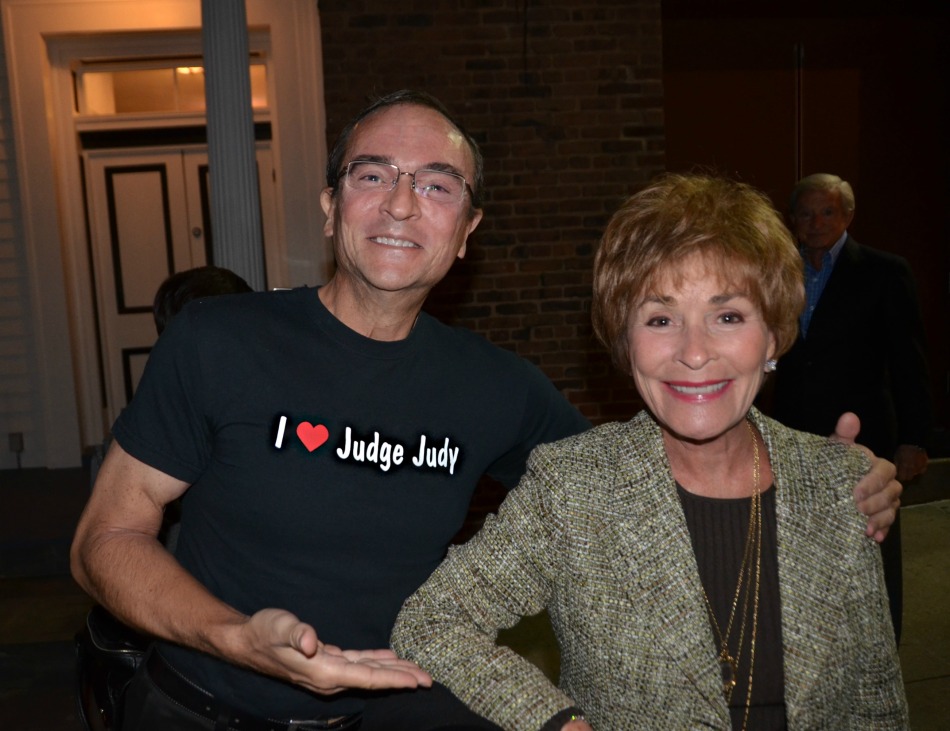 Photo of the day: HANS MEETS JUDGE JUDY ON 17 YEAR TV ANNIVERSARY ! ! ! !  – On the day after Judge Judy’s 17th year anniversary of having the longest running and highest rated court show in America, I had the glorious privilege of meeting her honor in person! I have admired her no nonsense moralistic, old values, harsh humorous stance on the law approach to our court system since September 16, 1996 – 17 years, no one can compare.
First and foremost – at 70 years old, she looks better in person than on TV! A soft complexion and looking radiant and youthful as ever, beaming warm smiles, filled with spunk, humor and above all gracious. I think that’s why she has such a loyal following, the ‘court Judy’ is not the ‘in person Judy’, she is an iron judge in a velvet shell.

Where else but NYC’s 92nd Street ‘Y’ can you see Linda Ronstadt and Judge Judy?!

Judge Judy was being interviewed by Katie Couric at the 92nd Street “Y” (YMCA). I arrived 2 hours early and waited by the stage door wearing my “I ♥ Judge Judy”
t-shirt. More than anything I desperately wanted my picture taken with her. At 7:30pm she arrived, wearing an elegant suit, husband Judge Jerry Sheindlin by her side. She immediately saw my shirt and said “Well, I have to go over there!” It was absolutely surreal to see her in person after having seen her on TV, sometimes 4 x’s a day, finally there she was…talking to ME. Another fan took the picture with my arms around Judy, finally the t-shirt and Judy were together after allll these years, my heart was pounding!! We took a few pictures and I asked if I may tell her something important to me, from my heart. She took my hand in hers, held it tightly and with the warmest smile she said “go ahead”. GULP! I said my rehearsed words: “You – are my drop of rain on the desert. There are times when I can’t even bear to watch the TV news anymore for the lack of sensible laws, the lack of logic and morals, the political infighting, it’s the same day after day. But then there’s you. . .the voice of reason, and then everything is bearable again, thank you for that!” She squeezed my hand tightly and I felt like I could fly!
Once inside the sold out event, the interview began and Katie had her prepared questions. The one thing Katie learned quickly, you ask Judge Judy 1 question and she will talk and digress on about 4  or 5 different subjects – the audience loved it. Katie just let Judy go. The judge had the audience in her hands as she spoke freely, of course uncensored and from the heart.
Photos and tape recording were strictly forbidden and enforced, so I took out my old fashioned pencil and paper and took reporter-like notes, I didn’t want to forget what she said, here are some memorable Judy-isms:
– She comes from Ocean Avenue between Avenues ‘S’ and ‘T’ in Brooklyn.
– Her style in the court room comes from Jewish borscht belt humor, she said “Brooklyn humor and attitude cannot be replaced.” That’s how she learned her timing. “Brooklyn timing separates you from ‘Brooklyn not’“.
– Born Judith Blum, her dream was to live and work in Manhattan.
– Her first job in the late 1960’s for L’Oréal cosmetics as a lawyer was the only time she was treated in a sexist manner. Two lawyers were hired to handle customer lawsuits, a man and she. He was given an office, she was given a desk and a pad and pencil and told to call the manufacturers to check up on orders. She said “that didn’t work for me! ‘You don’t put baby in a corner’!” (She actually said that!)
– What attracted her to her first husband? His highly polished shoes. Her second husband? His looks. “We still have a mojo.”
– Her makeup artist Nancy is invaluable to her because she sets the “up” mood for each day on the set.
– Officer Byrd and Judge Judy have worked together since she was on the bench in NYC and are best of friends.
– She now earns $47 million – a year ! She spoke about it at length. “CBS is making a lot of money off me. Furthermore, I can do the show on my own, they can’t do the show without me.” She donates a lot of her income.
– The show’s message: “Do the right thing and the rest happens, take responsibility for your actions.”
– Her take on today’s times in America: She feels things are not getting better, but instead worse, we as a people are just afraid to admit it.
– In 1982 Mayor Ed Koch gave her the first break by appointing her as a judge, first in criminal court, then later as Manhattan’s supervising family court judge in 1986. What did she learn? ‘First impressions are everything.’
– Her advice: follow what you are good at. You define yourself. A woman defines her own worth.
– From all the years on the bench the lesson learned: “Anger is a hard emotion to get rid of.”
At the end of the night, many fans ran to the stage door for an autograph. I thought ‘why not?!’, and waited about 90 minutes. Finally to our shock and surprise the security guard came out and said, ‘There are too many of you to sign autographs at this late hour, but, Judge Judy wants you all to come inside and she will take group pictures with you.” The fans squealed like little children on Christmas eve. Judge Judy was asking to see us! So there we were, late at night, inside the empty 92nd Street ‘Y’, Judge Judy directing ‘fan traffic’ as we got this rare treat of our moment with this generous, gracious spunky gal from Brooklyn – our very own Judge Judy. I can’t stop smiling 🙂

JUDY-ISMS: “Do I have ‘stupid’ written over my forehead?” “I’m here because I’m smart, not because I’m young and gorgeous, although I am,” “If you live to be 100, you will never be as smart as I am, sir,” “Clearly you are not wrapped too tight,” “Where did you think you were coming to today, a tea party?!” “I’m speaking!” “If you interrupt again madam, your case is dismissed, and I’m throwing you out. Do we understand each other?” “I’ve been in this business for over 40 years,” “Do I look like I need help from you?” “That’s a lot of who shot John” “This is my playpen!”
http://www.whatwouldjudysay.com/