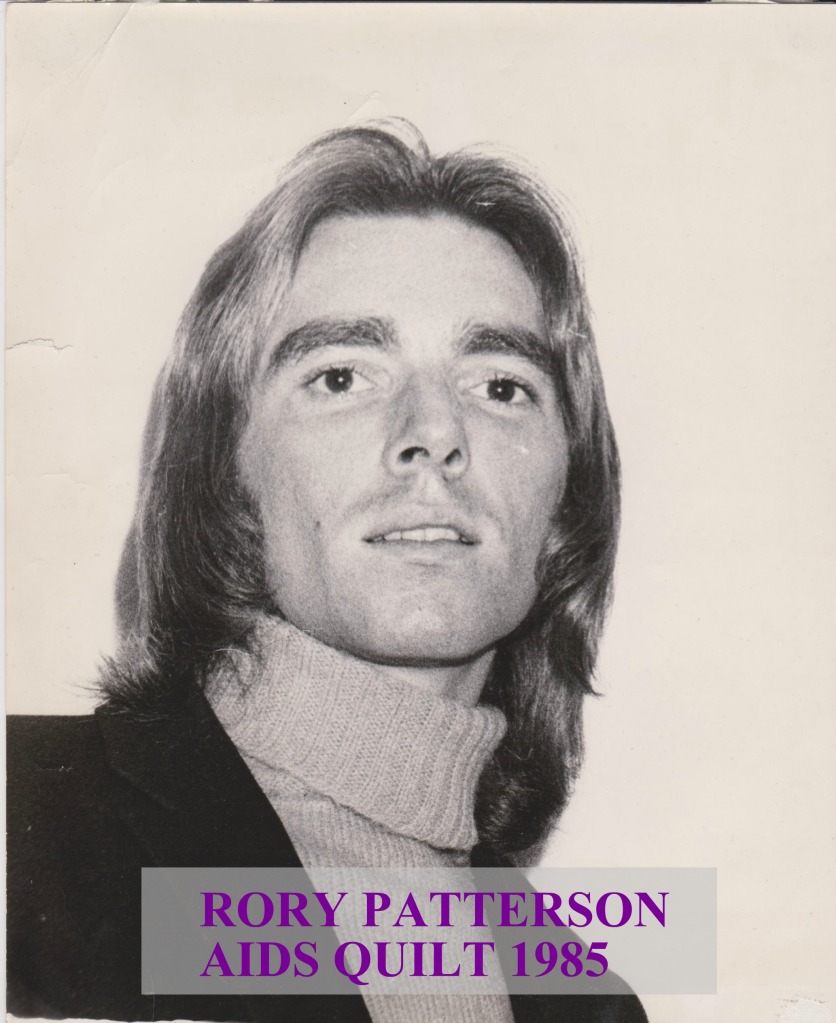 In the 1970’s and 1980’s I was what you call a “stage door Johnny.” I would haunt the stage doors of the theater district hoping to get an autograph of the greats of the time. Gloria Swanson, Ingrid Bergman, Richard Burton, Lauren Bacall, Anne Baxter, Eartha Kitt, Elizabeth Taylor, Ruby Keeler, Diana Rigg, Bette Davis, Joan Crawford, Claudette Colbert and dozens more, it was a glorious time.

When the performance was over, I’d go into the theater pretending to look for something (not) left behind and grab a Playbill and then rush to the stage door to get an autograph. I was in high school and early college days and couldn’t afford the tickets to all the shows I wanted to see. What I could afford after my rendezvous with Gloria Swanson or Ingrid Bergman – was a hamburger at a long gone theater restaurant called “Charlie’s“. It was located on West 45th street, right off Schubert Alley between Broadway and 8th Avenue.

One of the waiters there was Rory Patterson. He had a magnetic charm and would always wink and give me a free drink from the bar. (He happened to be legendary actor George C. Scott’s favorite waiter and George would standardly tip him a $50 dollar bill no mater what the check came to.) Over the years Rory and I  became friends. He was a cool guy to know because after the Broadway shows were over, many of the supporting casts would come to Charlie’s and sing around the baby grand piano. The walls were covered with framed posters of the shows, all of them autographed to the hilt, now worth a fortune. So Rory would invite me to stay at the bar  and we would sing show tunes with the cast of “Applause” or “Sugar Babies” (sometimes Ann Miller herself would be there), “Sweeney Todd” , “Hello Dolly” or Eartha Kitt’s “Timbuktu”. I was star struck at the magic goings on after hours  that many a theatergoer didn’t know about. There I was at one o’clock in the morning singing show tunes with Rory and Eartha Kitt!!

By 1978 I graduated college and life had to become a bit more serious and staying out all night till all hours weekdays wasn’t the smart thing to do, I had a job to go to. Rory continued on at Charlie’s and whenever mom and/or friends and I went to the theater, the natural stop afterwards was of course Charlie’s.

On Rory’s nights off he would appear in many of the local cabarets and night clubs, there were so, so many of them in those days. He was a talented singer and was developing a following, some of them famous. My family and I would have front row seats at many of his shows. He was finally ‘discovered’ for his great singing voice and good looks and was offered the lead role in a Broadway musical called (I think) “The Singer” (something like that…, but it never opened).

Rory was so terrified of the auditions he started to drink, heavily. So much so it became a detriment to his character and the part was taken away from him. He drowned what he felt was his failure and fears in booze and sex. Gay bath houses were in every part of town in those days and Rory would drink himself blind and wake up the next afternoon in one of the bathes. He’d show up late for his shift at work. His downward spiral caused him also to lose some of his friends. It wasn’t good to be seen with someone who slurred their words. “Wasn’t he supposed to star in that musical? What happened to him?” His mother couldn’t save him, his friends started to give up and slowly I must admit I drifted away too. As far as I knew Rory felt it was safer to just bar tend and wait tables than to face the terror of having to prove yourself to producers and backers and then audiences night after night.

Fast forward to September 26, 1985, it was opening night of Lily Tomlin’s brilliant one woman show “The Search for Signs of Intelligent Life in the Universe” and mom and I were thrilled to attend this genius of a new show. The show was a comedic masterpiece  and mom and I reminisced about Lily’s earlier days on ‘Rowan and Martin’s Laugh-In’, so… feeling nostalgic we thought we would celebrate the night by going to Charlie’s and surprise Rory and to catch up. We happily went to ’his section’ and waited to see his cheery smile. We were brought menus. Drinks were served and finally a waiter asked us for our order. “Oh no,” we said, “We’re waiting for Rory”. Our waiter rushed over to the bar, we assumed to get Rory. Dead silence fell over the staff. They all seemed to freeze in their spots and they all just looked at each other and no one would look us. It was that kind of awkward moment you see dramatized in a movie.  Our waiter returned, “I think may not have heard,” his look was so grave we knew it wasn’t that Rory had merely been fired. “Rory passed away.” He leaned over our table and whispered in the lowest whisper possible “It was AIDS.” The word was not said out loud in those days. Nothing else was said. We just pointed to the hamburger on the menu and fought back the tears because we had already drawn attention, it wasn’t easy. We ate in silence. As we left the manager came over and hugged us and said “We all loved Rory, George C. Scott is a little richer now.” It was an awkward joke but we know how he meant it. Mom and I walked home and were guessing what this new plague AIDS was about. We simply didn’t know, it hadn’t hit us yet. It was a night that changed us forever.

The next day I found my old address book and contacted his mother. After a long consoling conversation she ended the call by saying, “He’s on the quilt, you know.”

In those days the AIDS quilt was only in the beginning stages and not that large yet. I contacted a Broadway AIDS charity of the time and they offered me to come by their office to see a photo of his quilt.

One of the volunteers in this tiny office handed the photo to me, there was ‘Rory Patterson’ spelled out in little hand made cloth light bulbs and underneath, lots of Playbills. I smiled, Rory in a unique odd way, had finally gotten his name up in lights without the stage fright, safe and secure, finally not wrestling his demons, but resting in peace. 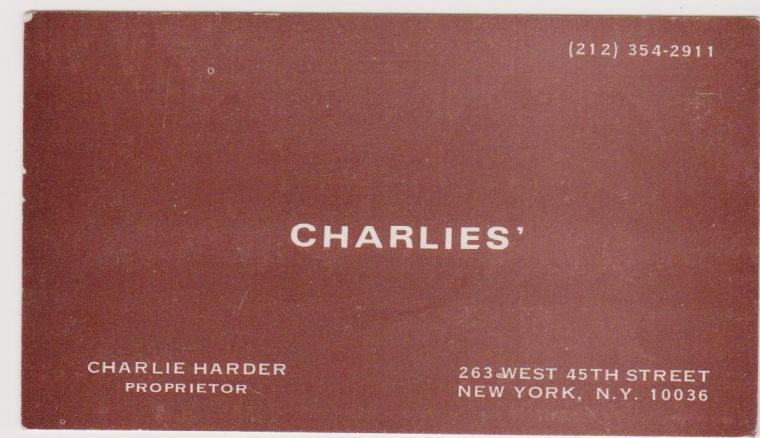 The idea for the NAMES Project Memorial Quilt was conceived in 1985 by AIDS activist Cleve Jones during the candlelight march, in remembrance of the 1978 assassinations of San Francisco Supervisor Harvey Milk and Mayor George Moscone. For the march, Jones had people write the names of loved ones that were lost to AIDS-related causes on signs that would be taped to the San Francisco Federal Building. All the signs taped to the building looked like an enormous patchwork quilt to Jones, and he was inspired. It officially started in 1987 in San Francisco by Jones, Mike Smith, and volunteers Joseph Durant, Jack Caster, Gert McMullin, Ron Cordova, Larkin Mayo and Gary Yuschalk. At that time many people who died of AIDS-related causes did not receive funerals, due to both the social stigma of AIDS felt by surviving family members and the outright refusal by many funeral homes and cemeteries to handle the deceased’s remains. Lacking a memorial service or grave site, The Quilt was often the only opportunity survivors had to remember and celebrate their loved ones’ lives. The first showing of the The Quilt was 1987 on the National Mall in Washington, DC. The Quilt was last displayed in full on the Mall in Washington, D.C., in 1996, but it will return in July 2012 to coincide with the start of the XIX International AIDS Conference, 2012.