ROOM AT THE INN

ROOM AT THE INN: The Music Inn World Instruments – 169 W 4th St (between Cornelia St & Jones St), Greenwich Village. 11:30 am.
As a tour guide in New York, I explain to my guests: “Villagers don’t do mornings.” Nothing opens up until 12 noon, but, everything stays open till 2:00 am.

“WHY DO THEY ALWAYS LOOK LIKE UNHAPPY RABBITS?”: Marilyn Monroe’s (as Miss Caswell) query to Addison DeWitt played by George Sanders when asked to go and meet the theatre producer Max Fabian played by Gregory Ratoff and “go do yourself some good”. She puts back her shoulders and puts on a big smile and goes to do herself ‘some good’ at Margo Channing’s (Bette Davis) ‘blasted party’ for Bill Sampson’s (Gary Merrill) birthday.
Photo taken during the Bryant Park and HBO Film Festival showing of “All About Eve”. Monday, August 13th, 2012. Bryant Park is behind the New York Public Library on Fifth Avenue and 42nd Street. 10,000 people showed up to see Marilyn, 50 years after her death. Marilyn lives eternal.

“FASTEN YOUR SEATBELTS, IT’S GOING TO BE A BUMPY NIGHT!”

“FASTEN YOUR SEATBELTS, IT’S GOING TO BE A BUMPY NIGHT!”:  ‘All About Eve’ is my obsessive favorite film of all time. I own film memorabilia from the film and had the extreme privilege to meet Celeste Holm in 2011 and even attended her 95th birthday party. I thought I had died and gone to heaven when she signed my original 1950 film poster for me.
Imagine my euphoria to  find out Bryant Park’s and HBO’s Film Festival was showing ‘All About Eve’,  Monday August 13th, 2012. I would have attended if I had the plague. Approximately 10,000 people showed up to see Marilyn Monroe ascend the staircase on George Sander’s arm and make her entrance in the party  scene just after Bette Davis  as Margo Channing utters one of the immortal film lines of all time: “Fasten your seat belts, it’s going to be a bumpy night!” The audience stood up, hooted, hollered, cheered, whistled and applauded. It is a truly unique New York experience and I was in heaven . . .

EDNA TURNBLAD 2012: In “Hairspray”, Edna Turnblad wants time to stand still and she not move into the far out 1960’s.
I am at the 14th Street F line subway station, and I see this billboard and start photographing people rushing  by it not letting or having time stand still. Then . . . the 2012 version of Edna Turnblad passed by. Divine lives ! 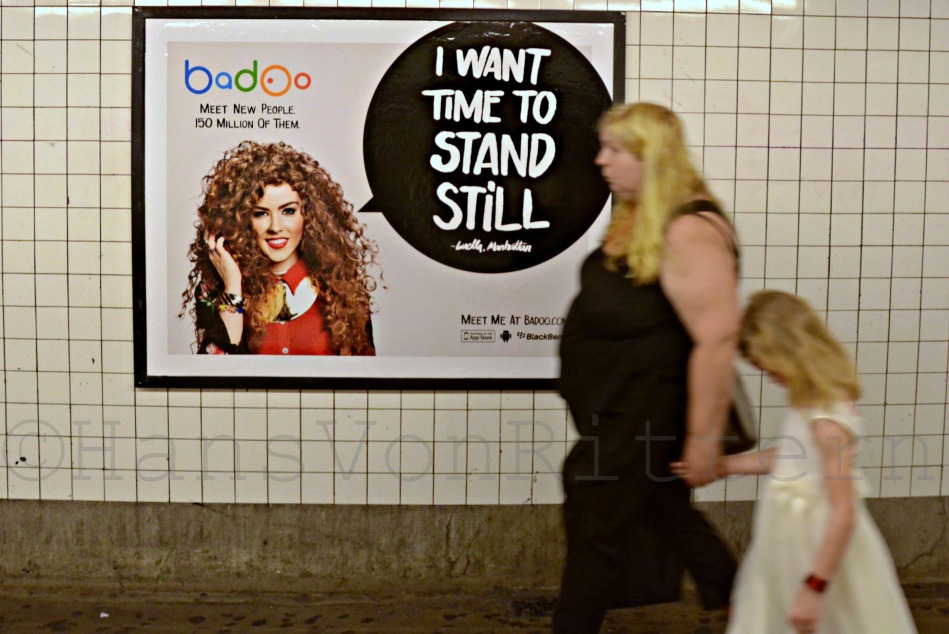 “I want time to stand still.”

STOOPED: It’s all a matter of time. It happens sooner or later, here we have an example of it happening sooner and later 🙂 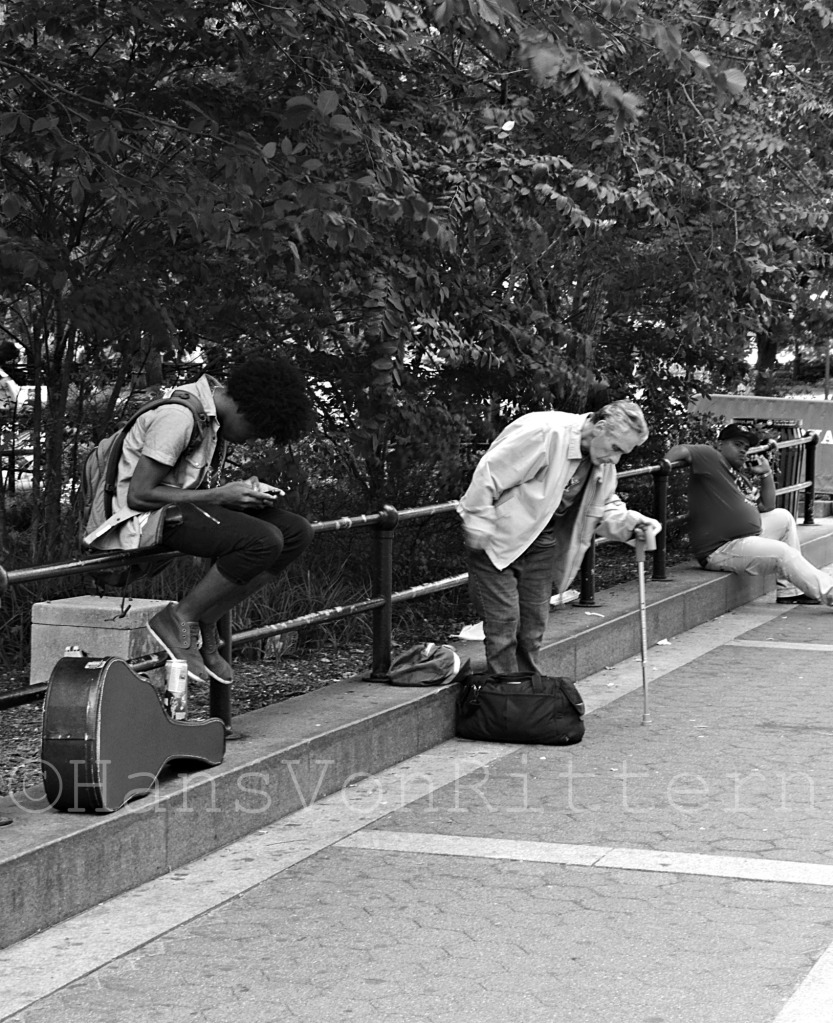 BUSTED:  This photo (along with a series of others) was published around the world. It is a hot August night, 2011 and body painter Andy Golub was testing the boundaries of the law by body painting his completely nude model Zoe West  in Times Square. The law states, that if it is for the sake of “art”, a woman is allowed to be totally nude in public. The police staff don’t seem to know that and enjoy ’the show’  for some time until they finally feel it is time to arrest her. She was later released without charges. My photos made page two of The New York Post and Daily News, Wall Street Journal locally and published internationally. We were then satirized in a cartoon on the notorious New York Post’s ‘Page Six’ the following day. A better compliment could not be asked for!

AMERICA: Standing in Times Square late at night, you witness the whole world coming together, tourists from all over the USA and all corners of the earth. Each side of the Army Recruiting Station at 43rd Street is lit with a huge neon American flag. Sitting there I realized, this is America, all shapes, all sizes, all colors – in silhouette they are all one.

Hello everyone! I thought I would start with some of my well known photos that has been exhibited in galleries, published and won awards. My first post will be a woman I have fallen in love with since I have photographed her.

A FOUND MEAL: Late night in Times Square is my favorite time to observe people. I will just wander about and pick people out of a crowd and trail them (ok = stalk) with my camera. I notice this lovely old woman pulling her roller suitcase behind her, she seems to blend into the crowd, except . . . she stops at every garbage can in the square. She is looking for her evening meal. She finds a couple of nearly empty drinks and pours them all into one large McDonalds cup. She finds a half smoked cigarette. Some unused napkins. Half a pretzel. And then – good fortune shines on her. In the garbage can at the corner of 46th and Broadway there is a, still hot, doggie bag from The Olive Garden containing a seemingly uneaten lasagna, with utensils. Having put her meal together, she searches for a table to sit down and spread out her ‘found meal.’ She sits with dignity at the table. Her silver grey hair whisping about her forehead in the light evening breeze. Life is good for the moment. I look at her, and wonder, what brought her ‘here‘? I alone know her story. The surrounding people at the other tables have no clue as to her situation in life. (There is a visual clue in the photo, her thumbnail is pitch black, from digging in the garbage cans.) I take a whole series of photos of her enjoying her meal. I am drawn to her, by her beauty and dignity – and sadness. Finally, I feel it is time for me to move on and as I leave, I notice two Italian tourists at the next table knowingly smiling at me and say “she is beautiful.”

Welcome to WordPress.com! This is your very first post. Click the Edit link to modify or delete it, or start a new post. If you like, use this post to tell readers why you started this blog and what you plan to do with it.