THE DAY THE PUZZLE FELL APART 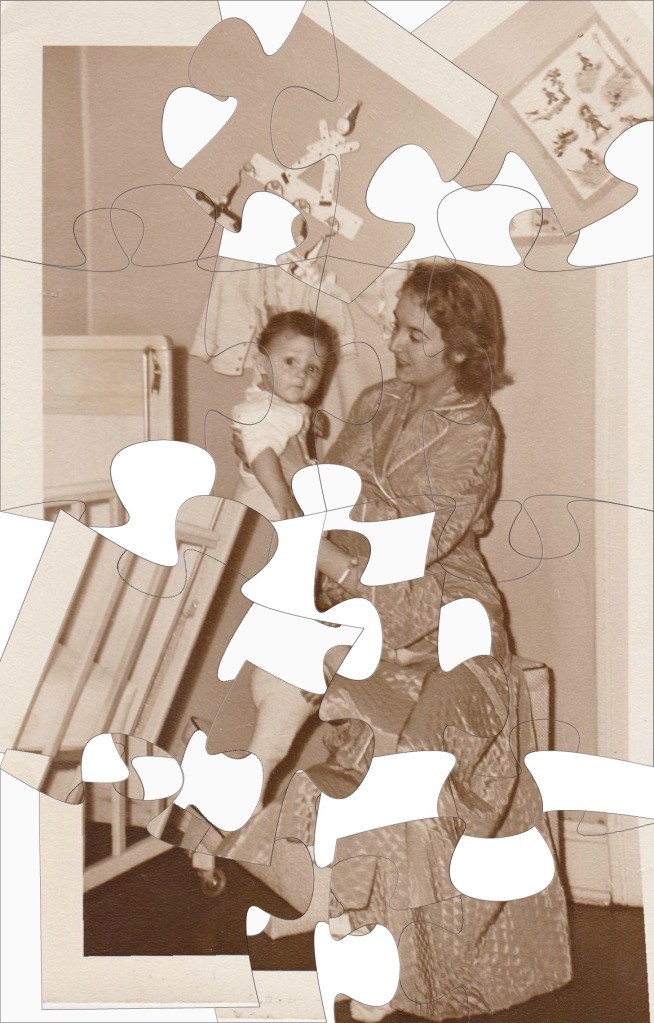 I‘M HERE, I‘M OK !  THANK YOU to all those concerned posts that I didn’t ignore but simply couldn’t answer. After Xmas there was frightening health news for my mom and lots and lots of additional disappointments and bad news all at once and I just emotionally shut off. I had absolutely no desire to photograph or to speak to anyone. I couldn’t feel. I actually also couldn’t find the words, me speechless = rare. I am now slowly grappling how to put it all into words and come back to Facebook and blogging.

Some said “just start posting/blogging again with no explanation,” but I felt after so many of us have shared our lives for so long I should explain…

So here goes: 2012 was one of the most unpleasant years of my life. Two horrible (Gray Line & On Board Tours) jobs and financial disappointments, a struggle with my photography/book and then a culmination of awakenings from  watching the news just brought me to an emotional shut-down.

I did launch my blog, that was absolutely wonderful! My photography web site by now has had over 6,700 hits, but no photographs sold. I have been told over and over by good friends of mine like Paul Ker, “No one buys photos anymore.” A very depressing reality, but that a book is the way to go. The answer was to create a book with the photos and the stories behind them but the people who offered to help were phonies and the computer program needed to self publish and print the book in (sadly) China or India is so confusing, I couldn’t learn it since my brain was already on overload. So I tried to concentrate on the book by years end, but then my printer isn’t good enough and to top it off, both my camera and lens fell, broke and cost me an expensive repair I wasn’t counting on.

I had wanted to do a 2012 year’s end blog and researching for it led me to be more and more distressed of what is happening to my beloved New York City. 2012 was a record year of losses of iconic stores, lounges, restaurants, mom and pop places, Tiles for America, hotels, buildings, etc., that were wiped out due to the greedy under-the-table real estate dealings of mayor Mike Bloomberg and evil councilwoman Christine Quinn. Zoning variances have become the norm. Quaint neighborhoods are now collections of glass boxes and look and feel like strip malls. Harlem is 60% white, Greenwich Village is now nothing but yuppies, European hipster-wannabees and chain stores. It depresses me to visit many of my once beloved neighborhoods, to give tours in them is a farce. Hospitals and schools are being torn down to make room for luxury condos. (The hospital I was born in is now closed and boarded up.) If councilwoman Christine Quinn were to become mayor it will be the end of New York City permanently as we know it. A depressing way to enter 2013.

It seemed every day I wanted to write the blog or post a photo – another news story hit of yet another demolition or closing, they were coming almost daily. I just couldn’t take it anymore. Political news added to my depressed feelings – I simply cannot take this damned bickering in Washington DC anymore. I am a staunch Democrat, but I am open enough to say – when we have a Republican president the country should be run by republicans and when we have a Democrat, things should go their way = an ultimate test to see who can fuck it up better or make the country better – ultimate proof. But this daily bickering, stalling and impasses has had me say ENOUGH! I used to be a MSNBC Rachel Maddow addict, I cannot take her anymore, she is brilliant, her research team is one of the best, but if the daily results are the same thing over and over “stalled, denied, fighting, bickering, more mass shootings” why bother to watch the news?? It is the exact same thing every day. So…I shut down news and Facebook wise. I discovered two great cable TV stations called METV and AntennaTV which show all the old shows, so I escape to see Mary Richards and Rhoda, Oscar and Felix (just to  hear that theme song cheers me up!), Leave It To Beaver=my favorite, Dick Van Dyke, Jeannie and of course the divine Aunt Clara and wonderfully wicked Endora on Bewitched. If god forbid something happens to the president, or another hurricane is headed this way – I’ll know about it, otherwise, leave me alone and stress free.

Hurricane Sandy added to my already dreaded feeling of loss of NYC. To this day Battery Park is wiped out, The Statue of Liberty and Ellis Island won’t open till July 4th, some Wall Street buildings are still on generators, South Street Seaport is ruined and now they are going to tear much of it down in favor of…….glass boxes. Lest we not forget the thousands and thousands in Queens, Staten Island and Brooklyn that FEMA has not helped, that are without daily necessities like hot water, toilets and grocery stores. It is disgraceful. Childhood shore communities are gone – but the mayor and councilwoman Christine Quinn want to build…MORE glass boxes in midtown Manhattan, it is their ultimate mantra “let them eat cake.” It is like living in Alice In Wonder/Greed-land and the emperor and empress are wearing no clothes.

Then shortly after Christmas I thought I was going to loose my mom. She has injured her hip by pulling a heavy box across the floor and that action, somehow caused the cartilage to slip out of place between the two main hip bones and she now has the bones grinding bone on bone which I am told is quite painful. We were told there are two answers: hip replacement surgery or really strong painkillers. Mom can’t even make it up one step much less bend, turn or kneel. So all of a sudden I had to be there all the time. The Von Ritterns live to be in their high 90’s. Mom being 87 wasn’t at all any concern, she is otherwise healthy as a horse except for slight high blood pressure. One day we were at her dinner table and she couldn’t get up and for the first time I saw this old feeble woman and that was what sent me into shock. This isn’t my mom! Could this be the end? This vibrant woman who stood hours on line to vote for Obama can’t even get out of her chair?

We visited endless doctors offering all sorts of surgeries and pills. Mom refused all. You see, we lost my grandmother/her mother due to hip surgery – she was under anesthesia so long, that the oxygen didn’t properly flow to the brain and she came out of it with instant senility. My grandmother’s sister, had a botched spinal surgery and was given mega doses of pain killers which caused her to loose her mind to the point of being senile as well. Both extremely vibrant women, gone due to back/spine surgeries and all those pills. Mom was instantly haunted and frightened by that and said “God dammit, I am going to be here a long time, I am not making a doctor richer with hip surgery and I am not poisoning my brain. I’ll just take Tylenol!”  (Well…sooner or later we will need more than just Tylenol…)

I couldn’t talk to anyone about it because when I did, as a few of you know, I lost it and broke down. I might be loosing my only living relative, my only living connection to my childhood, my history and my past. So I just shut down/disconnected. To top it all off, I threw out my back helping her and I also got blurred vision, explained to me due to stress. But – you have to learn how to make the lemonade out of the lemons or think sharply and say ‘what message are we getting here?’. The answer was finally a book, for both of us!

Our family history is astounding. Fiercely independent women who traveled the seven seas on their own, great-great grand parents who owned a coffee plantation in Kuala Lumpur Malaysia, grandmother/‘Oma’ and her sisters were opera singers for the Berlin Opera, surviving Germany in World War II, mom coming to America and starting a new life. It’s the German “Gone With The Wind”!

We realized we need to record this legacy. Mom being viewed as forever young would come to haunt us if she were suddenly ill one day and not capable to record our history. NOW is the time for us as I research the Von Ritterns. Since she can mainly just “sit” – I have set her up in a comfortable office space in her kitchen and soon the great autobiography will begin. As for me, a book is the way to go. A $9.99 paperback in perfect carriable size &/or E-book, that anyone visiting New York would say “this is truly the real New York“.

So mom and I are settling into a new pattern of me helping her daily as well as trying to run my household (such as it is), photographing, walking Noel her dog and of course feeding Oscar my pet squirrel on time. With spring having arrived and many of my touring regulars visiting, I am slowly ‘making a mental comeback‘. Two people responsible are two very dear friends Lynn Benton Black and Pamela Martin Hughes who gave me wonderful loving insight and support on our recent tour.

Most importantly I want you all to know, I wasn’t trying to be mysterious or rude  or diss-ing anyone. I just needed to be thoroughly alone to think and reassess. I couldn’t even think about “photos/blog of the day” (it seemed so trivial) when I thought I would loose mom suddenly – my brain just did an instant disconnect from all else. Please know  I am very heartened by all the kind posts of concern here. I read all your posts and treasure you all.

So – I’m going to try to juggle it all: Touring, mom, me, Facebook, socializing, photographing, our books, blogging (it‘s a lot). On Facebook I’m going to start a new feature called ‘Mondays on Memory Lane’. I may not have a P.O.T.D. (Photo of the Day)  every single day yet, and some photos may be a few months old, but – – – hey, I’m making a comeback ♥ !