Photo of the day: CHRISTMAS DINNER AT BENDEL’S WITH LIZA, SARAH-JESSICA, WOODY, MARILYN, CAROL AND AL HIRSCHFELD  – Since I was a little boy the magical drawings of Al Hirschfeld have absolutely fascinated me! The fact that a few twists of the pen could totally capture a person and their character was astounding to me. Every Sunday I would get up early to run to the corner store to get a Sunday New York Times and pull out the Arts & Leisure section to see who had been ‘Hirschfelded’. That was a steadfast tradition from about 1964 till Al Hirschfeld’s death in 2003. I have boxes and boxes (and boxes) of clippings of all the Hirschfelds I could find from then till now. 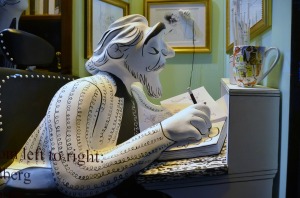 My dream of meeting him came true one day in the year 2000, in the theater that was later to be named for him, The Martin Beck now The Hirschfeld.  The story of meeting him is a story unto it’s own. I had met the greatest of the greats until then: Ingrid Bergman, Bette Davis, Elvis, Elton, Cher, Liz Taylor, Katherine Hepburn, but meeting Hirschfeld had topped them all. I had met the man that had documented close to 100 years of America’s entertainment history. It was the most humbling and breath taking moment of my life.

When Hirschfeld died, I bought many of his possessions at the 2011 Doyle Galleries estate sale, his pens and pencils, his large wooden pencil box, his shoulder bag and many, many other items, all lovingly displayed in my home.
Fast forward to November 14, 2013 and I am standing in front of Henri Bendel’s windows waiting for the grand unveiling of their Christmas window featuring a three dimensional tribute to the great beloved Hirschfeld.

I waited front row, clutching my Hirschfeld owned shoulder bag which still has his handwritten name tag attached written in his trademark squared signature. Due to arrive were Jerry Stiller who is featured in the window and Margo Feiden, the sole curator of the Hirschfeld collection. They were followed by the president of Bendel’s, the artistic director, and by Tom Carroll who created the pieces and Bendel’s Assistant VP of Visual, Gilberto Santana. Once inside, I showed the president of Bendel’s my Hirschfeld bag, “You must meet Margo!” (Shades of ‘All About Eve’!!) She welcomed me with open arms and warmth. There I was, after 49 years of collecting, sitting with Margo Feiden, holding hands and telling her my Hirschfeld stories. She so very much reminded my of my dear aunt “G” (see older posts here.) I told her: “Back in the 1960’s and 70’s I was the quintessential stage door Johnny. I had met Bergman, Davis and Crawford…” Margo squeezed my hand and cut me off, “but when you met Hirschfeld…” she interrupted. “Yes!” I proclaimed, “how did you know?” “I can see it in your eyes, it’s still there.” She held my hand tighter. I will not forget that moment. Bendel’s has a limited edition ($100.) poster available for sale commemorating the evening which I asked Margo to sign. “I hope you can read this,” she said as she rolled it up before I could read what she had written to me. I was on cloud 9 as I thanked her and left.

I called mom and told her of the wonderful evening and how my Hirschfeld story had come full cycle. “Well what did Margo write to you?!” mom asked. I didn’t know, because shortly thereafter it was tied up in the traditional brown/white polka dotted Bendel bow and into to fancy large shopping bag it went. “I’ll stop by your apartment on the way home and we can unveil it together.” I rushed home holding onto to it for dear life. 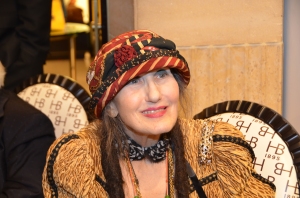 Once in mom’s living room, we carefully untied the bow and unrolled the large parchment poster, our eyes transfixed on the small handwriting on the poster, trying to make out the inscription. Then we both looked at up each other and were speechless when we saw what Margo had written: “To Hans, with your enthusiasm Bendel’s won’t need lights, Margo Feiden.”
My heart is full. 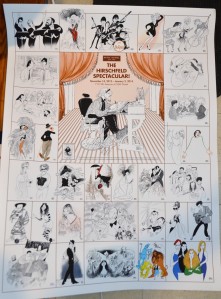 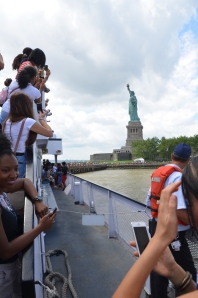 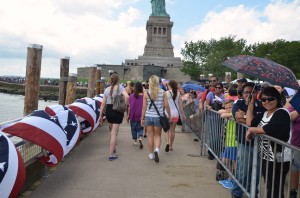 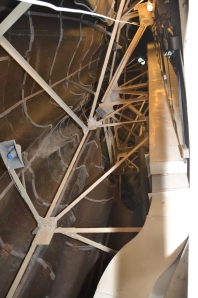 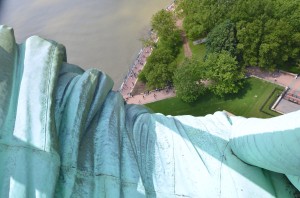