Photo of the day: A DAY AT THE MUSEUM OF NATURAL HISTORY 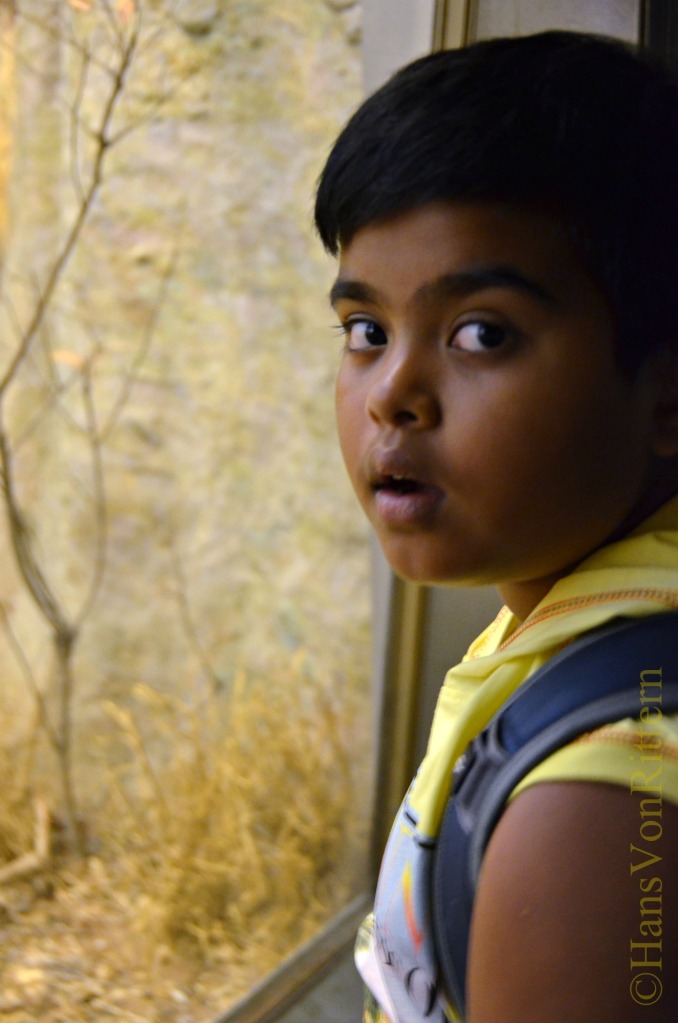 Photo of the day: A DAY AT THE MUSEUM or THE WONDER OF SCIENCE – The Natural History Museum on Central Park West in New York City is a guaranteed place of wonder for any children of any age. Their eyes widen with excitement as they enter the doors, oooohs and ahhhhs followed by “I want to see the dinosaurs! No, I want to see the meteors”! Just hand them a map of the museum with their chaperone – and set them loose!
If you have the time and extra expense, take them to the Hayden Planetarium’s theater in the round for the “Journey to the Stars”, a 1/2 hour show narrated by actress Whoopi Goldberg (on tape, not live). “Featuring extraordinary images from telescopes on the ground and in space and stunning, never-before-seen visualizations of physics-based simulations, the dazzling Journey to the Stars launches visitors through space and time to experience the life and death of the stars in our night sky, including our own nurturing Sun. Tour familiar stellar formations, explore new celestial mysteries, and discover the fascinating, unfolding story that connects us all to the stars.” The film is projected on the domed ceiling of the planetarium convincing some of my little guests that the ceiling was actually turning.
Back inside the museum you have five floors of difficult choices to make: Dinosaurs – over 2 billion bones – the largest bone collection in the world, stuffed animals from all over the world, butterflies, space exhibits, rocks and minerals, ocean life, more dinosaurs and endless fascinating gift shops. 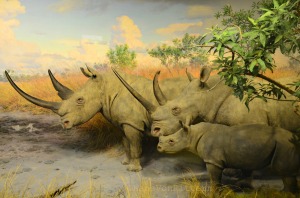 Rhinoceros family in the graslands of Africa exhibit 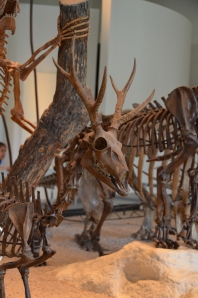 I took my 35 students from India there Monday and they were like kids in a candy shop. Immediately the groups split up into their hierarchies. Cool girls together, science geeks together, boys who wanted to see how many fun things they could buy, the bewildered, etc, and one loner polite boy named  Kavish Singh. On our trip he expressed no interest in buying anything for himself or his loved ones back home. “It is not necessary” Kavish said wisely for his eight years. “I don’t want anything, my money is just for emergency purposes.” (‘Oh boy I thought, if that woulda been me…’) I tried in vain to get him to buy a souvenir to no avail, he stuck to his earnest guns.
Kavish had kept to himself the whole trip and was always very quiet. I did discover he believed King Kong was real and that he was a very introspective, shy boy. So when we got to the museum, to my great surprise, he came up to me to hold my hand and wanted to come with me and our chaperone Ankur to tour the museum alone. “Well, you have us all to yourselves, what do you want to see? Meteors?” “No.”, Butterflies”, “No”. “Dinosaurs…” Kavish said quietly with a nod. 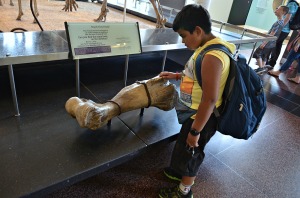 A sense of wonderment

Ok, so up to the top fifth floor we went. As we reached the top, he transformed, his shell was dropped and he wandered ahead, his heavy back pack on his shoulders, to marvel at what he had only seen in books and movies. “Oooooh sir, are they real?” “Yes they all are! You are the boss here, you take us where you want to go!” The rest was magic. The little wheels in Kavish’s mind were spinning a mile a minute. He wasn’t the serious little man he had been, but was a little google-eyed boy. His face broke out into beams of smiles he seemed to feel safe to reveal.  It was a joy for us to lead him through the giant Dino-turtles, winged serpent like creatures hanging from the ceiling, gigantic bones and then on to the stuffed animals in their natural habitats, including soils, and vegetation. “Do they ever come alive” Kavish asked sheepishly. He knew his belief in King Kong had already been thwarted, “No,” I explained, “that was only in the movie ‘A Night At The Museum'”. He wondered and thought, reflected on the animals some more, “but perhaps if we turned out the lights and left, then we could look in the windows and see what happens?” Since our bus was waiting to take us back to the airport, I advised we will have to wait for another late night to see what really does happen in ‘a night at the museum’. . .