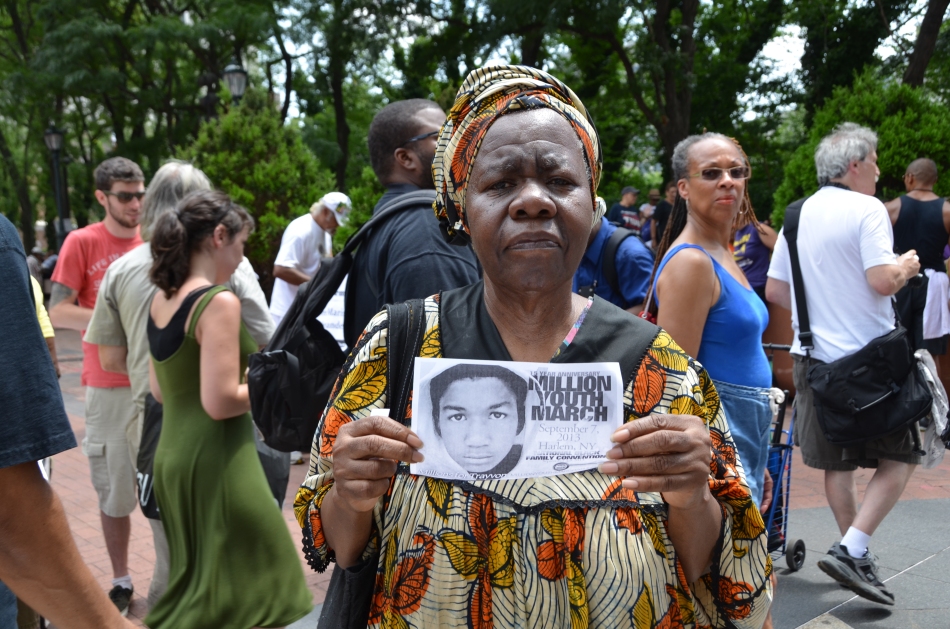 Photo of the day: A NOD AND THUMBS UP FROM JAY-Z AND SYBRINA MARTIN-FULTON!

Jahvaris Martin listening to his mother

Photo of the day: A NOD AND THUMBS UP FROM JAY-Z AND SYBRINA MARTIN-FULTON! – It was an incredible impassioned day for me Saturday at the New York rally for Trayvon Martin. The night before I made a sign which read “#B37 BULLIED THE JURY” (see my previous blog) to hold up at the rally for all to see. I got there two hours early, at 10am and met so many passionate people, angry, sad, determined to do something. All colors, all genders, all ethnicities, all ages = America. I stood my ground at the front of barricades where the press was starting to gather. TV crews and newspapers from around the world – and me. One indignant reporter who came at 11:30  argued she should have my spot since she was “press”. I told her “if you’re so ‘press’, you would have gotten here earlier, you snooze – you loose.” I stood my ground with one other young lady from New Jersey.

Hans Von Rittern (me) at rally with my sign

The crowd around me 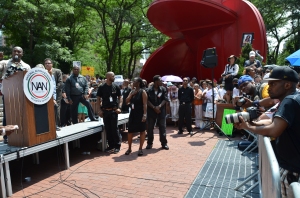 As the rally was starting, a surprise visit was made as Beyoncé and Jay-Z suddenly appeared from the background and stood silently nearby along a wall. Rev. Al Sharption introduced the powercouple as “one of the most badass muscians around!” “They are not here for a photo op, they are here as parents,” Rev. Al Sharpton said to a huge round of cheers and applause.  “Jay Z told me, ‘I’m a father. Beyoncé is a mother.’ We all feel the pain and apprehension — the law must protect everybody, or it doesn’t protect anybody,” Sharpton said. “We do not come from hate, we come from love of children.” Protestors chanted at Beyoncé “No concerts in Florida!”
Being in the front row I had three goals: for my sign to be seen by the Trayvon family and supporters, to see Sybrina Martin-Fulton up close and of course to take great pictures. I got luckier than I could have imagined.

Beyonce & Jay-Z read my sign seconds before he gave me the thumbs up!

Beyonce staying in the background to listen

Since I was front row, I held my sign with my left hand and my camera in my right hand. As Beyoncé and Jay-Z arrived, they looked into the crowd but fixed their eyes on me and my sign. There they were looking at me smiling, and just as I was taking their picture – Jay-Z read the sign and gave me a thumbs up! A thumbs up from Jay-Z! OMG ! I was so stunned I didn’t click the camera to get the shot, the photo you see here is seconds before he acknowledged me. 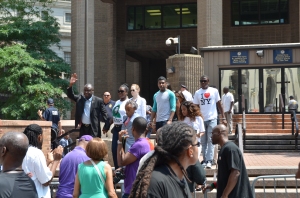 When Sybrina came onto the stage she seemed overwhelmed by the thousands that had braved the oppressive heat to stand ‘their’ ground. As she stood there for a few moments she scanned the front row of mostly reporters and saw me and my sign. She looked at it, look into my eyes and gave me a discrete nod, it was an intense moment for me, I quickly gave her the thumbs up and love hand signal and she smiled at me. To be acknowledged by this gracious strong woman out of all the nearby people was an experience that moved me to tears. The photo here is of her looking at my sign. When she finally spoke,  I lost  it and just cried (as many did). It was a touching moment to see a grieving mother maintain such dignity and grace. What was most powerful to me was how she firmly held onto her surviving son’s hand for support throughout most of the rally.

Sybrina Fulton thanked the crowd profusely with a shaking voice as her eyes teared up. “Thank you, thank you from the bottom of my heart, I will not disappoint you.” “Trayvon is not here to speak for himself,” Sybrina Fulton began. “Trayvon was no burglar,” Sybrina said. “George Zimmerman started the fight, and George Zimmerman ended the fight.” She was refusing to be lost in her own hurt and she urged others not to allow themselves to give way to anger. She said she wanted their voices to be heard, but to be effective they had to stay true to what has been her unwavering approach amidst the outrage. “Peaceful.” She said rather than railing, she and those working with her will be planning, carefully divining the most effective course. “I feel nobody is hurting more than me and my family,” she said. “So please, follow us. Let us lead you.” Her goal was clear: “So we change some of these laws.” “My son died without knowing who killed him. He died without knowing who his murderer was.”

The rally began and ended in all joining hands in prayer. I took so many photos and have so little time to edit them all thoroughly, but here are a few to capture to moment. Afterwards it was like a large peace rally, all displaying their signs and messages. Many of those I will blog about in days to come.

“THIS HOODIE SHOULD NOT KILL ME”

Photo of the day: BEYONCE AND JAY-Z SHOW SUPPORT FOR TRAYVON MARTIN

Photo of the day: BEYONCE AND JAY-Z  SHOW SUPPORT FOR TRAYVON  MARTIN – Surprise guests at the New York City rally for Trayvon Martin were power couple Beyonce and Jay-Z. They were not there for the publicity and simply stayed in the background. Rev. Al Sharpton said “they are not here for a photo op, they are here as parents to show their support.” The crowd went wild. I was lucky enough to be front row and got some of the few photos that were to be had.

Photo of the day: NOT GUILTY?! – RALLY FOR TRAYVON MARTIN TODAY AT YOUR LOCAL FEDERAL HALL! 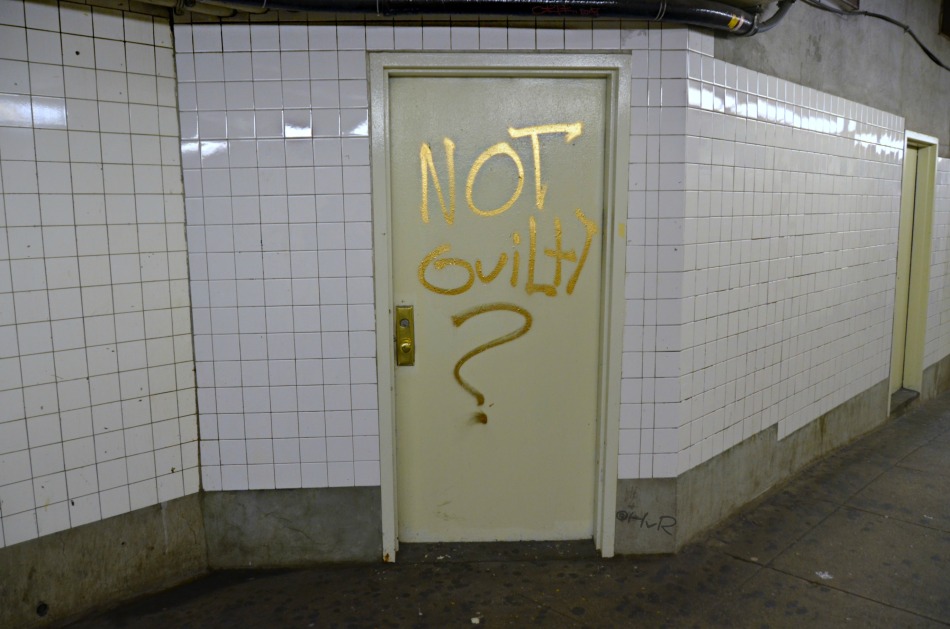 Photo of the day:

– Join the millions of Americans across the country today Saturday July 20, in front of your local Federal Building to show your support of the grave injustice of the murder of Trayvon Martin.

The “stand your ground law” is a red neck excuse for murder, this is not the era of Tombstone, Arizona of shoot first – ask questions later.

Join the civilized other Americans to show your love, outrage, peaceful support and brotherhood of this boy’s lost life.

Trayvon mother Sybrina Fulton will be at the New York rally – so will I !

Link to all the planned USA rallies: http://www.mhoodies.org/national_day_of_action_in_100_cities

TRAYVON’S PARENTS WILL BE IN NEW YORK CITY – http://nationalactionnetwork.net/press/the-mother-father-of-trayvon-martin-to-join-rev-al-sharpton-national-action-network-nan-for-the-100-city-%E2%80%9Cjustice-for-trayvon%E2%80%9D-vigils-in-front-of-federal-buildings-on-Saturday/

Martin Luther King, III will join NAN at this location