Photo of the day: DESPITE THE GOVERNMENT SHUT DOWN, THE FIGHT FOR LIBERTY CONTINUES BY MURALIST VERONIQUE BARRILLOT

Photo of the day: DESPITE THE GOVERNMENT SHUT DOWN, THE FIGHT FOR LIBERTY CONTINUES BY MURALIST VERONIQUE BARRILLOT – Today the despicable Republicans have shut down the government. Tourists here in New York that have traveled half way around the world to go to Liberty Island are literally left out in the cold. The most upset are those who have crown visit tickets, those tickets have been ordered two to three months in advance and you arrive in New York = closed. 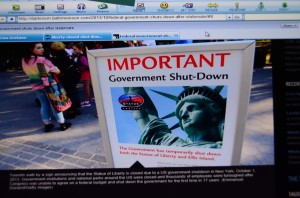 One of the places you can see Miss Liberty still fighting for her freedom is at the Graffiti Museum 5 Pointz on Jackson Avenue in Long Island City, Queens, right next to the 7 train Court Street Station. World famous 5 Pointz, as so many other treasures in New York, thanks to the greedy cancer that is the Bloomberg administration, is in great danger of being torn down in favor of twin mirror glass apartments.

To make her (perhaps final) statement, French muralist Veronique Barrillot has been given permission to paint a giant mural directly on the Jackson Avenue side for all to see. It is the Statue of Liberty, grimacing as she holds a paint pallet and paint brushes. Veronique is finishing the mural today, so I will not reveal  the full image of it yet.  Veronique states: “The homage I would like to pay to 5 Pointz is that of our common heritage and of our faith in the future and in liberty.” As of this moment’s government shut down, that immediate ‘future’ looks grim. The longest government shut down was also the most recent, from Dec. 16, 1995, through Jan. 5, 1996. That’s 21 days. No Grand Canyon, no Yellowstone, no national zoos, no landmarks like the Lincoln Memorial or the Washington Monument – no Statue of Liberty.
Paint on Veronique, paint on ! Vive l’art!
VERONIQUE’S AWESOME VIDEO ‘PORTFOLIO’! http://www.youtube.com/watch?v=sPFiydrnAYg
VERONIQUE BARRILOT’S WEB SITE: http://www.fresquesmurales.fr/
5 POINTZ WEB SITE: http://5ptz.com/

Photo of the day: GATEWAY TO LIBERTY

Photo of the day: GATEWAY TO LIBERTY – When in Paris – you have to go to see the Eiffel Tower. When in New York – you have to go to see the Statue of Liberty. Every portion of the grounds are a treat for the eye! Whether you have crown access tickets (sold out till November 2013) or pedestal/museum access or just tour the grounds, it is an experience you won’t forget.
If you have access passes to the pedestal you will see the lobby yields many treasures, such as this awe inspiring view from the second floor balcony.
www.statuecruises.com
The Statue of Liberty exhibit, which opened in July 1986 and is located on the second floor in the pedestal of the Statue, traces the history and symbolism of the Statue of Liberty through museum objects, photographs, prints, videos and oral histories. In addition to historical artifacts and descriptive text, full scale replicas of the Statue’s face and foot are also on display. The main historical sections include: From Idea to Image, Fabricating the Statue, Stretching Technology, Fundraising in France, The Pedestal, Fundraising in America, and Complete at Last. The next area focuses on the symbolism of Liberty with sections titled Mother of Exiles, Becoming the Statue of America, Century of Souvenirs, The Image Exploited and The Statue in Popular Culture.