Photo of the day: SHANNON POT AT 5 POINTZ SERVES IT’S LAST FROZEN DRINK – Friday January 3rd, 2014, was yet another nail in the coffin of what was a vibrant neighborhood block. After the destructive whitewashing of the art work at 5 Pointz by greedy owner Gerry Wolkoff, it was also the final night of the neighborhood hangout bar The Shannon Pot. 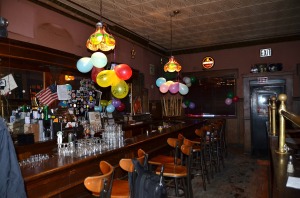 The extremely cold 10°F degree weather added to the morbid feeling in the air. Only a few of the die hard regulars showed up including Meres One and Marie Flageul to join co-owners Maureen and Salah for a final round of drinks. To my surprise, as I arrived I was greeted by water dripping down from the ceiling. The frigid temperatures had burst the pipes and was flooding the bar. The water had been shut off but it was still ‘raining’ inside the bar. The water from above had damaged the juke box with Meres’ disco favorites causing the sound to go from high to low every few seconds only adding to the eerie feel of the night.

So there we were, with our coats and jackets on in the cold bar and no water except for what was coming from the ceiling, which made for slippery dangerous last dance. Instead of dancing the walls were tagged, good times and future times were discussed as 14 years of Maureen’s and Salah’s ‘home’ were coming to an end. How to remove the wonderful old hand carved wood bar and all it’s contents were strategized. “They don’t do woodwork like this anymore” said Salah proudly. I looked behind the bar itself and at the ancient wall paper on the wall which seems to be of impressed plaster work painted gold. No one knows just the exact history of the bar but if these walls could talk, we would have 100 years of Long Island City history to tell. All the 5 Pointz events the had been held here, the celebrations of hip hop and street art add so much more history to this little Irish style pub. (My awesome surprise birthday was just celebrated here a few weeks ago.) Another beloved place gone in the era of mass destruction of New York’s past. 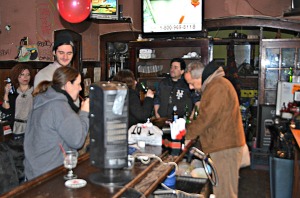 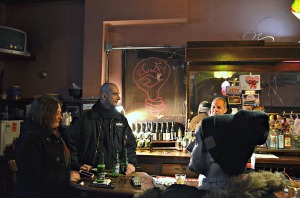 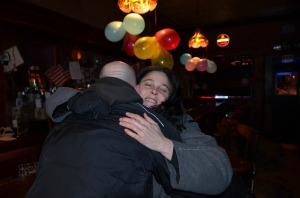 During the evening Marie stepped out for her usual cigarette, as she stood in front of the bar she observed a pigeon flying towards the building to seek refuge form the cold, and seconds before it could reach the building, it simply fell out of the sky succumbing to hypothermia. Marie’s mission was to rescue the bird. We got a box, lined it with tissue paper and gently placed it in the box. It did not even resist. We placed it in the back hoping it would warm up. (It was in desperate need of sleep as well.) Every so often we would check to see if Marie’s pigeon was reviving, it barely was, but towards the end of the night was fluffing itself up, a hopeful sign. As a final act of kindness, Meres and Marie took the pigeon to their garage to let it warm up and revive. Two days later it flew off to join the world again. 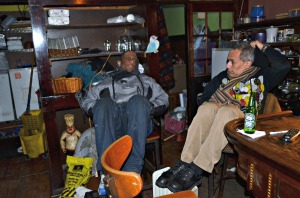 The man with a mission

Meres and Marie and all the fantastic 5 Pointz crew are greatly symbolized by our little pigeon – we may be down, but with a little help from our friends – we are not out. Maureen and Salah will reopen at a new nearby location at 21-59 44th Drive, off of 21st Street soon. 5 Pointz will rise again like a phoenix (or our pigeon) and with the creative force of the artists and minds behind Meres and Marie, look out for a brighter and bolder future for Pointz! ! 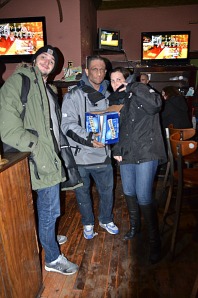 Final exit – (with the pigeon). 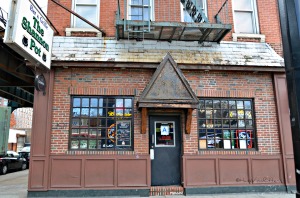