Photo of the day: “LADIES AND GENTLEMEN, THE BEATLES!”

Photo of the day: 2-9-1964 8:00PM  THE BEATLES CHANGED CULTURE FOREVER – On February 9th, 1964 just a few minutes after 8:00pm America was changed forever with these immortal words uttered by Ed Sullivan “Ladies and gentlemen the Beatles!” 70 million TV viewers, America’s largest TV audience to date watched frantic girls scream to the strains of “All My Loving”.
Say and think what you will but after 9:00pm our music, fashion, behavior, styles, art and society had changed like a boulder crashing over a cliff. It was a teenage sonic boom that suddenly took over. Adults couldn’t understand this “yeah, yeah, yeah” nonsense. Today Beatles music is considered easy listening and elevator music that young kid’s grandparents listen too (hard to wrap your head around that…). It has influenced many musicians ever since, it’s amazing how far we have come. In honor of this historic broadcast the Ed Sullivan theater here in New York City has recreated the now iconic marquis of that night.
The program opened with The Beatles, who sang “All My Loving,” “Till There Was You,” and “She Loves You,” followed by a magician and excerpts from the Broadway musical “Oliver” with Georgia Brown and ironically future “Monkee” Davy Jones in the cast, yes that Davy Jones! Mimic Frank Gorshin impersonated movie stars as political leaders and Tony Award Welsh singer/actress Tessie O’Shea sang, followed by comedians Mitzi McCall and Charlie Brill. Later in the program, The Beatles performed “I Saw Her Standing There” and “I Want To Hold Your Hand.” The program closed with the pantominists Weels and The Four Fays.
Here is a video of that groundbreaking performance including some video of the Beatles partying at famed disco the Peppermint Lounge as girls teach Ringo the latest dance steps. http://www.jukebo.com/the-beatles/music-clip,the-ed-sullivan-show-first-appearance,qp8rul.html 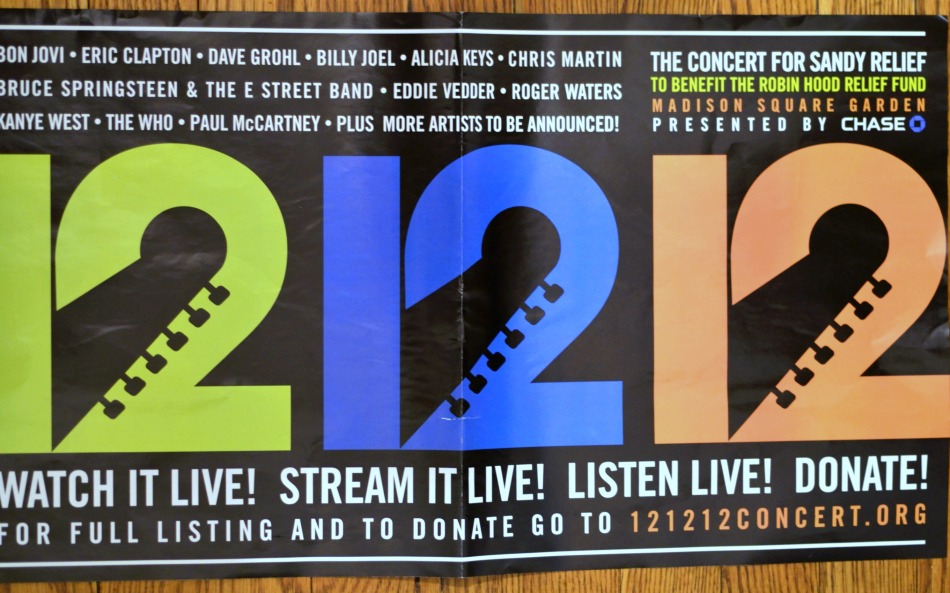 Photo of the day: 121212 WHERE IS THE HELP NOW? – One year ago today there was a monumental concert effort to help the victims of our hurricane Sandy. While a valiant effort it was, there are still today thousands of people without homes in New York and New Jersey, miles and miles of seashore destroyed.
One year later, there are thousands of people suffering in the Philippines from Super Typhoon Haiyan. The destruction was catastrophic. Storm clouds covered the entire Philippines, stretching 1,120 miles — equal to a distance between Florida and Canada. The deadly wind field, or tropical storm force winds, covered an area the size of Montana or Germany. Winds gusted an unequaled 195 to 235 mph! Over 10,000 are dead, most of the poor population is homeless. 80% of the structures are flattened.
One year later: Where is the 121213 concert?