We have been loosing our city at a rapid speed since the 12 year Bloomberg administration. Our new mayor Bill DeBlasio didn’t make things any better. A shill and phoney sell-out as our city’s history continues to be torn down left and right while being raped by an overbuilding of glass towers where they ought not to be.
As a tour guide I am supposed to tell people how wonderful New York City is...I do. But they don’t see that Harlem is now only 40% black, overrun by self-righteous white yuppies renovating Harlem’s brownstones pushing the original residents out. Greenwich Village once an epicenter of gay culture, dance clubs, cool quirky shops, cutting edge boutiques is now devoid of anything gay, buried in GAP, Polo, Starbucks, Sephora, Michael Kors, more GAP, more Polo, more Michael Kors. (Btw, Michael Kors being a screaming queen doesn’t count.)
The mushroom rate of the ‘space needle’ über high, über rich residential high rises on 57th and 58th Streets will put parts of Central Park’s south end into permanent shadow at certain times of the year. Jackie Onassis is turning in her grave.
Jackie O. would also be horrified to discover that grand Central Terminal is to be encased in super tall, super glassy high rises, therefore dwarfing the spectacular station, reducing it to a needle in a haystack.
Tribeca and Soho once filled with artists and art spaces are now filled with tourists artfully shopping. Times Square has become a 2nd rate shopping mall filled with Elmos badgering your for $5 photos. The lower east side aka ‘the Bowery’ is rapidly loosing any trace of our large immigrant history. It IS filled with our ‘new immigrants’ the young rich, spacey Millennials, trust fund babies and tech company millionaires. Apartments costing $1 million in the Bowery are cheap.
Little Italy is nothing but 6 or so blocks of Italian restaurants trying to hang on while the Chinese and the stores of Soho eat up their once large thriving Italian neighborhood. Fuggedaboudit.
New York’s harbor was once the busiest harbor in the world. Today, with a combination of damage from hurricane Sandy and the sheer greed of the Bloomberg/DeBlasio real estate ‘developers’, in South Street Seaport nothing will be left but a few gratuitous red brick buildings and only one old sailing ship to be now surrounded by a mirror glass ersatz ‘Pier 17’ and two gigantically tall mirror glass ‘luxury towers’ encroaching on America’s historical land mark the Brooklyn Bridge.
Go to Brooklyn then you say? Oh no, that is being gentrified at a hyper speed such has been never witnessed before in America. The foot of the Brooklyn Bridge is now being encased in a towering glass apartment building in DUMBO and the once spectacular view of the bridge from the Brooklyn Heights promenade is now obliterated by a gigantic apartment complex. If anyone would have told me that one day the views of the Brooklyn Bridge will be gone, I’da said you’re nuts.
Further in Brooklyn, whites buying $1+ million town homes in Bedford–Stuyvesant is now the norm. What was once our largest African American neighborhood, now has it’s residents being forced to go back to their Southern roots where they might be able to afford the rent. Meanwhile ultra hipster Williamsburg battles it out with ultra orthodox Satmar Jewish Williamsburg for real estate, who will win is anybody’s guess.
Hey, but Hans you’re safe in Queens. Not so, as my neighborhood fights off the flood of ‘poor upper middle class’ who can’t quite afford the $500,000 to $1 million dollar glass towers of the East River’s Long Island City. One by one we are seeing the affordable shops disappear, street vendors forbidden and a slimey corrupt councilman like Jimmy Van Bramer sign off on real estate deals wiping places like the spectacular 5 Pointz Graffiti Museum and the immigrant’s car-repair shops of Willet’s Point off the map while he brown noses his way up in the mayor’s administration.
If anyone has noticed, I haven’t posted daily “Photos of the Day” since mid June, I needed time to reflect. I will continue to tell people how ‘wonderful’ New York is, but I will also tell them that the city is an illusion, a big grand, sparkling, smoke & mirrors illusion. With my camera I will try to find something worth capturing that someone’s cell phone camera has not. My main concentration will be on researching and writing a book about my Von Rittern land baron roots in Bremen, Germany, and a second book on my Broadway stage door memories.
In the meanwhile, my German guests, while taking my tours say to me, “Sadly, it’s happening in Germany too, capture it while you can.”
I’ll try.

Joan Rivers’ funeral today was filled with surprises and disappointments. The surprises were the great wonderful celebs that showed up on a moment’s notice, many by foot sauntering up 5th Avenue! I was 1st row behind the reporters but they …were all on ladders and mostly barricaded a good camera shot, but between the elbows and butts I saw:
To think I saw in one hour: Kathy Griffin (very shaken) and Rosie O’Donnell arrive together, Howard Stern, Judge Judy!!, Rachel Ray, Andy Cohen (by foot, one of the few to wave to the crowd), Geraldo, Barbara Walters, Michael Kors, Ivanka Trump walking up 5th, Carolina Herrera, Donald Trump (by limo), Sarah Jessica Parker who you could see kept saying “amazing, amazing” with a big broad smile, Whoopi Goldberg (in tears) coming on foot from around the corner, columnist Cindy Adams, reporter Deborah Norville, Letterman’s Paul Shaffer, Joy Behar very upset, Marlo Thomas and husband Phil Donahue walking hand in hand up 5th, Glenn Close (she’s tiny!), Hugh Jackman and Audra McDonald who both sang in the service, Wanda Sykes, Hoda and Kathie Lee arriving in same car, Dr. Oz, singer Judy Collins, Clive Davis, the complete cast of Fashion Police including Giuliana Rancic, and Kelly Osbourne looking fabulous in her purple meticulously curled mohawk hairdo.  The only photo I got was Whoopi and Ivanka 😦
The Gay Men’s Chorus sang “There’s Nothing Like a Dame.”
The disappointments: NO red carpet or craft services! WTF?! That was exactly what Joan had requested! Biggest disappointment of all – NO Meryl Streep. The least she could have done was to send in a tape of her “crying in five different accents.”At least my friend Susan Godwin was there to show support from animal and dog lovers and me making it clear I was saying ‘thank you’ for her support of the gay community her entire career long. Thank you Joan.

Best quote from the service: Howard Stern paid tribute to his friend, joking, “I hope Joan is somewhere chasing Johnny Carson with a baseball bat,” and added, “Joan was a best friend for the world.” 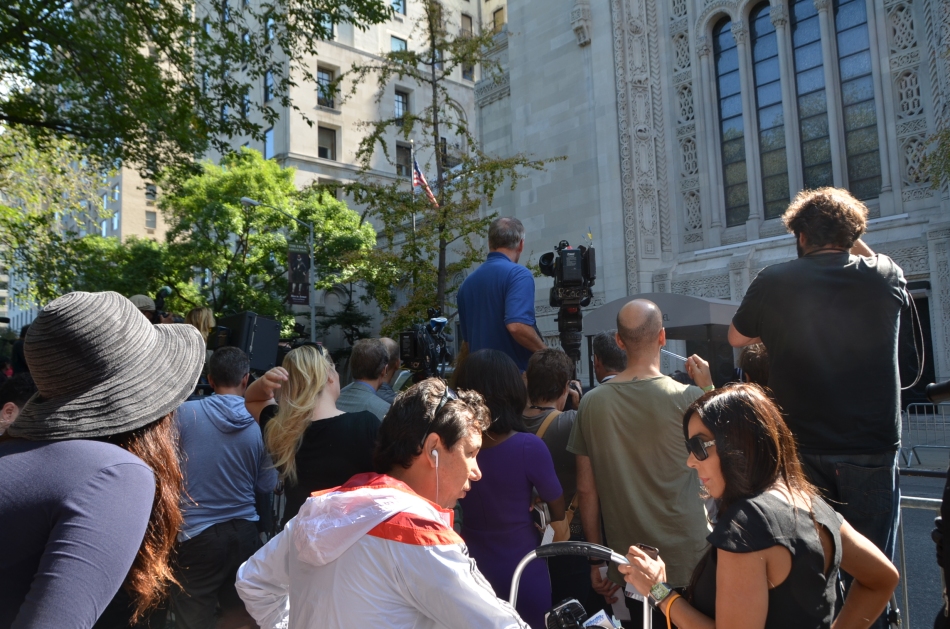 Photo of the day: TRASH AND VAUDEVILLE STILL HAVEN’T GONE OUT OF STYLE ! 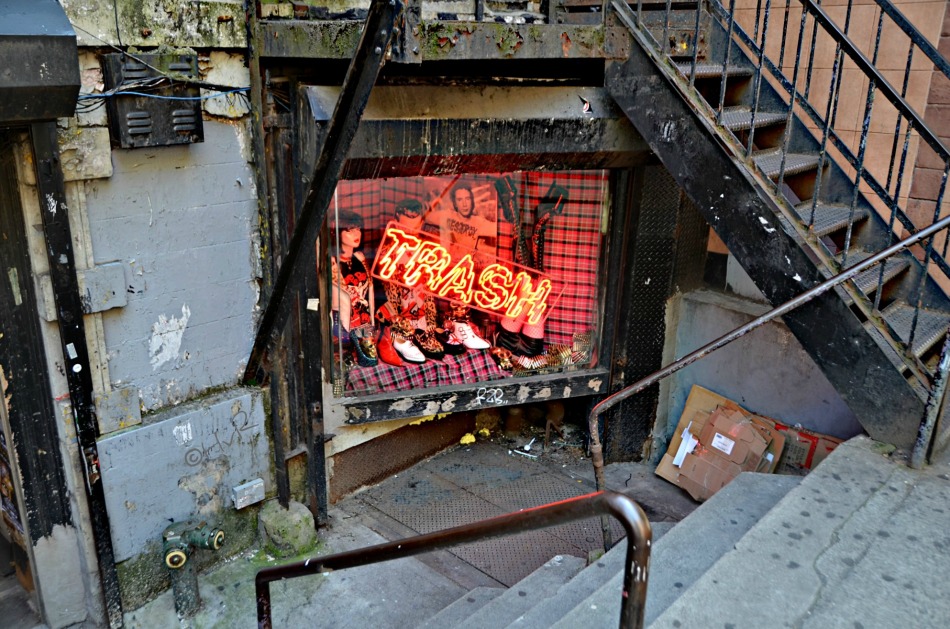 Photo of the day: TRASH AND VAUDEVILLE STILL HAVEN’T GONE OUT OF STYLE ! – I have been going to Greenwich Village since the early 1960’s. I remember the evolution from beatniks, to modsters, to hippies, to gay culture invasion, to 70’s disco babes, to the Rocky Horror scene, to punk rockers – pins and needles everywhere and then….it all died off with the gentrification of the area after the AIDS crisis. The east  and west village have become, for the most part soul-less. The funky shops, store fronts, building, and people are mostly gone. The west village centered around Christopher Street has lost it’s soul long ago, it’s just a tourist curiosity abounding with Polo, Calvin Klein, Michael Kors and damned GAP stores every few blocks.  The east village was home to the thriving punk rock scene has become a sterile college campus for the universities. CBGB’s punk rock club’s closing in 2005 was one of the major  nails in the coffin. Since Mayor Bloomberg’s greedy empire has taken over with the zealous assistance of council’woman’ Christine Quinn, there is not much left. One of the remaining treasures is a little stretch of East 8th Street between Third and Second Avenues where some of the old time stores are still hanging on. The whole street, for the most part, still has that funky, grungy feel with wonderful stores like the comic book store and of course TRASH AND VAUDEVILLE. They have been there since 1975 and is still going strong! 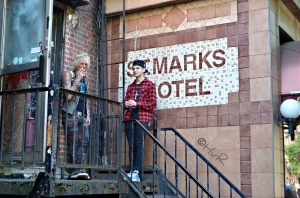 The photo avbove of Ray Goodman shows the old ‘St. Marks Hotel’ mural behind him, that used to be the notorious gay baths (originally Turkish steam baths) ‘The St.Marks Baths’ which was closed down by the city in December of 1985. T+V was making ‘kinky boots’ long before the film or Broadway musical even existed. Here is their history from their own web site: “Born out of the 1970’s rock and punk scene on St. Marks Place in New York City, Trash and Vaudeville has always provided a wide variety of alternative fashion for Rockers, Mods, Punks, Goths, Rockabillies, and everyday working class heroes who just wanted to walk and dress on the wild side.
Trash and Vaudeville was founded by Ray Goodman in June of 1975. Ray discovered St. Marks Place at the age of 13, and never left. He was immediately attracted to the incredible energy that surged throughout the block. Whatever the scene was – Beatniks – Hippies – Glam – Punk – it was all going down on St. Marks Place.
Ray spent most of his free time on St. Marks Place. There was the Electric Circus, the Fillmore East, and CBGBs, all within a few blocks of the area. Some of the greatest Rock n’ Roll Meccas all right there. Ray’s love for Rock music inspired him to open a clothing store that would be entirely influenced by Rock n’ Roll.
Right away Trash and Vaudeville attracted musicians and bands looking to dress in a style that embraced their individuality and creativity. St. Marks Place has always been a gathering place for the ‘cool’, with an energy that still flows today.
The store has been in its original location since opening. The list of artists, musicians, actors, street dwellers, teenage rebels, and people from all over who have shopped at the store goes on and on.”
http://www.trashandvaudeville.com/index.html