Photo of the day: WAITING FOR THE BUS 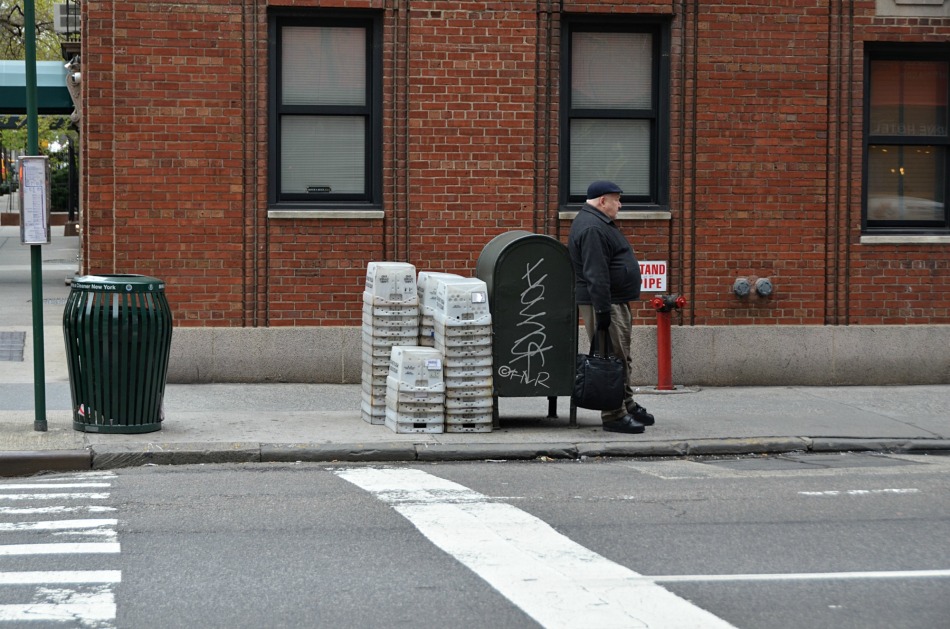 Waiting for the bus

Photo of the day: WAITING – for the M101 bus on Third Avenue, voted the 2012 “Schleppie of the Year”. The M101 was given the Schleppie Award as the city’s least reliable bus, more than a quarter arrive bunched together or with major gaps. The average wait time of 8 minutes is a non reality. When the bus does arrive, it can move as slowly as 3.9 mph (miles per hour) – that is slower than an amusement park bumper car. I watched this man for ten minutes . . . he gave up and decided to walk instead. I ♥ NY.

Photo of the day: THE FRIENDLIEST MOTORMAN ON THE #7 SUBWAY LINE

Interview of the day: THE FRIENDLIEST MOTORMAN ON THE #7 LINE ~ One of the friendliest motormen on the 7 line! A long time veteran of the rails, married with 2 children. He asked to remain unnamed and just be recognized for his bright smiling …face, so let’s just call him ‘Smith’. To familiarize you with the MTA lingo, the person in the front is the ‘motorman’, the person in the center of the train operating the doors is your conductor. There isn’t actually very much communication between the two. Most of the communication is between the motorman and headquarters.
He clocks 5 trips a day (the maximum allowed by the MTA.) I asked him what was the most memorable trip, Smith replied: “Yikes! They had me ride right into a tornado in April of 2010. My reaction was like that you see in a cartoon, your eyes pop out of your head, you can’t believe what you are seeing and you react just like a Warner Brothers cartoon…and then you pull yourself together and say to yourself ‘Keep the train steady and moving, you can do this’.”…and he did! His annoyances: “The people at headquarters giving us instructions aren’t here, they don’t know what we are facing or many times are up to.” Also the signals, he pointed out if any one of them is out or wrong it can cause the train to come to a halt and even cause damage, we stopped for a moment and he pointed one of them out and said: “Do you realize how old they are?” So what are his joys? His daily joy is approaching the 103rd Street/Corona Plaza stop. Smith said: “There’s a little bodega down there I can see from my booth and there are moms out front with their little kids. The kids see the train come to a halt and see me looking down at them, so I give ’em a big smile and toot the horn to see their eyes light up, it never gets old.”
His best story: Smith a long time ago met a young man along the line. Not very well dressed, struggling with school and finances. Smith gave him a pep talk and encouraged to keep in school and hang in there. He saw him routinely on his way to school, always in shabby clothes. A few years passed and he saw him dress a little better and ride at different times of the day. It turns out he was job hunting. A few more years passed and Smith pulls into a station one early morning and there at the very front of the platform was someone he thought he recognized. But this man was so well dressed. It was the same young man! He had gotten a decent job and was finally making a bit of money. Smith had watched this young man go through his and our daily struggle and watched him become a success. That makes Smith feel good to this day. As for me, I had a big smile, Smith had put a face and a warm smile behind the person we all take for granted daily. If you see him – give Smith a big smile – you’ll get one right back!

MAYOR BLOOMBERG IS A CHEAP BILLIONAIRE