Photo of the day: THE MUSIC MAN’S LAST VERSE

COLONY RECORDS CLOSES
(Deja view)
On July 10th, 2005 after Howard Johnson’s Restaurant closing auction had been held, their doors shut forever. It was a knife in my heart. Finding it unbearable to part with the retro Times Square treasure I just lingered outside, photographing the restaurant as much as I could so as to preserve every piece of it and not wanting to let go. As I held my camera up the window the manager of the Howard Johnson’s came out and asked me if I wanted to take one final look inside. I walked through the empty orange and green room of memories and we sat down in the back booth. He told me of his memories of the beloved restaurant and his personal story of how he at the time had no future job offers and sensed it was the end of an era for Times Square.
Seven years later on September 18th,  2012, Colony Records located in the art deco Brill Building, closed its doors for the final time. No closing sales or auction, just a final proud last day. I stopped by on Monday, September 24th to photograph the shell of what once was. Deja vu. I found myself inching closer to the doors and photographed the workers packing up the final vestiges of the store while the demolition crew had begun tearing down the past. My eye caught a man inside, obviously not part of the demo crew taking pictures on his cell phone for himself. From the distance I thought it was perhaps a foreman, a future owner or perhaps the Brill building owner. As I got closer to peek inside for myself, I recognized the man to be Richard Turk, the owner of Colony.

DEJA VIEW
I asked if he didn’t mind me taking some last pictures of the place, he was surprisingly kind enough to let me come inside. My memories of first discovering Colony began to flood out and began to choke up. Richard asked if he could record my story for a video log they are making of people’s warm and colorful memories, I was so honored to be a part of history.  We began to talk. I told him of Patti Lupone’s comment that Times Square is becoming a third rate shopping mall, that my personal ‘beginning of the end’ was the demise of Howard Johnson’s. That’s when Richard’s eyes lit up and began to open up. “That was the beginning of it! American Eagle Outfitters (which replaced HOJO) don’t care about the retail space below, they care about the giant neon advertising sings above.” He feels Mayor Bloomberg’s mall-ification of Times Square was a death sentence to those establishments above 47th Street. “There were no plans to include us up here on West 49th Street and above, we are merely side roads leading to the Square. We were never included.”
“I also can’t stop technology. If a singer wants sheet music for a song, they don’t have to buy the whole song book anymore. They can pull it up on the internet and it will even appear in their own key.” But the smell, the tactile holding of an lp, songbook, CD or sheet music is to many irreplaceable. In it’s heyday music’s royalty would come to shop from Michael Jackson, to Paul McCartney and Paul Simon. “I can tell you when Eartha Kitt came in, the store simply exploded!!! An absolute dynamite personality, I was obsessed with her song C’est Si Bon.” (For me it was “I Want To Be Evil”, which happened to be the first lp I bought at Colony.) Colony would still get the rush of the theater crowd before and after the shows, but other than those ties, it was dramatically slowing down. There was no forcing of them out by the landlord, it was solely his and his business partner Michael Grossbardt’s  decision to go out with their heads held high and above water. The Brill building management team even went so far as to mount a camera atop of the newsstand on the corner to record the foot traffic coming in and out of the store. No matter how good traffic Richard said was, they argued back with their video proof. It was time to close. 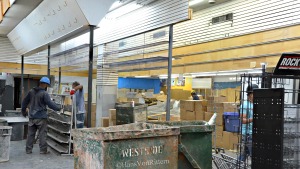 Richard reminded me that Jack Dempsey’s Restaurant, ‘the meeting place of the world’ used to be next door. At one time, the eleven story building housed song writer’s offices that had a clientele that would boggle the mind of music historians. Richard pointed to the closed store adjacent to Colony. “It has been their plan all along to turn the bottom three floors into a chain store retail space.” I immediately asked about the landmark status of the building. His surprising answer was that only the main entrance of the Brill Building and the upper floors are land marked, the bottom three floors are not! The retro brass doors with the musical clef handles were custom made by Colony in 1974 and Richard is taking them with him. If you look at the new plastic wrap that has encased the ground floor, there is a horrific rendering of plans for the 3-story clothing store “Generation”. Just what we need, another place to buy a t-shirt in Times Square – not a CD, DVD, sheet music or book, but a bra and a t-shirt. 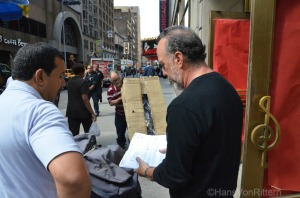 The dust was getting heavy and we exited the store just as the mailman stopped by. “I guess will have to admit we’re going to have a change of address” Richard said as he took his mail for the last time. I looked up at the iconic blue neon letters and asked quietly, “What happens to those?”.  Richard said one of the signs had been a continuous piece of neon and it just crumbled as they tried to take it down, but he remaining blue letters above the doors are individual and can be saved. “As for the Colony signs“ he answered, “if I had my wish they would go into either the Rock & Roll Hall of Fame or the NY Songwriters Hall. It’s still up for discussion…it’s just my desire not a fact yet.” I shook his hand and thanked him for this private moment and left as I kept having visions of Howard Johnson’s repeat in my head. I had to return. “Richard! I can’t let this moment go without taking your picture!”. We fumbled for a spot and Richard wanted to proudly stand by his custom doors one last time, I caught the moment. He said one last thing to me, “I stood outside the door as you found me today for 2 reasons. One, the dust and noise were getting overwhelming, but most important, I couldn’t look at my Colony in the condition it is in, I guess it’s the feeling one gets when your home is destroyed by some disaster. I stood there for 3 hours, and chatted with dozens of people, like yourself, who recanted some incredible experiences at the Colony. I left feeling truly humbled and blessed.” He smiled and fumbled for his business card, “I guess I can’t give you a Colony card anymore, I’ll just have to give you this one.” It reads: Richard Turk – music man. 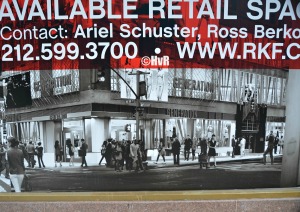