Photo of the day: INHALING

Photo of the day: INHALING – Beth’s gloves are socks with the toes cut off. Her shawl is the cut off bottom of a dress. The 1970’s denim jacket was found in the trash and made a great vest once the sleeves were cut off. “New York has cool crap you can find, but you gotta look at night,” Beth explained as she took a break from putting her New York wardrobe together. 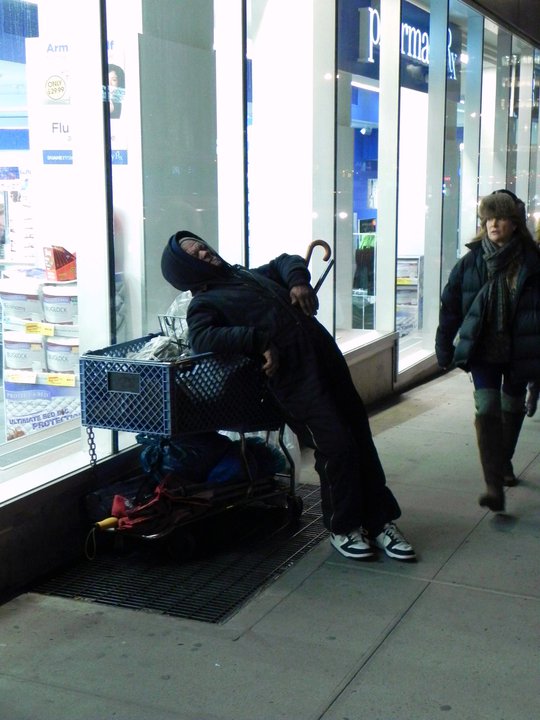 Photo of the day: THE ‘BITTER’ COLD – On today’s front page of many papers is a picture of police officer, Larry DePrimo in the bitter cold,  buying a homeless man a pair of shoes. The photo was taken on cell phone by a passing Arizona tourist and has gone viral world wide. While it is  a beautiful and touching story – I have a contrasting one I posted over a year ago here on Facebook.
On Tuesday February 11, 2011 that night it was 22 degrees freezing with wind chills below zero, this man seemed frozen over his cart. He did not have gloves and his hands had turned brown from frostbite. He did not move. No one helped him. Notice his left hand, his fingers are straight together, it is an unnatural way for your hand to be if you are ‘sleeping’. His hand was frozen. I stepped near the grate, the so called ‘warm air’ was at best minimal. I have been told to freeze to death is somewhat merciful, you numb and fall asleep. Whether he survived the night I don’t know. I am conflicted to hope he survived or if the merciful wish was for him to ‘fall asleep.’ It took me a long time to  flag a police car, they said he is on top of a grate and therefor “warm and fine”. I called 911 & 311 repeatedly, because supposedly the NYC law is that if it goes below freezing it is manadatory for the homeless to be brought to a shelter –  but  no one came. The traffic cop on the corner said there is nothing he could do. I went home with tears in my eyes and could not sleep that night.
It truly is a ‘bitter’ cold.
Here is the story of officer Larry DePrimo: http://www.nydailynews.com/new-york/generosity-immortalized-photo-article-1.1210565

Photo of the day: REMAINS OF THE DAY

REMAINS OF THE DAY: Ghosts of the The Wall Street Journal and his past seem to haunt this homeless man as he ponders his future outside of the Journal’s headquarters on Sixth Avenue.