Photo of the day: FLASH MOB SINGS HAPPY 103rd BIRTHDAY/THANKSGIVING TO ETHEL OF SUNNYSIDE ♫♪ ! – My neighbor and art patron Ethel Plimack celebrates her 103rd birthday today!! Thanksgiving + Hanukkah + 103 years! WOW! Fellow neighbor Patricia Dorfman and member of the Sunnyside Artist League organized a flash mob for 11:59am today when neighbors and their children appeared on Ethel’s doorstep and sang a special “Happy Birthday” to her! What a special day ! 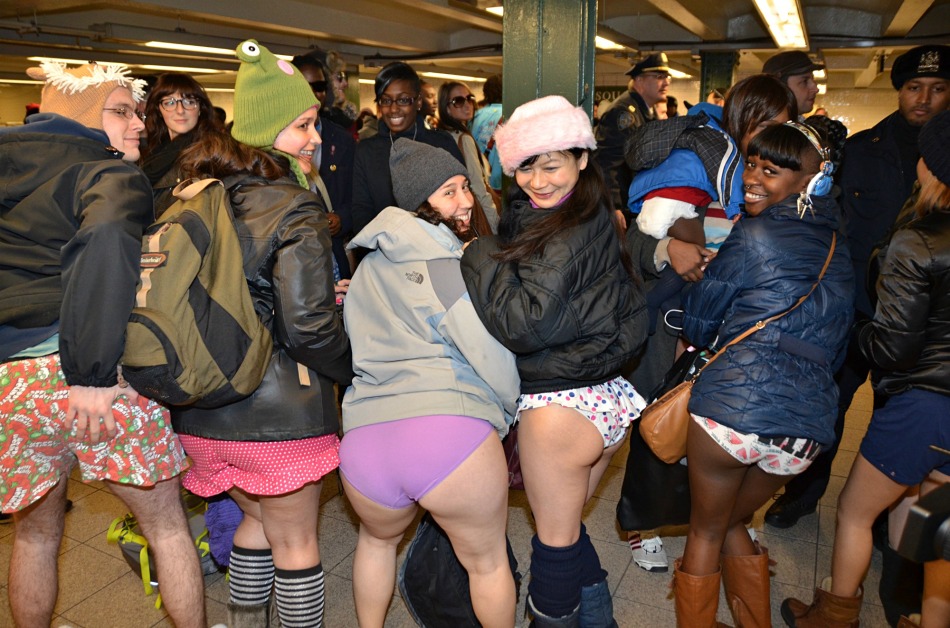 FLASH MOB – 12TH ANNUAL NO PANTS SUBWAY RIDE!: The No Pants Subway Ride is an annual event staged by Improv Everywhere each January in New York City. It gives the true meaning to ‘flash mob’ 🙂 . The mission started as a small prank with seven guys and has grown into an international celebration of silliness, with dozens of cities around the world participating each year. The idea behind No Pants is simple: Random passengers board a subway car at separate stops in the middle of winter without pants. The participants do not behave as if they know each other, and they all wear winter coats, hats, scarves, and gloves. The only unusual thing is their lack of pants.
The event drew over 5,000  partici(no)PANTS  in New York City alone, secretly meeting at 6 different meeting point throughout the city. The event has grown to international status and takes place in 28 countries around the world and 60 cities! All aboard!!
“I see London, I see France, I see you in your underpants!”

Photo of the day: SANTACON CABY

SANTACON CABY: Yesterday approximately 22,000 Santas of all types and styles descended on New York for the annual Santacon celebration.
There was fat Santa, tall Santa, dirty old man Santa, naughty Santa, Grinch Santa, baby Santa, zombie Santa, flasher Santa, disco Santa, leather Santa, biker Santa, gay Santa, Star Wars Santa, pimp Santa, punk Santa, hippie Santa and endless more elves and Mrs. Claus’s to match !
It is sort of a flash mob idea. The secret meeting place is only revealed on Facebook and Twitter shortly before the day of Santacon and they all meet in mass and create a huge sea of red. Imagine Christmas shopping in New York and all of a sudden the streets are  filled with Santas as far as they eye can see. Unfortunately I couldn’t participate because I had to give a tour, but here is your average scene yesterday: Buses full of Santas, subways full of Santas, bars full of Santas, cabs full of Santas – ho – ho – ho ! ! !
http://nycsantacon.com/
http://www.facebook.com/SantaconNYC