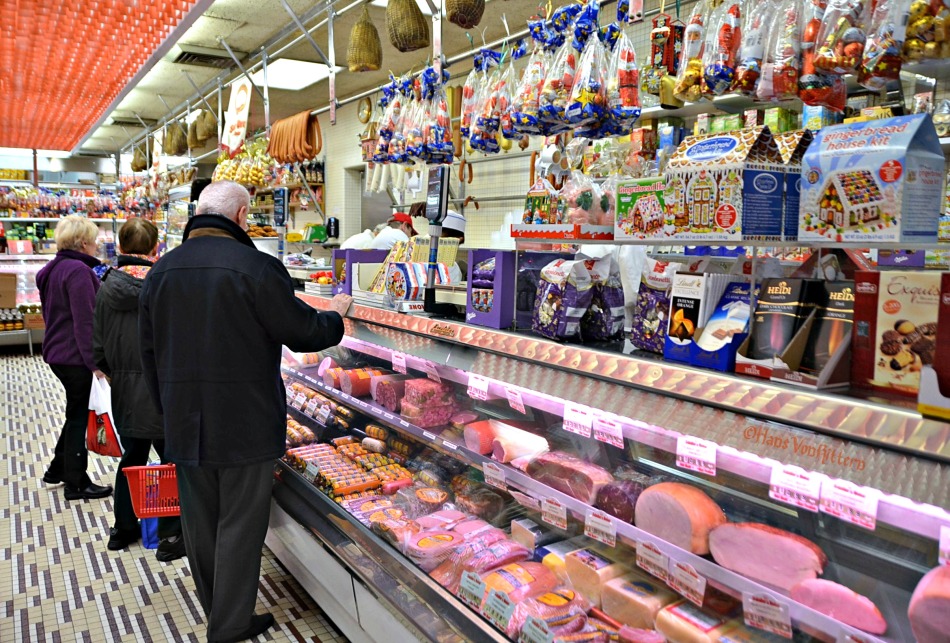 Photo of the day: SCHALLER & WEBER’S GERMAN DELICATESSEN in YORKVILLE FOR CHRISTMAS & NEW YEARS – At the turn of the century from 1890 – 1910 one third on New York City spoke German, today hardly anyone does and instead you hear Spanish, Russian and Chinese. I was born in 1955 and as a child we would go to the German section of the city named Yorkville. Yorkville’s center street was East 86th Street and it’s surrounding streets. In this area you could still here strains of “wunderbar” and ooom-pah-pah ♫♪ all around you. You could buy everything from back home: Mecki books, Salamander shoes, Zarah Leander and Heino records, Teewurst, Loden coats, Tyrolian hats, beer steins, wooden nut crackers, Lübeck Marzipan, German magazines and newspapers and all the wiener schnitzel and beer you wanted.
That was then, today there are only 2 establishments left that I know of. The Heidelberg Restaurant (1648 Second Avenue) where today the little dark haired Guatemalan waiters wearing (much too big) lederhosen tell you the day’s specials in a heavy Spanish accent. But…there is one staple that has remained – Schaller and Weber, opened in 1937 at 1654 Second Avenue/86th Street, a German delicatessen where the white haired old German butchers with German accents still politely slice the fresh deli meats daily.
When I was a little boy, this place was heaven to me and still is. You can just lock me up behind the deli counter and leave me in there for a week. Ahhh! The smoked hams, the dozens of salamis, the stuffed peppers, stuffed veal, weiß wurst, Westphalian ham and my obsession – rouladen! Rouladen are very thin slices of beef, rolled up with spices, bacon and onion inside, pan fried with a rich dark gravy, add boiled potatoes and you’re set. Then there are also the wonderful chocolates and marzipans, sauces, white asparagus, smoked fish, hearty breads, Bahlsen cookies, Maggi and Knorr spices and a fine assortment of cheeses.
For Christmas and New Year in 2013, Schaller and Weber is that one place I can still retreat to and relive my childhood, inhale deeply and feel at home. I’m ready to order all the meats, cold cuts and cookies for New Years Eve and Day. The store, (thank god) has hardly changed.  I go inside and it is Christmas/Weihnachten 1962 and I’m standing in line with my numbered ticket to be called as I am fixating on all the goodies I hope my mother will buy for the Christmas holidays, always topped off with the treat of a Lübecker marzipan bar. Some kids dreamed of being locked up in toys stores and candy shops – I dreamed of being locked up in Schaller and Weber! Fröhliche Weihnachten! Frohes neues Jahr!

Photo of the day: OOM PAH PAH, GERMANS ARE WUNDERBAR!

Photo of the day: OOM PAH PAH, GERMANS ARE WUNDERBAR! – At the turn of the last century one third of the population of New York spoke German, today hardly anyone does anymore and the all German neighborhoods I grew up with are gone. East 86th Street in Manhattan and Ridgewood Queens were my “nachtbarschaften” with all German shops and restaurants. As of the 2000 census 255,536 New Yorkers reported German ancestry but not necessarily German speaking. In the middle of the 19th century, Little Germany, situated in what is now termed Alphabet City, was the first non-English-speaking urban enclave in the United States.
Nonetheless, the 56th German-American Steuben Parade is ready to march up Fifth Avenue this Saturday, September 21st, at 12 Noon, under what will likely be a clear blue sky and the New York City sun! At last count, parade organizers expect approximately 5,000 marchers to go up Fifth Avenue, most of them in marching bands, dance groups, Trachten, in Karneval costumes or uniform. “Putting the parade line-up together this year was a tremendous joy,” says Steuben Parade General Chairman Lars Halter. “We have 20 groups from Germany in the parade, plus one group each from Switzerland and Canada.” These groups range from the Polizeimusikkorps Basel to members and staff of a kitchen museum near Hannover, who present traditional cooking outfits. Groups include three well-known Karveval dance troups: Blau-Weiss Sarnia from Ontario/Canada, “De Hoppemötzjer” from Cologne and the “Wild Dancers” from the town of Nonnweiler. There will be several Schützenclubs in their traditional uniforms.
The 2013 Steuben Parade marches up Fifth Avenue from 68th to 86th Street, leading into New York City´s largest Oktoberfest, which has been sold out for weeks. Tickets to the Grand Stand can still be bought in our online store, and there are many blocks on Fifth Avenue to enjoy the parade for free.
Also, the Steuben Parade will once again be broadcast live, for the third time in a row. The program can be seen on WNET (Channel 13) on Saturday from 12-2 PM. There will be a repeat of the parade on Sunday at 9 am on WLIW (Channel 21). The parade broadcast will be hosted by legendary supermodel and former Steuben Parade Grand Marshal Carol Alt and renowned newsman and multiple Emmy winner Larry Mendte.