Photo of the day: “GREY GARDENS” BIG AND LITTLE EDIE ARE BACK IN GRAND CENTRAL TERMINAL

Photo of the day: “GREY GARDENS” BIG AND LITTLE EDIE ARE BACK IN GRAND CENTRAL – One of the most riveting, entertaining and yet sadly disturbing documentaries in the last 50 years is the story of Little and Big Edie in “Grey Gardens” 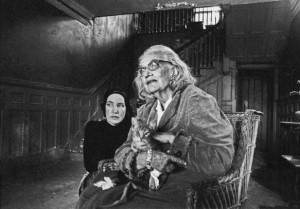 Edith Ewing Bouvier Beale (1895–1977), known as “Big Edie”, and her daughter Edith Bouvier Beale (1917–2002), known as “Little Edie”, were the aunt and the first cousin, respectively, of former U.S. First Lady Jacqueline Kennedy Onassis. The two women lived together at Grey Gardens for decades with limited funds in increasing squalor and isolation. The house was designed in 1897 by Joseph Greenleaf Thorpe and purchased in 1923 by “Big Edie” and her husband Phelan Beale. After Phelan left his wife, “Big Edie” and “Little Edie” lived there for more than 50 years. The house was called Grey Gardens because of the color of the dunes, the cement garden walls, and the sea mist

In the fall of 1971 and throughout 1972, their living conditions—their house was infested by fleas, inhabited by numerous cats and raccoons, deprived of running water, and filled with garbage and decay—were exposed as the result of an article in the National Enquirer and a cover story in New York Magazine after a series of inspections (which the Beales called “raids”) by the Suffolk County Health Department. With the Beale women facing eviction and the razing of their home, in the summer of 1972 Jacqueline Onassis and her sister Lee Radziwill provided the necessary funds to stabilize and repair the dilapidated house so that it would meet village codes.

Albert and David Maysles became interested in their story and received permission to film a documentary about the women, which was released in 1976 to wide critical acclaim. Their direct cinema technique left the women to tell their own stories. The film went on to become an award wining Broadway Musical staring Christine Ebersole and Mary Louise Wilson; and then award wining film with  Drew Barrymore and Jessica Lange.

After Big Edie died in 1977, Little Edie was forced to put Grey Gardens on the market. Edie was distraught when she found that most of the prospective buyers wanted nothing more than to demolish the home and build a brand new one on the beachfront lot; never one to waiver, Little Edie refused to sell the home to anyone that did not promise to restore the mansion to its former glory. Ben Bradlee, the former executive editor of The Washington Post, and his wife, the writer Sally Quinn, made that promise and bought Grey Gardens from Little Edie in 1979.

The home was fully restored, the gorgeous gardens were brought back to life, and a swimming pool was added. The home now hosts many parties and charity events yearly and has been featured in several architectural and home décor magazines. In the June 2003 issue of Town and Country, Sally Quinn says that her real estate agent initially tried to discourage her from buying the home; however, Little Edie was the ultimate salesman declaring, “All it needs is a coat of paint!”

So, it was to my great delight and surprise that perhaps “Big” and “Little Edie” aren’t really gone, they are just living in a grander home – Grand Central Terminal! I spotted the pair while rushing home and immediately was fascinated at the resemblance and fell in love with them. 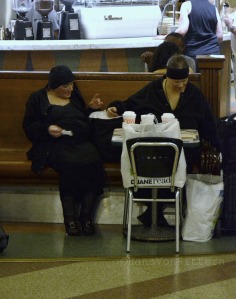 The ‘Edies’ in discussion 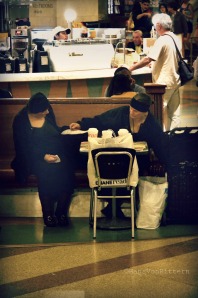 Details/similarities to observe: They are homeless, the doubled Duane Reade bags are always a clue. They are enjoying some drinks people had left behind on other tables. Their luggage/belongings closely guarded nearby. Despite their homeless situation they are in good spirits and ‘impeccably’ dressed, oddly similar to the Beales. ‘Big Edie’ has the scarf over her head, matching all in black, the black nylons hide the swollen bandaged ankles, the diamond studded shoes make her feel pretty. ‘Little Edie’ matches mom in all black, with head band to match. Daughter dotes on mom looking lovingly into her over made face. Their desperate situation hasn’t robbed them of their grande style and their elegance, they are in their own world. I only wish that I had the time to sit nearby and overhear their conversation. I will look for them on my next visit to Grand Central ‘Gardens’…