Photo of the day: THE BLOOM IS OFF THE ROSE, FAMED ROSELAND CLOSES WITH LADY GAGA AS FINAL ACT 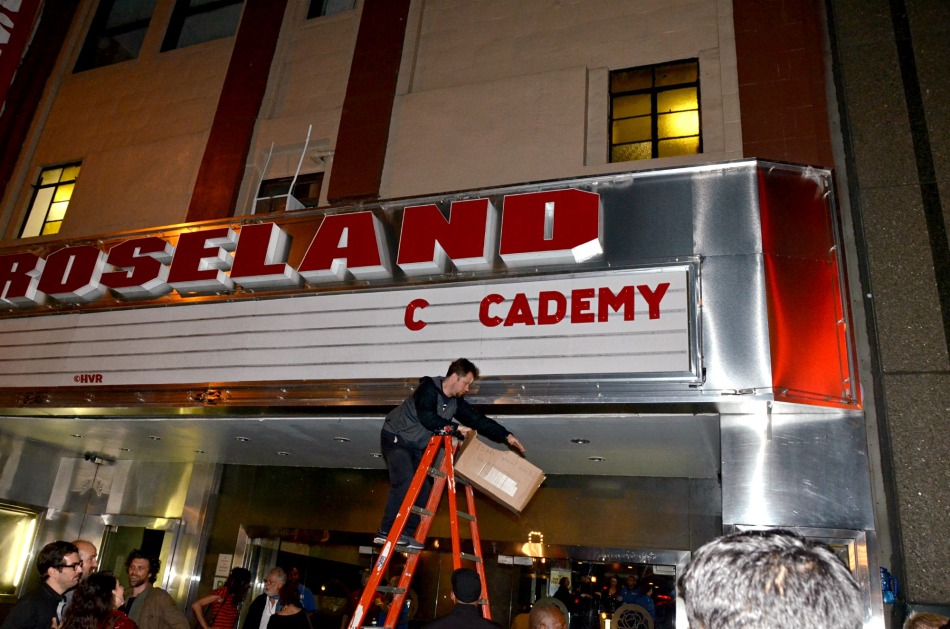 Photo of the day: THE BLOOM IS OFF THE ROSE, FAMED ROSELAND CLOSES – Another knife in the heart of New York’s theater district was last night’s closing of the iconic once dance hall, now concert and party venue Roseland. It went out with a bang as Lady Gaga rocked the house – now it falls silent…the next sound you hear will be that of the wrecking ball. It is with head spinning disbelief that yet another historic piece of New York will be replaced with a tall mirror glass building fur the über rich. The year 2013 saw more (almost daily) closings and tear downs of long time establishments than in recent memory – all part of the mayor Bloomberg’s greedy search and destroy tactic of anything that is (not so) old, is just out of the reaches of being declared a landmark and therefore won’t face the trials of court injunctions against it’s demolition. Zoning law variances have become the norm and for a price – history, building restrictions and the heart of the city mean absolutely nothing. The average price of buying a New York City council member (like mine, Jimmy Van Bramer) is $10,200 – buy a few council members and you can build what you wish, they will magically ‘vote’ your way.
Roseland started on 51st Street as a 1919 dance hall for ‘refined dancing’, slowly that evolved to ‘dance hostesses’ who offered dances for 11¢ a dance (think film “Sweet Charity”). From white ‘refined’ music it evolved into a swinging big band and jazz club featuring the likes of Louis Armstrong, Count Basie with his “Roseland Suffle”, Chick Webb and Ella Fitzgerald, Glenn Miller, Frank Sinatra to Madonna, Beoncé and Donna Summer and all the other major music acts of our time. The original club closed and reopened in 1956 one block over on 52nd Street in a former ice rink. Slow dancing turned into disco nights and rock concerts. Infamous underground parties (Black Party), fan shows, conventions, new and old music groups appeared here or made their reappearance here, for example disco diva Grace Jones in 1978 broke through a brick wall on her motorcycle and then did her act surrounded by tigers. She made her grande reappearance in 2012 and hadn’t changed a bit (see my old post).
And now along with the Lenox Lounge in Harlem, Colony Records in Times Square, South Street Seaport’s Pier 17, and endless other victims of this genocide of history – you can add The Roseland Ballroom. Is this what it is like to grow old? You loose everything around you? Or is it the voracious greed of our destructive former mayor Bloomberg, who in his twelve years of being mayor has gone from being the 18th richest man in America worth $18 billion, to becoming the 10th richest man in America now worth $31 billion . . . coincidence, it think not. Mayor DeBlassio – are you doing ANYTHING to stop this genocide of a city’s history? DeBlassio? DeBlassio?
The Roseland Ballroom
http://en.wikipedia.org/wiki/Roseland_Ballroom
Roseland the 1977 film
http://en.wikipedia.org/wiki/Roseland_(film)
My GAGA review:
GAGA said goodbye to Roseland in style! For those of you who don’t know better/are too young, THIS is what the awesome club scene used to be like. This was a rare treat for the lucky privileged thousands chosen that experienced one of the most iconic goodbyes to a club ever. If you are die-hard fan you get there early, stand for hours, run to the front and Lady G let’s you touch her boobs! Sweating (excuse me – glistening) on the dance floor, sharing that mass experience is a dying experience. The audience becomes a pulsating “one” with each other and the artist. No stadium shit like Barclay for me! Music hard core! Roseland has been around since 1919! It has hosted the likes of Louis Armstrong, Count Basie with his “Roseland Suffle”, Chick Webb and Ella Fitzgerald, Glenn Miller, Frank Sinatra to Madonna, Beonce and Donna Summer and all the other major music acts of our time. To be able to experience Gaga in such an intimate setting and touching farewell makes those who attended extremely lucky. R.I.P. ROSELAND

Mondays on Memory Lane – STARBUCKS USED TO BE A NEW YORK DISCO!

Mondays on Memory Lane – STARBUCKS USED TO BE A NEW YORK DISCO! – At the height of the disco craze, when there was a disco every few blocks in New York City, themes became the thing to separate a club from the crowd. There were circuses, mermaids, big band swing orchestras, human pin ball fists, ice skating, drag, dancing water fountains, roller skating featured in places such as planetariums, warehouses, garages, factories and even a deserted subway station.
The life span of a club was as follows:
1. Invite the gays and hope it turns into another Studio 54.
2. The straight chic crowd discovers it from their gay friends.
3. The gays leave because it isn’t “in” anymore.
4. The ‘bridge and tunnel crowd’ arrives aka Brooklyn, Bronx, Queens, Staten Island and (god forbid) ‘Jersey’.
5. The death knell “Tito Puente Night”
6. Closed
On Thursday evening, March 26th, 1981, in a (then) deserted section of the city, at 151 East 45th Street between Lexington and Third Avenues – STARBUCKS Disco opened with great fanfare. In order to attract a gay crowd while not wanting to put off and also attract the straight crowd from the beginning, a theme was needed, so rather than leather, glitz or drag – a cowboy theme was chosen, hopefully equally appealing to both gay and straight. Opening night was a mad house.

The old Danny’s Hideaway (above)
The location itself used to be Danny’s Hideaway bar and restaurant containing four floors where newspapermen, cartoonists and magazine editors used to hang out. The new renovation turned the space into a multi-leveled disco with an identity crisis. There was a working fireplace which remained from the old bar still on the first floor. Since they were desperate to attract all crowds, there was a different atmosphere and music on four floors. A slide connected the floors so that you could fly down the chutes from floor to floor. There was a dance floor on every floor—two of which were disco (one of the dance floors was lighted from underneath ala ‘Saturday Night Fever’), one rock and the top floor was country western complete with a mechanical bull! There was DJ Jim Maxwell on the first floor and DJ Dan (pooch) Pucciarelli on the third floor. With no Studio 54 elitist door policy in place, they pretty much let anybody in since they needed to fill such a big space. $15 got you in the door with free drinks all night…yes, free drinks served in tiny plastic cups which completely littered the floor. It was also one of the very few discos that advertised on local TV stations.
What doesn’t work is to mix cowboy boot wearing, plaid shirted country music lovers with platform shoed, bell-bottomed glittery disco dancers and leather clad rockers. It was a disaster. Each floor’s music blasted the music so loud that it thumped through your chest. Imagine hearing Donna Summer, Duran Duran and Alabama blasting in one building at the same time – insane! The gays/chic Manhattan crowd wrote off the club opening night and the disco life cycle was rapidly overnight sped up to step #4 – ‘bridge & tunnel’. Eventually it turned into an after work hangout for the working class and weekends it was dead. The disco/dance crowd wanted to get dressed up and shine on the weekends, not mix with the working stiffs they were trying not to be, inevitably by 1984 Starbucks Disco closed. Today the name Starbucks is synonymous with the world wide caffeine giant it has become with over 20,891+ locations world wide, 13,280+ in the USA and 172 locations in Manhattan…so necessary for their public bathrooms we have come to seek out.