Photo of the day: EVERYBODY WAS HOME SATURDAY NIGHT

Photo of the day: EVERYBODY WAS HOME SATURDAY NIGHT – Living in New York City many of us have an Alfred Hitchcock-like “Rear Window” view. Mine happens to be out the front of the building onto 46th Street, one of the nicer streets in Sunnyside and Sunnyside Gardens.

A few weeks ago New York City was visited by a chilling Arctic Vortex, but lately it had warmed back up to 50F (10C) degrees and I was keeping my window open a bit nights. But last night the cold temperatures came back and I went to my window at 8:00pm to close it for the night. As I looked out my window, I noticed a warmer glow than usual coming from my street. There was more than just the warm glow of the street light, but also the entire building across the street seemed to glow like a miniature toy model. It was then that I noticed that something very unusual was occurring in the apartment building across the street – every single apartment, on all six floors, every window had lights on, everybody was home! That rarely ever occurs! This is New York, someone is usually out on an all night job, at a party, with a date, shopping, vacationing or what not. But on January 18th at 8:00pm, on one of those cold January nights…all these diverse neighbors at 41-29 46th Street had all decided to be snug as a bug and snuggle up to their big flat screen TVs, computers, cat, dog or loved one. As diverse as they are, for this night they were “one”.

(And no, I didn’t get out my Jimmy Stewart binoculars to look in the windows, I just enjoyed the warm glow of the city life.)

Photo of the day: IDENTITY CRISIS 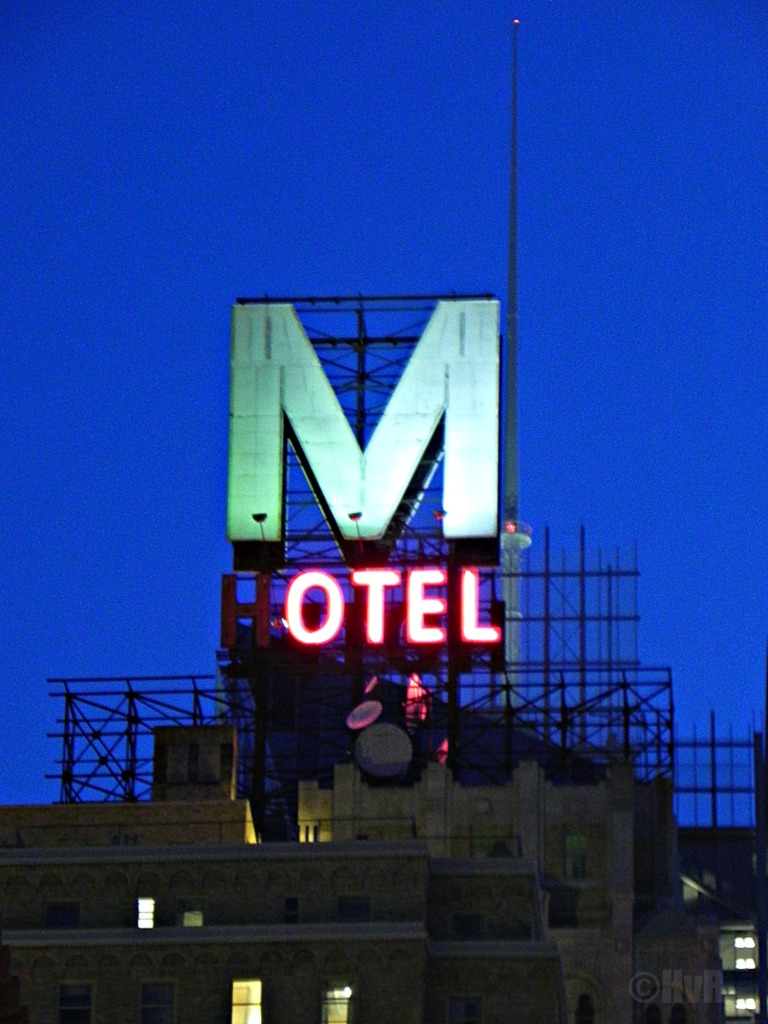 IDENTITY CRISIS: the Milford Plaza Hotel in Times Square seems to be suffering from a bad case of identity crisis. Due to an electrical shortage the full service hotel’s sign seems to be confused between ‘Motel’ and ‘Hotel’. (Slightly reminiscent of the Bates Motel in Alfred Hitchcock’s film “Psycho”).